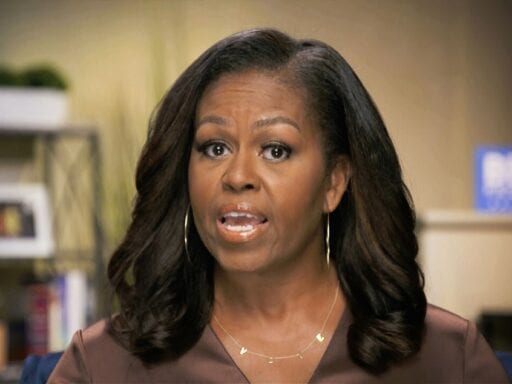 The former first lady wore a custom-made gold “VOTE” necklace as she delivered her speech. | Democratic National Convention via AP

The necklace went viral during the former first lady’s speech at the DNC on Monday.

For Michelle Obama’s speech on the first night of the Democratic National Convention, the former first lady wore a delicate gold chain that featured charms spelling out the word “VOTE.” The visual message from the custom-made accessory was clear, even if viewers didn’t tune in to Obama’s speech and caught a glimpse of her. Democrats need to vote in November as if their “lives depend on it,” with turnout rivaling that of the 2008 and 2012 presidential election.

“We’ve got to show up with the same level of passion and hope for Joe Biden,” the former first lady urged. “We’ve got to vote early, in person if we can. We’ve got to request our mail-in ballots right now, tonight, and send them back immediately and follow up to make sure they’re received.”

Having served as a two-term first lady, Obama is aware of how clothes can communicate a message. She has become a style influencer in her own right, as one of the most recognizable political and public figures of our time. From designer gowns to workwear, Obama’s clothing choices tend to quickly sell out and become the topic of rampant media fascination.

As Eliza Brooke reported for The Goods, Obama’s fashion legacy has been “one of approachability, of championing up-and-coming American designers, which mirrored her warm demeanor.” Since she’s left office, the former first lady has been able to wear more dramatic, stylized pieces without fear of the steep sartorial scrutiny of the title.

The “VOTE” necklace is a simple statement piece, a custom design for Obama by Chari Cuthbert, a young Black designer based in Los Angeles. Cuthbert, who owns a small boutique, told the Daily Beast that she “had no idea where [Obama] was going to wear it,” but was pleasantly surprised when the $430 necklace appeared during her convention speech.

During the tour for her memoir Becoming, Obama has expressed that she’s mindful of how her sartorial choices can elevate designers, particularly younger, Black, and female artists. In the Netflix documentary of the same name, Obama — who wore a silver script necklace with the words “Becoming” from a different designer — also addressed the importance of optics and fashion as a public figure, acknowledging how “fashion for a woman predominates how people view you.”

Online, many women have expressed their interest in ordering a similar “VOTE” necklace in the lead-up to the presidential election. One Twitter user joked that if the Biden team starts selling one, they’ll be able to “fund ads for the next 77 days.” The enthusiasm around the necklace highlights not just the long-lasting popularity of Obama and her fashion choices, but voters’ growing interest in political apparel to visually represent their beliefs. For Obama, though, the necklace’s message is telling: Remember to vote in November.