Mike Pence on whether he wants to overturn Roe v. Wade: “I do” 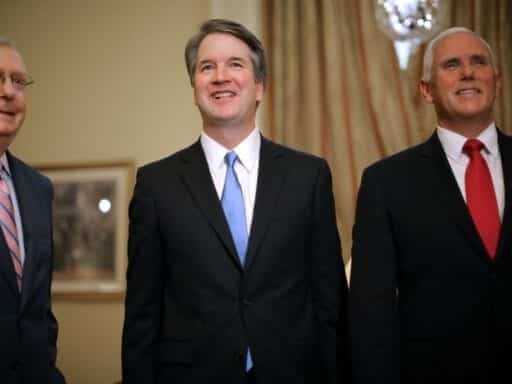 But the vice president wouldn’t say whether Brett Kavanaugh would make that happen.

When asked in an interview with CNN’s Dana Bash about wanting to overturn Roe, Pence responded, “Well, I do.”

“But,” he continued, “I haven’t been nominated to the Supreme Court.”

CNN’s Dana Bash: “Do you still want Roe v. Wade to be overturned?”

Kavanaugh’s nomination has made Roe v. Wade one of the potential battles of the judge’s confirmation hearings. Kavanaugh’s ascension to the Supreme Court could deliver a 5-4 majority to overturn Roe v. Wade, the 1973 landmark case that protects abortion rights.

Pence, however, dodged the question as to whether Kavanaugh would fulfill his and the president’s campaign promise to reverse that decision.

“Well, as I said, I stand for the sanctity of life,” Pence said. “This administration, this president are pro-life, what the American people ought to know is, as the president said today, this is not an issue that he discussed with Judge Kavanaugh, I didn’t discuss it with him either.”

Pence’s obfuscation appears to be part of a larger strategy to downplay how Kavanaugh could tip the balance of the Court to undermine Roe and the 1992 decision Planned Parenthood v. Casey, which affirmed Roe — while also sending a wink to the administration’s evangelical base.

This is a strategy — “we’re just picking a guy who’ll follow the Constitution, we’re not even talking about the one case we always talk about” — that is likely to be followed throughout Kavanaugh’s confirmation hearings. His ascension to the Supreme Court could hinge on the votes of two Republican senators, Susan Collins (R-ME) and Lisa Murkowski (R-AK), who are both supportive of abortion rights. (Though, so far, Collins and Murkowski haven’t given Democrats much hope that they’ll defect.) And beyond the halls of the Senate, about two-thirds of Americans say they don’t want to see Roe overturned.

Pence, of course, has remained consistently anti-abortion, so his confession that he still wants to overturn Roe isn’t a surprise. As for Trump, he’s said in the past that he’s pro-life, though he’s painted himself as anti-abortion as a candidate and as president.

Trump did say he wouldn’t discuss Roe during the vetting process, though Kavanaugh was selected from a list of preeminent conservative judges. The president reiterated this during his Supreme Court announcement Monday. “I do not ask about a nominee’s personal opinions,” Trump said. “What matters is not a judge’s political views but whether they can set aside those views to do what the law and the constitution require.”

But as Vox’s Dylan Matthews has written, Kavanaugh’s presence on the Court definitely puts Roe at risk:

Matthews points out that this is a clear dodge: As a DC Circuit judge, he has to honor the precedent of the Supreme Court. On SCOTUS, not so much.

As Matthews points out, there’s plenty of evidence that hints at Kavanaugh’s opinions on the matter — from interviews to court decisions. It’s impossible to know exactly what decisions Kavanaugh will take part in if he becomes the next Supreme Court justice — but Pence may be closer than ever to his wish.

Tuesday’s impeachment hearings were a disaster for Republicans
A Democratic senator tried to get Brett Kavanaugh to commit to an FBI investigation. He would not.
Harvey Weinstein’s trial reveals the trauma of testifying
Alpha takes a conventional boy-and-his-dog tale and does something wholly unexpected with it
Air pollution is much more harmful than you know
Blockbuster should have killed Netflix. What happened?