Millennials are getting screwed by the economy. Again. 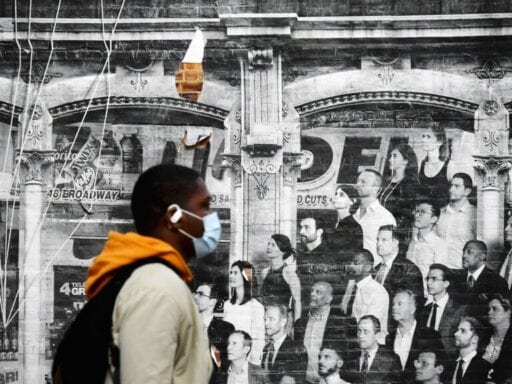 Share
Loading...
A New Yorker walks past a mural by french photographer JR on April 20. | Angela Weiss/AFP via Getty Images

Two once-in-a-lifetime crises have had devastating consequences for millennials.

Here’s a brutal statistic: One poll found 52 percent of Americans under the age of 45 have either lost their job, been put on leave, or had their hours dramatically cut as a result of the coronavirus pandemic, compared to 26 percent of people over the age of 45.

In other words, millennials are going to bear the brunt of this economic crisis, just as they did in 2008. The Great Recession upended the economy as many millennials were entering the labor force for the first time. The pandemic and the resulting economic shock have hit as many are entering their 30s and could erase any gains they’ve made.

Annie Lowrey, an economics writer at the Atlantic and the author of Give People Money: How A Universal Basic Income Would End Poverty, Revolutionize Work, and Remake the World, argued in a recent piece that millennials are essentially “a lost generation,” having entered the labor force during the Great Recession in 2008 and now facing a second “once-in-a-lifetime downturn.”

Millennials, Lowrey argues, have never really had any economic security, and this pandemic all but guarantees “that they will be the first generation in modern American history to end up poorer than their parents.”

I spoke to Lowrey about what makes the plight of millennials “unusually bad,” why this crisis is especially devastating for young workers, and if she thinks millennials have a chance to escape the financial precarity that has defined their lives so far.

Every generation seems to get screwed economically, at least once or twice. What’s unique about the plight of millennials?

You’re definitely right about that, and I’m not trying to hold a misery Olympics here. I don’t even think millennials are a historically screwed generation compared to all the generations that preceded us going back to time immemorial. But it’s also true that there’s a huge economic body of literature that shows that graduating into a recession, like millennials did in 2008 and 2009, is unusually bad.

Unusually bad in what ways?

The word they use in the economic literature is “hysteresis,” which basically just implies a scarring. So you get these scars in the labor market and it takes a very long time to heal. If you graduate into a recession, for example, it leads to high unemployment and large earnings losses at the time, which you would expect. And then, it leads to lower earnings trajectories for decades and even a lifetime, which is maybe more unexpected. It basically means that you don’t rebound in the way that other people rebound.

So all this means that millennials have not had the same wealth trajectory compared to previous generations. And you can see this when you compare their wealth at the same point in their life cycle with older generations — millennials are just doing worse. And that’s after a decade of economic growth.

I think there’s something really discomforting in that because it means some kind of stratification on the basis of age, but it also means that decades of economic advancement didn’t do anything for a whole generation of people.

How much of this economic precarity for millennials is about bad timing, about the reality of entering the labor force during a massive recession, and how much of it is about the nature of capitalism today and the kind of world it has wrought?

It’s a little of both, right? Some of it is just an accident of timing, but there’s also the reality that millennials were thrown into an economy that was structured to manufacture precarity for them. So obviously a big factor is the Great Recession, which just took money out of their pockets and made it a lot harder for them. The second is the cost of going to college. Millennials have racked up more than a half-trillion dollars of student loan debt. That has had the effect of depressing their take-home pay and it’s made it really hard for them to buy houses, start businesses, start families, have children, and so on.

Millennials have largely been shut out of the housing market, in part because of a massive housing crisis that they didn’t cause, and this happened at a time when the prices were going up. So you had this nice wealth effect that really benefited older generations, especially baby boomers, and millennials instead had to keep on renting. And there’s about an eight percentage point gap between where we would expect the millennials to be and where they are in terms of home ownership, so that’s another big thing.

There are just a hundred threads you could pull on here. The fact that jobs are precarious and a lot of millennials have been stuck in piecemeal or gig work with no real security is obviously a problem. There are significant racial dynamics at work, too. Millennials are a really diverse generation, but white millennials have done a lot better than black millennials in particular.

So millennials were thrown off course by the Great Recession and now we’re facing another cataclysmic economic event with this pandemic. This crisis is hammering every demographic in different ways and at different levels. How will it impact millennials in particular?

All that said, the data that do we have from things like polls and credit card processors is terrifying. It shows that millennials are experiencing something somewhat different than older generations. Data for Progress just came out with a report that suggests that more than half of people under the age of 45 have lost their job, been put on leave, or had their hours reduced. And that’s roughly twice the rate of people over the age of 45. And I think that that makes some sense because millennials are disproportionate holders of a lot of the jobs that we know have been wiped out in the most dramatic terms — things like restaurants and bars, health clubs, yoga studios, or retail.

Older generations are likely to see more wealth losses as a result of this because they’re the ones who hold the most wealth. Millennials aren’t really holding a lot of stocks. They don’t own a lot of houses, but boomers do. And so, because of the decline in asset values, those paper losses will be actually relatively restrained for millennials. But that’s not really a good thing. In terms of income losses, I think that this is not going to be good for anybody — and I would really stress that: This is just an awful situation for everyone — but in terms of income losses, at least for right now, it seems like it’s concentrated among young workers.

There’s the debt trap, the home ownership problem, the affordability crisis, the lack of wealth accumulation, an unforgiving labor market — all the things that keep millennials on shaky economic ground. In these sorts of conversations, “neoliberalism” is the default boogeyman, the thing we blame for creating this precarious world we’ve inherited. What’s your origins story here? Who or what do you blame?

I think that there is a lot of blame to go around here, but I would step back and just say that this is the system that we have elected. We choose this system of laws and economic structures. None of this is a given. There’s no “invisible hand” insisting that we have precarity all the time. We choose this. We choose these rates of inequality, this racial wealth gap, we elected it. We choose to not help parents out until their kid is 5 with public education. We could’ve chosen another system, another world, like other countries have.

All of these are solvable problems in terms of policy. In a lot of ways, this isn’t even hard stuff. We’ve just chosen not to do it. Explaining why we’ve done this is just way above my pay grade. I would say that race is a huge part of it. We’ve chosen not to have this system I think in no small part because we’ve elected to make sure that white people have security that black families don’t. And this is the result.

I completely agree, but I just want to be clear right here because I know a lot of people will read this and say, “I didn’t choose this! I don’t want this,” and they’re obviously right. So I think we should be explicit about the “we” in your formulation.

Absolutely. I’d say that these social programs I’m talking about, like universal pre-K for all Americans, are really pretty popular. But I think that we have a system of government that doesn’t reflect that popularity necessarily. So the “we” here is just us as a collective, and particularly the people with their hands on the levers of power.

But you’re obviously right, there have been people pushing back against this for decades. So it’s hard to say who wants this and who doesn’t. I think the key point is that this isn’t merely a market outcome. The world we have has been shaped by policies our government has chosen. That’s so important to remember.

We’re still on the front end of this crisis and no one knows what’s coming, but what’s your best guess of what the economic order will look like on the other side of this pandemic?

That’s the question, right? I wish I knew. I think that economists are currently concerned that we are going to face a terrible snowballing recession that comes from business failures and sickness and loss of insurance on the other side of this. And I just don’t know that we have any idea of how we’re going to rebound from that.

You have optimists who are saying that we could still have a V-shaped recovery because the economy was pretty good going in, and this was like a gargantuan hurricane that came in and will pass over us in time. But I think now there’s a lot more concern that so much economic damage is accumulating that you’re going to end up with a pretty nasty long recession.

One thing we know is that younger workers who were more fragile are already being more hard hit. Older folks will suffer greater wealth losses, but at least they had that wealth cushion. I’m really worried about the children of millennials who are living in these homes that have been shattered by this crisis. I’m concerned about the intergenerational effects of this. How many kids are going to be food insecure? How many kids are going to be out of school for months and months and in really unstable housing and economic situations?

We have this whole generation of workers that have never really had any security to begin with, and now they’re being decimated again. It’s just awful and we still don’t have a real understanding of how bad it will get.