Mixing ketchup and mayonnaise isn’t new. Here’s why Heinz is trying to cash in on it now. 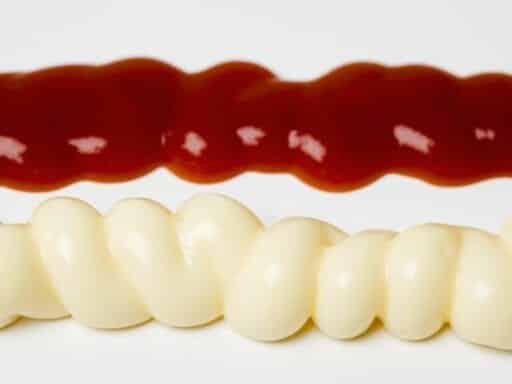 The condiment wars are heating up. Enter Mayochup.

Ketchup is a good condiment. It is humble. It is red. It is not, for most American palates, particularly challenging. It is salty but also sweet, with what National Geographic correctly identifies as “just the right amount of puckering twang.”

The king of ketchup is Heinz, which owns 60 percent of the ketchup market in the US and 80 percent in Europe. It is the red standard of ketchup. It is exactly as good as it needs to be and no better, which makes it perfect.

Yet ketchup is not, in fact, the reigning champion of American condiments. That honor goes to the rival spread mayonnaise. Though mayo sales have been down in the past several years, falling 6.7 percent between 2012 and 2017, the US still consumes a stunning $2 billion worth of mayo. That’s compared to a mere $800 million of ketchup — a fact Quartz attributes in part to the multitudinous uses of mayo. It is not just a dip or a spread but an ingredient, a staple in all kinds of dishes, most of which are available at picnics. The supreme ruler of mayonnaise is Hellmann’s, which controls just over 50 percent of the US mayo market, according to the Wall Street Journal.

Mayo is also an ingredient in Heinz’s latest product: “Mayochup,” which, as it sounds, is a mayo-ketchup hybrid and which, after much buildup, is set to hit grocery shelves this fall. As a ploy for virality, Mayochup has already worked, sparking controversy, as Grub Street explained, from people upset because they feel a prepackaged mayo-ketchup combo should not exist, and from people upset because it already does.

It’s obviously a play for attention in a cutthroat field of condiments, which is only growing more cutthroat as condiment innovation (and gentrification) reaches an ever more feverish pitch. “Condiments are more competitive than they’ve ever been,” Jennifer Healy, head of marketing for the Heinz brand, told the Wall Street Journal. “Ten years ago, it was much more simple.”

Ten years ago, maybe, you could get away with being plain mayonnaise and basic ketchup. Mayochup is evidence, though, that Big Condiment can’t get away with just offering the basics. Do people want Heinz Mayochup? We … don’t know. What we do know, based on what Heinz called “unprecedented passion surrounding this product,” is that consumers demand the option.

Mayochup’s American expansion started as something of a marketing stunt

This particular story — not the story of mayo-ketchup in general, but the story of Heinz’s Mayochup in America — began back in April, as Hellmann’s and Heinz both made plays for each other’s turf. Hellmann’s, champion of America’s actual favorite condiment, was introducing a product called “Real Ketchup,” billing it as a “reimagining” of the classic, with a more minimalist ingredients list, no high-fructose corn syrup, and no GMOs. (Heinz has a version with a very similar ingredients list as of 2010, but it is not the company’s flagship product.)

At the same time, Heinz was in the process of launching a new mayonnaise competitor, called … “Real Mayonnaise.”

But then shortly before the launch, Heinz started to notice a conversation bubbling on Twitter about Mayochup, which it had just launched in the Middle East.

”We immediately changed course once we saw the news of Mayochup gaining momentum with U.K. media and on social media,” Nicole Kulwicki, director of marketing for Heinz, told PRWeek. “Our goal was to jump in on the trending story as quickly as possible to take part in a relevant conversation for the brand and debut Heinz mayonnaise.”

On Twitter, Heinz posted a poll teasing the idea of Mayochup to American audiences.

Want #mayochup in stores? 500,000 votes for “yes” and we’ll release it to you saucy Americans.

“Saucy Americans” voted in favor of Mayochup. This week, Heinz announced the product will arrive on American shelves this month. (This was also announced with a poll, about where to launch first.)

Mayochup isn’t new, and it wasn’t invented by Heinz

As many, many people have pointed out, mayo-ketchup sauces widely exist already, especially in Latin America. According to Eater, the first incarnation of the stuff might be the Argentinian salsa golf — possibly invented by biochemist and future Nobel Prize winner Luis Federico Leloir (his 1970 prize was for something else — the Nobel committee has yet to recognize condiments) — but it is hardly the only incarnation.

And that’s okay! Not-new things come to market all the time. Mayo-ketchup sauces aren’t a novelty product, even if Heinz’s particular mayo-ketchup sauce is coming stateside because of a viral Twitter campaign intended to promote something else.

So perhaps it’s not fair to call Mayochup an attempt to reinvent ketchup. It already exists and has a history of not being ketchup. But what it does do is underline the overwhelming consistency of the ketchup industry; despite a boom in artisanal ketchup companies, the majority of Americans are still using Heinz.

In 2004, Malcolm Gladwell took on the issue in the New Yorker: Mustard had evolved, so why hadn’t ketchup? Things have changed since then, as smaller, more artisanal brands have started to come for Big Condiment. But while it is true the piece predates the rise of artisanal condiments — brownstone Brooklyn, for example, did not even get its artisanal mayonnaise store until 2012 — it is also true that no ketchup, even now, has come close to threatening Heinz’s hold.

Perfection is a dead end. Where do you go from perfection? Nobody wants Heinz ketchup to be better. “When I order my burger, I’m picturing the Heinz I’m going to bathe it in,” argued Ben Robinson at Thrillist in a screed against artisanal variations. “That very specific, very expected flavor element is part of why I ordered the burger in the first place — it’s just part of the deal. Ketchup should be a constant, not a variable.”

I have tasted artisanal ketchups. Sometimes, they are bad. Mostly, they are also good. I am against neither progress nor innovation. But Robinson’s point stands: Artisanal ketchup variations, with restaurant-specific twists, have never felt like an improvement. You could call this ketchup conservatism.

It’s possible, Gladwell suggests, that a new ketchup is just waiting for its moment — that a ketchup entrepreneur will stumble upon a ketchup variation people didn’t even know they were waiting for. “But it is also possible,” he suggests, that the rules that hold true for “virtually everything else in the supermarket don’t apply to ketchup.” There are the five core human tastes — sweet, salty, sour, bitter, and umami — and Heinz ketchup hits all of them.

So we got what we wanted, and soon we’ll have Heinz Mayochup. And if it’s a hit, someday, it will spawn a sea of more upscale versions, and Heinz will have to move on to selling us back a new new thing, something that — like mayo-ketchup — we probably already have.