Money Talks: How this self-employed couple pays for health insurance 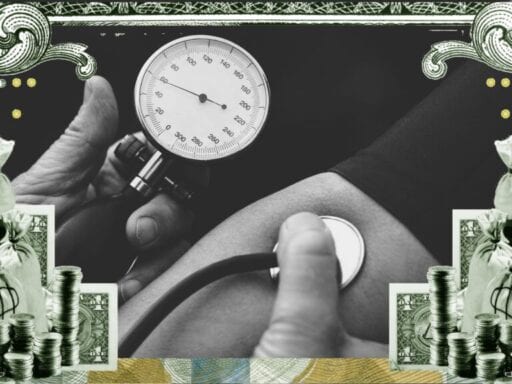 Dan hosts a podcast about the cost of healthcare — but it doesn’t actually provide him with it.

Meet Dan Weissmann and Devorah Heitner. Dan is the host of An Arm and a Leg, a podcast about the cost of health care that’s now in its third season. Although the podcast brought in more than $50,000 in 2019 from Patreon supporters and a partnership with the nonprofit newsroom Kaiser Health News, those funds went to paying editors, engineers, and other expenses — and independent podcasting, even when it’s about the health care industry, doesn’t come with health insurance coverage.

Devorah, who has managed a freelance career as an author, speaker, and consultant for over five years, restructured her business so that she could qualify as an employer and apply for group health insurance. She’s now responsible for running a company that provides insurance for herself, Dan, their 10-year-old son, and her employees — in addition to being the primary breadwinner and supporting her family on a high five figure income.

The following conversation is lightly condensed and edited for clarity.

Dan: We began 2018 knowing that I was doing a career change. We did not yet know that I would be starting a podcast, but we knew that I might not be in a full-time job with insurance and we knew that Devorah was still going to be running her business.

So, at the beginning of 2018, we said “we need to be ready for as many possibilities as we can.” One of those possibilities was that we wouldn’t like what was on the Obamacare exchange, but neither of us would be in the arms of an employer who could cover our health care needs. So the decision you made, right away, with a lot of foresight, was that it would be great to be a group. [Editor’s note: Dan is referring to the process of becoming the type of employer that can offer group health insurance coverage to employees.]

Devorah: I talked to some other business owners in my community, and a lot of them are solo contractors, but some of them are groups. We have a friend who runs a video production company with her wife, and she’s a relatively small group, and she referred me to her insurance broker and said, “Talk to him, he should be able to tell you exactly what to do.”

I also looked at, like, could one of us get a part-time job at REI or Whole Foods [in order to get health insurance] or something, and we considered that as a last resort, but neither of us really wanted to do that. We both are giving more than full time to our professional work, and we had, at that time, an 8-year-old. We didn’t want to be working at REI at night and not seeing our kid at all. It didn’t seem like a good plan — and a lot of those part-time employers that used to give good benefits, since the Affordable Care Act, have stopped.

So we talked to our friend’s insurance broker, and he told us exactly what we needed to do to become a group, and I did those things!

Dan: One of the things we wanted to be able to show was that this wasn’t a group that was formed just in time to file an insurance application.

Devorah: I did legitimately employ people [before becoming a group], it was just a matter of talking to them about being willing to be W2 employees.

Dan: I have a congenital heart condition, and it doesn’t bother me at all, but I need to get checked out once a year, and there are only so many places that specialize in monitoring adults with congenital heart conditions. None of them were covered under any of the ACA plans. It’s a couple of tests and a doctor visit, and when we added up the sticker price it would cost around $10,000 [in out-of-pocket costs]. That’s a major financial event in our lives, and it would be an annual thing.

So then I said “Wait, isn’t there an out-of-pocket maximum? Couldn’t we just budget? We’d have to spend a lot of money, but once we spent that amount, we’d be done.” But what I learned about the Affordable Care Act is that the out-of-pocket maximum only applies to things that are done in-network. So if those things happened outside of the network, there was no limit to what we might end up paying, and it wouldn’t count toward our out-of-pocket limit, or our deductible, for anything that was happening in-network.

Devorah: We live in the Midwest, so that’s more than our rent. It’s more than we pay for housing, and that’s with heat included. [Health insurance] is our single greatest monthly expense, and now the premium comes out of my business account.

Dan: It’s been a psychological transition, and an orientation transition from a business that started like an open-ended freelance project to this now runs like a proper business. Psychologically, we’re still playing catch-up to that.

Devorah: I’m also the sole breadwinner because An Arm and a Leg is still a startup. An Arm and a Leg is bringing in great money from supporters and that’s all going toward the editor, the producer, the engineer — the podcast is doing great but Dan isn’t taking a salary. So there is pressure on me as the sole breadwinner, which was never how we had done things in the past.

Dan: We talk about your role on the show as chief investor, and we talk about the length of the runway for the show, and we’re continuing to have those conversations.

Devorah: Like, at what point would we say “you must also have a job on top of the podcast,” which is hard to imagine now because Dan’s putting in so many hours into the show. We’ve definitely made a plan, and we started making this plan in 2016 when my book Screenwise came out. Dan had these stories to tell, so we thought “this is the time, just go for it.”

Dan: Without the cost of health care, our lives would be completely different.

Devorah: Dan would run out of material!

Dan: I would be delighted, honestly. This project is very satisfying, but I would greatly prefer if it were not necessary at all.

Devorah: That would be a great problem!

Dan: I would have to do something else, but the choices of what that something else would be open up tremendously — because you don’t have to filter every potential project or opportunity through the lens of, how does that deal with the looming monster of health care? Most people are one medical incident away from financial catastrophe. That is increasingly difficult to protect yourself from. The best calculations you can do are ballpark calculations, because you can’t know for sure if, next year, you’re going to tear your ACL playing soccer. You can’t project that.

Dan: That can be super expensive.

Devorah: It’s one thing to deny yourself medical care if you’re on the fence and you’re worried about money, but it’s another thing when your kid is crying in your arms. No parent wants to deny their children health care — and of course people do, because we live in a messed-up country and it’s messed up — but the fact is that sometimes I’ll take a wait-and-see attitude with myself that I wouldn’t take with my son. We both are more proactive with his health.

This is also the one place where we don’t save by only having one kid. We certainly save on rent by only having one kid, but this plan would cost us the same if we had five kids. There is an economy in the individual bills, five kids could run up more ER visits, but in terms of the premium there’s no economy there, which is interesting.

And here’s one more thing: Dan is seven years older than me, so one of the things that was always looming for me as Dan was bringing in the benefits and I was happily running my own business was, “When Dan is eligible for Medicare, does that mean he’ll have to keep working for seven more years, until he’s in his seventies, or do I have to go work at Starbucks to get benefits, in addition to running a successful business, when I’m 58?” The whole system is messed up, and the seven-year age difference made the whole marital he’s-bringing-in-the-benefits thing not look that good.

I did love it when when Dan was bringing in the benefits, because my income felt like a top level. Now, my income feels like, no matter how much I raise my rates, the health insurance can also raise their rates and I’ll just be screwed.

If you have a compelling story about how money comes into play in one of your relationships — whether with a partner, a friend, a sibling, a coworker, or what have you — we want to hear about it! Email [email protected] and [email protected] with a little about yourself.

5 winners and 2 losers from the RNC’s first night
Justin Amash’s first steps toward a third-party 2020 bid, explained
No helmets, no problem: how the Dutch created a casual biking culture
FDA: we might have to ban some e-cigarettes to stop teens from vaping
Twitter purged thousands of QAnon-spreading accounts, including some of the conspiracy’s most promin...
Asian Americans make up a big part of the Nevada electorate — enough to sway the caucuses