Montana Gov. Steve Bullock has dropped out of the 2020 race, and says he won’t run for Senate 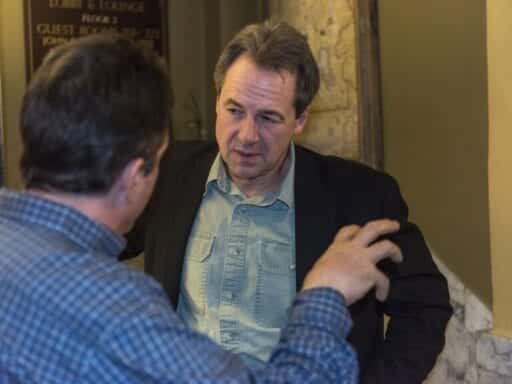 Share
Loading...
Montana Gov. Steve Bullock talks with constituents while campaigning for a fellow Democrat in Montana in 2018. | William Campbell-Corbis via Getty Images

Bullock’s long-shot campaign for president has come to an end.

Montana Gov. Steve Bullock has suspended his long-shot bid to become the 2020 Democratic nominee for president.

Since announcing in May, Bullock had struggled to break through nationally. He didn’t qualify for most of the DNC debates, appearing on stage just once in July. His campaign pinned its 2020 hopes on a strong showing in the Iowa caucuses, hoping Bullock’s middle-of-the-road approach would win over voters.

But the massive 2020 field, full of higher-profile candidates, presented a tough dynamic from the beginning. University of Montana journalism professor and political analyst Lee Banville summed it up succinctly when Bullock first declared his candidacy: “I think it’s going to be a tough sell because he is another white guy running for the Democratic nomination that not a lot of people know.”

Bullock acknowledged this in a statement declaring the suspension of his campaign: “While there were many obstacles we could not have anticipated when entering this race, it has become clear that in this moment, I won’t be able to break through to the top tier of this still-crowded field of candidates.”

Of course, Montana voters know who Bullock is. And as a Democrat who is the most popular statewide official in a state Donald Trump won by 20 points, Bullock has a real shot at making Montana’s US Senate seat competitive.

National Democrats have long hoped term-limited Bullock would leave the presidential campaign trail to run against Republican incumbent Sen. Steve Daines. Bullock has said he has no interest in running for Senate, and following the suspension of his campaign, an aide told the New York Times that has not changed, despite the fact his Senate candidacy could make Democrats’ slim chances of retaking the Senate more likely.

The ingredients are there for a Senate race, but Bullock has said he doesn’t want the job

National Democrats would dearly love Bullock to run for Senate now that he’s set aside his presidential ambitions, but the governor has so far shown no desire to do so.

“I’ve expressed all along [that] I just don’t have an interest in running for US Senate,” Bullock told the Montana Free Press in March. “I think that my skill set, and what I’ve done, I just wouldn’t enjoy it, so I’d ruled it out.”

Monday, his spokesperson Galia Slayen said Bullock has not altered his thinking on this point: “While he plans to work hard to elect Democrats in the state and across the country in 2020, it will be in his capacity as a governor and a senior voice in the Democratic Party — not as a candidate for US Senate.”

The perception that the Senate is stuck under the direction of Majority Leader Mitch McConnell and not passing any legislation other than appropriations has discouraged numerous Democrats from mounting a Senate campaign in 2020. Bullock, like other Democrats who have turned down Senate campaigns, seems to object to leaving the position of state executive to become one cog in a machine that is frequently spinning its wheels.

Steve Daines, the Republican incumbent, is up for reelection in 2020. A one-term senator, he has a decent 49 percent approval rating, per Morning Consult. He’ll certainly be a tough candidate to beat in conservative Montana, and Bullock is Democrats’ best shot to do so.

“He governed successfully and governed well,” said David Parker, a political science professor at Montana State University. “Unlike any other [2020 presidential] Democratic candidate, he’s done so in a fairly red state.”

Before and during his presidential campaign, Bullock often talked about working with Montana’s Republican-controlled state legislature to accomplish things the deadlocked US Congress could only dream of: passing an infrastructure plan, Medicaid expansion, and a campaign finance reform bill.

Trump’s approval rating may not be enough to drag down a Republican incumbent in Montana, but Bullock’s centrist image and high approval ratings made him the most sought-after candidate for the Senate seat.

There are few other available Democrats — Kathleen Williams, who challenged Republican Rep. Greg Gianforte in 2018 and lost, is running for the same House seat again. Democrats are also putting a lot of firepower into hanging on to the governor’s seat now that Gianforte is running for the spot. Helena Mayor Wilmot Collins, the state’s first black mayor, has also announced his Senate candidacy, but he’s a relative unknown compared to Bullock.

Bullock’s presidential campaign is done, but the hopes his party has about his future means political speculation about what he’ll do next may not yet be over, despite the fact he has made it clear he does not want to enter the Senate.