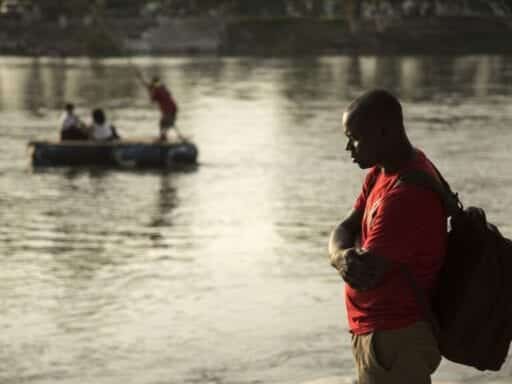 Share
Loading...
A migrant from Cameroon waits on the banks of the Suchiate River to be returned to Guatemala on July 4, 2019 in Ciudad Hidalgo, Mexico. | Cristopher Rogel Blanquet/Getty Images

Amid stricter EU immigration policies, they’re seeking protection in the US instead.

The number of African migrants traveling through Mexico to seek protection in the US is on the rise, showing that the Central American corridor to the border isn’t just traveled by those who are native to the region.

Mexican immigration officials encountered 5,800 Africans from October 2018 to September 2019, up from 2,700 the previous year, according to new data first reported by the Los Angeles Times. Many of them are coming from Congo, Sierra Leone, and Cameroon, where armed conflict has displaced over half a million migrants.

African migrants represent a small fraction of the hundreds of thousands of migrants arriving at the US southern border. The Trump administration’s immigration enforcement policies have targeted the more than 900,000 migrants from the “Northern Triangle” countries of El Salvador, Honduras, and Guatemala who were apprehended or turned away at the border over the last year.

The rise in African migrants arriving at the US-Mexico border might in part be attributed to the tightening of European Union immigration policy. In June 2018, the EU implemented a new disembarkation policy, under which Libya became the processing hub for African refugees and asylum seekers‚ including those from Congo, Sierra Leone, and Cameroon, who had been apprehended while attempting to cross the Mediterranean.

The EU has backed the Libyan Coast Guard in transporting the migrants to detention centers in Libya, where ongoing civil war has left them with no assurance of safety. The advocacy group Human Rights Watch has reported that, at four detention centers throughout the country, they observed inhumane conditions including “severe overcrowding, unsanitary conditions, poor quality food and water that has led to malnutrition, lack of adequate healthcare, and disturbing accounts of violence by guards, including beatings, whippings, and use of electric shocks.”

The United Nations migration agencies have consequently called for their evacuation to other countries.

To avoid being sent to Libya, African migrants have been choosing other routes to safety — including traveling through Central America to the US. But that journey involves other challenges.

Many have to travel through the Darien Gap: dense, dangerous rainforest between Colombia and Panama. Once they reach the Mexican border, it’s difficult for Africans to find work in Mexico, where job opportunities are slim and they face discrimination.

The Mexican government also has been denying travel visas to Africans that would allow them to move throughout the country freely, forcing many to camp out in Tapachula, a city in the southernmost region of the country.

It’s not clear how many African migrants are actually reaching the US border. It seems the US is turning away only a small fraction of those who come into contact with Mexican immigration authorities: In 2018, the US found that only 225 Africans were deportable, according to CBP.

The Trump administration has also created a series of impediments for migrants seeking asylum in the US that could dash Africans’ hopes of reaching safety.

Under the administration’s “Remain in Mexico” policy, officially known as the Migrant Protection Protocols, the administration has sent over 54,000 migrants back to Mexico while they await a decision on their US asylum applications. Both migrants who wait in line at ports of entry and those who try to cross the border outside ports of entry without authorization can be subject to the policy if an asylum officer finds their claims credible.

The administration also issued a sweeping rule in July that prevents migrants from being granted asylum if they passed through any country other than their own before arriving in the US — meaning asylum seekers showing up at the southern border who are from any country but Mexico are effectively ineligible for asylum (although some migrants would still be eligible for other protections that would allow them to stay in the US).