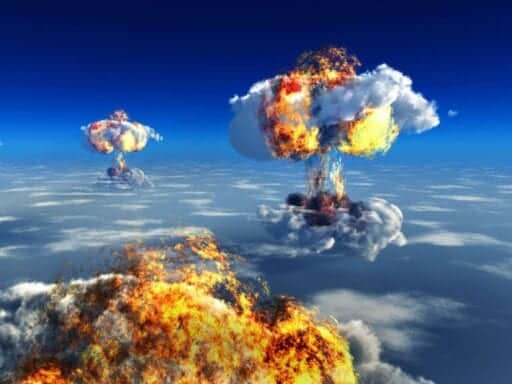 Share
Loading...
An imagined rendering of a nuclear attack during World War III. Most millennials surveyed by the International Committee of the Red Cross believe they might see this future. | Education Images/Universal Images Group via Getty Images

The International Committee of the Red Cross released an astounding report.

A majority of millennials around the world believe it’s more likely than not that a nuclear attack will happen sometime in the next 10 years — a sign that younger adults’ views on global affairs is exceedingly bleak.

Half of those nations are experiencing conflict right now, while the other half are fortunately in peace. Based on the results released last week, this demographic is worried about what the future holds.

“More than half of millennials — 54 percent — believe it is likely that a nuclear attack will occur in the next decade,” reads the report.

Those questioned in Malaysia are the most likely to fear a nuclear device going off soon, while Syrians are the least likely to worry about that. However, respondents said that nuclear weapons were the least concerning of the 12 different issues they were asked to rank, with corruption topping the list followed by unemployment and increasing poverty.

Still, the fear of a nuclear attack seems to be a trend. A January 2018 World Economic Forum survey of 1,000 leaders from government, business, and other industries, for example, identified nuclear war as a top threat.

The worldwide shudder is understandable. The chance of a nuclear conflict between the US and North Korea isn’t entirely gone. India and Pakistan, two nuclear-armed enemies, could rekindle their decades-long squabble at any time. And the US and Russia — the world’s foremost nuclear powers — have had warheads pointed at each other since the earliest days of the Cold War.

But nuclear catastrophe isn’t the only thing bothering millennials these days. About 47 percent of respondents said they believed they would see World War III in their lifetimes, while 46 percent said they wouldn’t. It’s a relatively even split, but the fact that just under half of the world’s surveyed adults believe they will witness perhaps the globe’s worst-ever conflict is dark.

The responses led the organization’s president, Peter Maurer, to lament how millennials see the world. “Fatalistic, hopeful, worried and uncertain,” he wrote about the results in the report’s foreword. “Things are not likely to get easier for millennials: they are living in a world in which wars are becoming more and more complex.”

But as Maurer also notes, “Millennials are the politicians, decision-makers, strategists, and opinion-makers of tomorrow.” It’s possible their fears about what could happen might lead them to avoid the worst. In that sense, then, there is hope.

Interestingly, the study also found that “the clear majority of millennials think that wars and armed conflict are avoidable, with those from war-affected countries/territories more hopeful than those in conflict-free countries.” That’s quite a sign that maybe those who have seen horror know or believe that situations can only get better from rock bottom.

And yet, for the younger generation to feel so morbid about the world’s future perhaps says less about them and more about the current generations in charge.

Mick Mulvaney says Trump is actually prepared to let the government shut down again
Why Sanders didn’t replicate Trump’s upset primary victory
Those who leave home, and those who stay
Elizabeth Warren spoke the most at the Democratic debate — a sign of her status as a frontrunner
The bare minimum America could do to expand health coverage
Vox Sentences: The pope wants whistleblowers on sex abuse