National Guard troops from DC, Maryland, and Virginia deployed after Trump supporters take over the Capitol 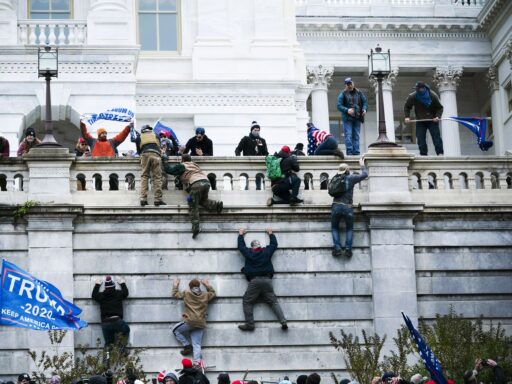 Here’s why it took longer than expected to deploy the District of Columbia National Guard to the US Capitol.

National Guard troops from the District of Columbia, Virginia, and Maryland have been deployed to Washington, DC, to help control a violent crowd of Trump supporters who stormed Capitol Hill on Wednesday.

The entire DC National Guard — 1,100 troops — has been activated, as well as 500 Maryland troops and an unspecified number of Virginia guardsmen. However, it’s unclear exactly how long it will take before the troops arrive to help US Capitol Police (USCP) clear the building. In the meantime, the US Capitol has been secured, CNN reported.

Chaos erupted on Capitol Hill as Congress began the process of certifying the Electoral College vote for President-elect Joe Biden. Scores of angry Trump supporters broke into the Capitol complex, seemingly overwhelming the USCP, whose everyday function is to protect lawmakers and staff. At one point, a security detail on the House floor drew firearms against Trump supporters trying to breach the chamber from the other side of the door, according to multiple reporters on the scene.

Senators were sheltering in a secure location, along with the Electoral College ballots, Sen. Tammy Duckworth (D-IL) told reporters on a press call Some senators, including Duckworth, said they still want to certify the results of the election by the end of the day — but they will have to wait until police deem the building safe.

“The electoral college ballots are here with us,” Duckworth told reporters. “We want to resume the process.”

Deployment of DC guard troops initially appeared to be delayed

At approximately 3:30 pm ET, Virginia Gov. Ralph Northam announced he was sending members of the Virginia National Guard at the request of DC Mayor Muriel Bowser. And by 3:50 pm, chief Pentagon spokesperson Jonathan Hoffman said the DC National Guard had been mobilized as well.

“We have fully activated the DC National Guard to assist federal and local law enforcement as they work to peacefully address the situation,” Acting Secretary of Defense Christopher Miller said in a statement, adding he’d been in touch with Capitol Hill leadership. “We are prepared to provide additional support as necessary and appropriate as requested by local authorities.”

There were conflicting reports earlier in the day about why the DC Guard wasn’t activated sooner, and was only sent in after Virginia’s had already been deployed. Because DC is not a state, the President of the United States technically has purview over the activation of the DC National Guard.

“Every governor in America has control of its guard and the District is different in that we make a request to the Secretary of the Army,” Bowser told reporters Wednesday afternoon.

Hoffman, the Chief Pentagon spokesman, said that Bowser requested and had approved by the DOD approximately 340 DC National Guard troops earlier this week to help DC police prepare for possible protests breaking out at the Trump rally. He added Bowser requested the full activation of troops on Wednesday to deal with the situation unfolding at the Capitol, and that was also approved.

“There have been no other requests from the DC government,” Hoffman added.

But the DC City Council released a statement saying the US Department of Defense initially denied Bowser’s request for troops to be sent to the Capitol. “We were appalled that this fundamental request was denied,” the DC council statement said.

According to Politico, the reason the Pentagon initially denied Bowser’s request was that “the original agreement stipulated that Guardsmen would not be in contact with civilians in order to avoid politicizing the military.”

Trump has been eager to deploy the DC National Guard in the past, as when guard troops were sent to clear peaceful from Lafayette Square this summer. The lack of troops being sent to guard the nation’s lawmakers as the Capitol complex was breached by a mob provided a stark contrast.

DC troops — as well as troops from other states — have now been deployed.