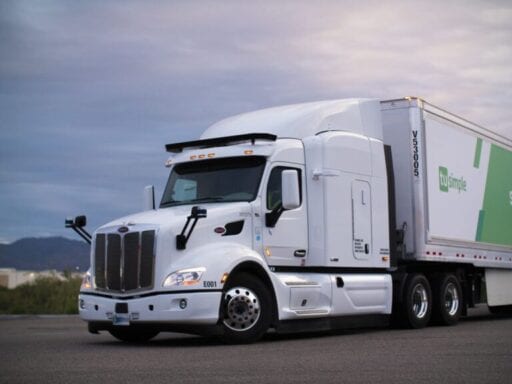 The self-driving truck company TuSimple is laying the groundwork for a futuristic autonomous freight industry.

Fully autonomous trucking may be one step closer to reality. On Wednesday, the San Diego-based self-driving startup TuSimple announced what it’s calling the world’s first autonomous freight network. That means that the company is laying the groundwork for delivering a lot more of our stuff with self-driving trucks.

TuSimple is hardly the only company working to making fully automated shipping a reality. Several companies, including Aurora, Daimler, and Embark Trucks, are competing for a slice of the future of self-driving freight trucks. Alphabet-owned Waymo confirmed on Tuesday that it will expanding its own self-driving trucking routes throughout the American Southwest and Texas, following previous tests in Arizona, California, Michigan, and Georgia.

TuSimple’s expansion plans seem more concrete than some of its competitors. The company is expanding existing shipments with UPS, which has also invested in TuSimple, and the foodservice delivery giant McLane. The major shipping company US Xpress, one of the nation’s largest freight companies, will also start shipping goods through TuSimple, which now has 22 contracted customers. Those companies will ultimately have influence over which routes are digitally mapped out for self-driving trucks next.

“Imagine if you could influence, back in the day, where a railroad track was being built, and you could build that railroad track right to your front door,” TuSimple president Cheng Lu told Recode. “As a shipper, wouldn’t that give you a big advantage?”

TuSimple plans to expand its routes in the next four years, starting with the addition of new delivery service throughout the Texas triangle of Dallas, Houston, and San Antonio in 2020 and 2021. (The company plans to keep drivers behind the self-driving wheel just in case something goes awry.) By 2023, the company wants its self-driving trucks on routes between Los Angeles and Jacksonville, Florida, and hopes to be shipping nationwide by 2024.

Currently, TuSimple has just 40 autonomous trucks in use — though it’s adding 10 more later this year — and its longest route is the 1,000 mile-drive between Phoenix and Dallas. TuSimple’s trucks are (eventually) meant to operate without humans; they will be trained on mapped routes, but the goal is to autonomously navigate traffic— and other surprises — on the roads. The challenge is building a trustworthy, AI-powered “virtual driver” that can effectively process information from a wide array of sensors, like lots and lots of high-quality cameras, but also lidar and radar. TuSimple, which was valued at around $1 billion last year, is mainly focused on long-haul trucking and hasn’t spent as much time on self-driving cars.

That’s a big difference from Waymo, which has focused on last-mile delivery and has already used its smaller self-driving minivans to move packages for UPS and AutoNation. In a call with reporters on Tuesday, Waymo’s commercial lead for trucking, Charlie Jatt, shared how the company plans to move forward with trucking. The strategy centers on demonstrating and testing a platform for self-driving trucks until the technology can be implemented into vehicles and parts produced by other manufacturers.

“We see ourselves as a technology company, not a trucking or fleet management company,” Jatt said, according to a transcript of the call. “We’re developing the Waymo Driver and then will partner with OEMs to ensure that our technology can be successfully integrated on classic trucks that are being manufactured and sold to the market in the future.”

Waymo said it is manufacturing some of its own self-driving trucks in Detroit — these are the giant, Class 8 shipping trucks you often see on highways — but the company wouldn’t detail how large the fleet would be. Before the autonomous trucks hit the highway, Waymo sends out smaller vehicles, generally minivans, to collect data and map out routes. Thus far, Waymo says those trucks have previously helped delivered freight for Google’s logistics division in Atlanta, but ultimately, Waymo says it wants to focus on building software and mapping technology.

While TuSimple, Waymo, and others are making progress, it will be years before the majority of America’s long-haul shipping is carried out by autonomous trucks. Engineers and regulators are still studying how self-driving trucks — and self-driving cars — actually work on the road. But the hope is that the technology will make trucking cheaper, safer, faster, and more fuel-efficient.

Still, these companies’ moves reflect that they’re not looking to destroy trucking as we know it, but instead want to strategically insert their autonomous technology into the manufacturing, shipping, and infrastructure that exists today. That’s probably good for trucking overall. Where it leaves truckers themselves is still unclear.

Trucking jobs will change amid automation, but it’s yet not clear how

One of the biggest fears about self-driving trucks is that the industry will ultimately displace the nearly 2 million people working as heavy and tractor-trailer truck drivers. For now, it’s not obvious how many of them will be affected in the near future. Researchers from the Bureau of Labor Statistics estimate that there are just under half a million long-haul drivers whose positions are the most vulnerable to autonomous technology, and point out that humans will still be needed for other, trucking-related tasks, like customer service and loading. Self-driving trucks that are already on the road also still need backup drivers.

Meanwhile, companies like TuSimple say they’re addressing a shortage of and high turnover among long-haul drivers, pointing to research from the American Trucking Associations. There’s also concern over the dangers of truck driving, with risk factors that include long hours behind the wheel, unforgiving weather, and driving under the influence. TuSimple addresses this anxiety in its marketing.

But Lu, TuSimple’s president, argues that even if the technology does displace drivers, they’ll be able to find other jobs that focus more on first- and last-mile hauls, rather than the longer trips and other types of jobs that are less exhausting.

“It’s not like if you’re a long haul driver, you can only be a long-haul driver,” Le said.

TuSimple worked with Pima Community College in Arizona to launch an online autonomous vehicles specialist certification program that’s meant to help truck drivers adapt to the new technology. Brenna Bayles, a Kansas-based driver who owns her own truck and is studying in the Pima program, said that she doesn’t fear automation, despite concerns that AI could take away jobs in the industry. In fact, she wants to own a fleet of self-driving vehicles herself one day.

“The buggy-whip manufacturers didn’t want to see cars come along,” Bayles told Recode, arguing that self-driving cars will ultimately be safer and cheaper to insure. “They either get with the program and work in that field, in the capacities that they can, or they find another field, but we don’t stop progress.”

Representatives of other truckers seem less optimistic. According to Norita Taylor, a spokesperson for the Owner-Operator Independent Drivers Association, beyond automation potentially threatening jobs, there are still many unanswered questions as to how self-driving trucks will navigate on-the-road situations typically handled by humans, like emergencies, problems with cargo, and dealing with law enforcement on the road.

“We have a lot of concern that federal regulators are going to put on blinders and push for more technology as the answer to the industry’s problems without considering the negative impacts of those technologies,” she said.

Kara Deniz, press secretary for the Teamsters, expressed concern that self-driving technology could be used to extend the hours expected of human drivers behind the wheel and limit the rest and breaks that they’re entitled to. The union remains worried about the impact this technology could have on jobs, among concerns of safety and lack of transparency.

“None of these [companies’] speculations take into account the reality of driving,” Deniz said in an email, “or reflect the understanding of the industry from the perspective of someone who actually does the job day in and out.”

But the reality of those jobs certainly could change, especially as companies that employ truck drivers start to look more closely at self-driving technology. While it’s not clear how fast they will get there or what the rules of the road may be, Wednesday’s news is just another sign that the technology is on its way.

The QAnon supporters winning congressional primaries, explained
How do you know what you see is “real”?
Meet the Romney-Gary Johnson-Bloomberg voter who’s embracing Black Lives Matter
Facebook is the latest major tech company to let people work from home forever
Coronavirus will also cause a loneliness epidemic
Amy Coney Barrett, Trump’s Supreme Court nominee, has a years-long record of ruling against immigran...

10 facts about school reopenings in the Covid-19 pandemic

There are proven ways to keep protests peaceful. Trump is doing the opposite.