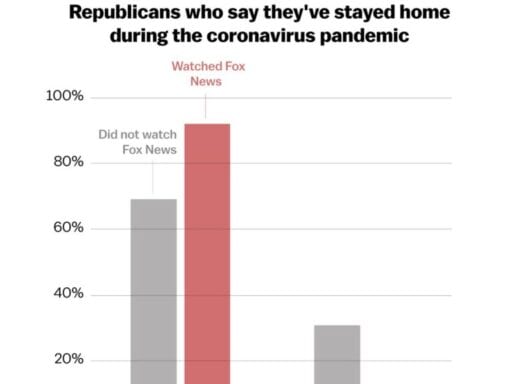 Republicans who watch Fox are less likely to stay at home during the crisis than non-Fox-watching Republicans.

It’s increasingly clear that the coronavirus is becoming a partisan issue.

President Trump, against the advice of public health experts, is pushing to end social distancing measures by Easter. Democratic officials and governors, meanwhile, are insisting that these measures stay in place to prevent catastrophe.

Fox News has been one of the president’s best allies during the pandemic messaging war, with most of its hosts spending the pandemic downplaying its severity and echoing Trump’s positions. “We are scaring people unnecessarily,” host Sean Hannity said in one early March monologue. “I see it again as ‘let’s bludgeon Trump again with this new hoax.’”

How much does Fox’s drumbeat of coronavirus misinformation matter for its largely Republican, largely older audience? A new national poll from Survey 160 and Gradient Metrics sheds some disturbing light on this question — showing that Fox viewers are much less likely to take the pandemic seriously even as compared to other Republicans.

The survey, fielded between March 13 and 16, asked a representative sample of registered voters two questions about their approach to the pandemic: whether they, personally, were staying home from work, and whether they thought the media was overstating the threat from the pandemic.

The following charts show the results for Republicans, divided up by those who reported watching any Fox News programming in the past 24 hours and those who did not. The gaps are striking:

Survey 160 also conducted the same poll among Republicans who lived in Washington state, an area hit by the coronavirus earlier than most of the country, and found roughly similar responses. This suggests that the coronavirus’s uneven geographic spread isn’t the reason for the divide.

It’s important to note that these results don’t prove that watching Fox News is directly causing its viewers to be more skeptical. It could be that the Republicans who choose to watch Fox News are more hardline partisans, and thus more likely to believe the line that’s politically convenient for Trump. Or there could be factors other than geography at play that the survey didn’t account for.

But it also could be that Fox hosts are persuading their viewers of some very unsafe things; we just don’t know either way.

The poll was also conducted during a period (March 13 to 16) when Trump had just declared a national emergency over the coronavirus, and in general was projecting far more concern about the epidemic than he is currently, and when Fox quickly pivoted to embracing the president’s line.

On Hannity’s March 13 show, for example, the host shifted from bashing dire warnings about the virus as Democratic hoaxes to praising the administration’s strong response to the crisis.

“Tonight, we are witnessing what will be a massive paradigm shift in the future of disease control and prevention,” he said. “The federal government, state governments, private businesses, top hospitals all coming together, under the president’s leadership, to stem the tide of the coronavirus.”

This means that if Fox News really is causing its viewers to be skeptical of the pandemic — and we have good social scientific research suggesting Fox does influence its viewers’ political behavior — then this could well be an underestimate of how many Republicans are still willing to go to work and ignore other social distancing measures.

Given that Fox’s audience skews disproportionately older, that should make the network’s executives think twice about the lives endangered by their hosts’ stubborn willingness to say what the president needs them to.

“Fox News is reaching a uniquely vulnerable audience, both because of their age and because of that audience’s attitudes [toward] the coronavirus outbreak,” Kevin Collins, the chief research officer of Survey 160, said in a press release. “With that power comes a responsibility to ensure the public health message of social distancing and self-quarantining is heard clearly.”

Liz Cheney asks Fox News viewers to reject Trump, after being censured by her state party
Purdue Pharma admits to crimes for its OxyContin marketing. But no one is going to prison.
America’s out-of-control Covid-19 surge, explained in 600 words
Sorry to Bother You is a bananas satirical comedy about code-switching and exploitative capitalism
Trump’s cracking down on flavored vapes — but leaving flavored cigarettes on the market
“A semi-truce”: Trump makes an EU deal to avoid a trade war