New York City secures its own supply of 100,000 coronavirus tests per week 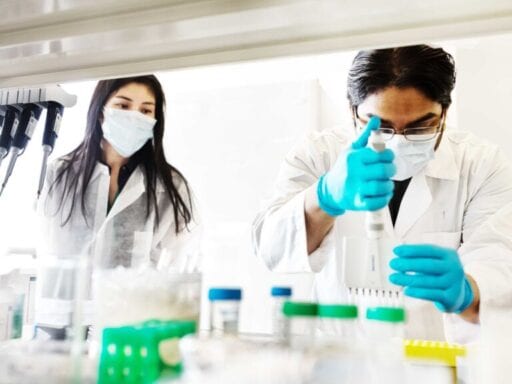 Experts say it likely won’t be enough to ease the city’s stay-at-home order.

With more than 100,000 confirmed cases, New York City has become the epicenter of the coronavirus pandemic in the US, but testing in the city — as is the case throughout the country — has lagged due to a shortage in test kits. Now it appears the city is taking matters into its own hands, with plans to make tests itself.

Mayor Bill de Blasio announced Tuesday that beginning in May, the city will have its own supply of 100,000 test kits a week: 50,000 of these will be manufactured by companies in the city, and another another 50,000 will be purchased from Aria Diagnostics, a company based in Carmel, Indiana.

“I’m sure New Yorkers wouldn’t have thought the cavalry would come from Carmel, Indiana, but it has,” de Blasio said.

Kit shortages have meant that testing for Covid-19, the disease caused by the novel coronavirus, has lagged. The city performed 10,241 tests on April 6, according to Politico, but as supplies have dwindled, so has the city’s capacity. Only 25 total tests were conducted four days later.

The mayor said the city searched everywhere for more kits after finding little support from the federal government, before eventually deciding to produce them in the city. “There’s nothing like it in New York City being made right now. Nothing even close,” de Blasio said. “If people can make them around the world, why not us?”

Mass testing will be even more critical as the city considers relaxing its social distancing guidelines, and an uptick in available tests should allow officials to better understand where local outbreaks are occurring. But it is not clear whether 400,000 additional tests per month will be enough to allow a city of 8.6 million people to reopen businesses and schools.

Experts differ on the number of tests needed to safely ease social distancing guidelines, as explained by Vox’s Umair Irfan:

One of the lower-end benchmarks estimates the US will need 750,000 tests per week. The high-end proposal, from Nobel laureate economist Paul Romer, starts at 22 million tests per day and goes up. And not just one test per person, but repeated testing over time.

Now, those numbers are estimates, meaning New York’s testing program could allow it to become even more of a microcosm for the rest of the country’s coronavirus crisis than it already is. So far, the US has only managed to build out to conducting about 100,000 tests each day. Experts agree that more tests are needed before the US can safely reopen, but as Irfan notes, they aren’t sure exactly how much more. Data from New York’s testing, particularly if it begins easing some restrictions in May, could give public health officials on the national level some valuable information on which of those estimates is best to model policy after.

And that kind of information is in high demand. While everyday Americans aren’t so sure reopening the country is a good idea, it’s become a priority for President Donald Trump and many members of his administration, some of whom are reportedly pushing for social distancing guidelines to be eased as soon as May 1.

Why wildfire smoke can turn the sky orange and damage your lungs
New polls show Democrats have a narrow path to a Senate majority
Why anyone could win Georgia’s runoff elections, according to the polls
Why veterans groups want Trump’s VA secretary to resign
Elizabeth Warren’s criminal justice reform plan, explained
YouTube just made sweeping positive changes to its harassment policy. So why all the backlash?