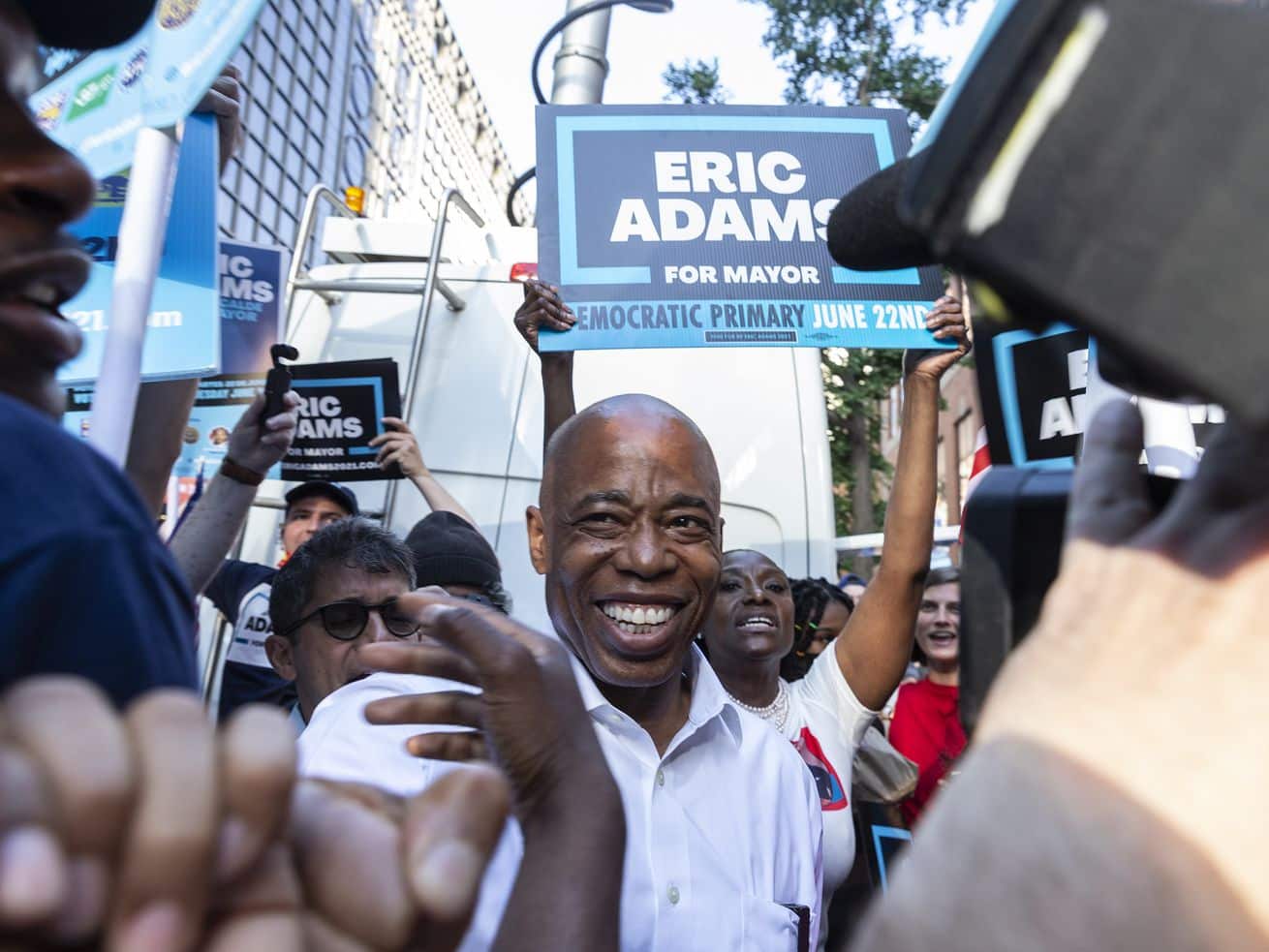 The election for New York City’s mayor has descended into chaos.

If you are just tuning into the New York City mayoral race, welcome. The stakes are high, and everything is incredibly weird.

Andrew Yang, the one-time clear frontrunner who campaigned on ideas like setting up TikTok collab houses and turning New York into a cryptocurrency hub, is mad that people haven’t noticed Eric Adams doesn’t appear to have a bathtub. There are ongoing questions about where Adams, the Brooklyn borough president and current frontrunner, even lives — and there are bigger questions about him, too: whether he’s ethical, whether his tough-on-crime mantra is right for the moment, and what is the deal with him and rats.

Kathryn Garcia, another frontrunner and former sanitation commissioner, years ago talked about how she “fell in love with garbage” and has suggested restaurants should get a heads-up before inspections. Progressives lined up behind three different candidates, ultimately landing on Maya Wiley, a lawyer and activist, after scandals swirled around the other two.

A little strangeness among long-shot candidates is one thing. But Adams, Yang, Garcia, and Wiley are the apparent leaders in the race. Plus, New York is experimenting with ranked-choice voting for the first time. And there’s a Republican primary too, which is also bizarre, but we won’t get into it: Whoever wins the Democratic primary is highly likely to win the general election in the fall.

It’s a big election. New York City was one of the places most devastated by the Covid-19 pandemic; the city faces a long, hard road back. Last summer, it was one of the epicenters of the Black Lives Matter movement, and the city saw mass calls for police reform. Now, many of the candidates are calling for more police as voters say they’re worried about crime. Adams, a former police officer, even backs stop-and-frisk, a police practice that was the subject of court battles in the city’s not-too-distant past and was found to disproportionately target young people of color.

It’s a serious moment, and lot of what’s going on is plainly not serious. It was awkward and funny when Yang and Garcia campaigned together over the weekend, and Yang told his supporters to make her their No. 2 choice (she refused to return the supposed favor).

But what happens in Tuesday’s election is going to have a real impact on the lives of millions of people, many of whom have seen their lives and livelihoods changed over the past 18 months. The circus has been fun to watch. But in the current context, it’s also tragic.

Much of the spring of 2020 was a symphony of sirens. The Covid-19 health disaster was accompanied by an economic disaster: The city lost over 600,000 jobs last year, and small businesses across the five boroughs closed forever. Many of the city’s undocumented residents didn’t get much, if any, government support. New York is facing uphill battles against homelessness, an affordable housing crisis, and a rise in violent crime.

To be clear, New York is not dead, nor is it some crime-infested hell hole. The mood feels much lighter. And it is genuinely fun to watch some of the spectacle of city politics: Love or hate Andrew Yang, he provides plenty of fodder. (Which is the best subway stop? How do we feel about people who left the city during the pandemic?)

Sometimes, elections just get a little off the rails, which is not a new phenomenon in New York City mayoral races. Back in 2013, for example, Anthony Weiner led the field for much of the Democratic primary before his campaign was finally tanked by a fresh round of sexting scandals. As to why this race has become so chaotic, there’s no one clear answer. Some of the political figures people thought might wind up winning don’t seem to have much of a chance, or they’re not even running. For much of the race, the media was focused on frontrunner Yang, with the many other candidates vying for attention. And we are coming out of more than a year of turmoil; everything about everything feels peculiar and uncertain.

But there are real issues that need addressing. Voters say in polls that they are concerned about issues like public safety, affordable housing, and the continued recovery from Covid-19 — both stopping the spread of the disease and, as more people get vaccinated, reopening businesses and getting the economy back up and running. More than 50,000 homeless people are living in municipal shelters; over 1 million kids are in a school system that still hasn’t entirely figured out how classes will work in the fall; and if and when pandemic-related eviction moratoriums end, thousands of people could lose their homes. The mayor handles tasks big and small, from overseeing a multi-billion-dollar budget to making a plan for when it snows.

The mayor handles tasks big and small, from overseeing a multi-billion-dollar budget to making a plan for when it snows

That can be hard to see in this election. Take the example of Adams, who has emerged as the figure likeliest to win the primary and, eventually, the mayor’s office.

Adams is, at the very least, a bit of an oddball. He refers to himself in third person, once did a gross show-and-tell of his efforts at pest control, and says things that are bizarre. Henry Siegel at the Daily Beast recently wrote up a truly eye-popping profile of Adams that describes him as a “former cop, Republican, and Louis Farrakhan admirer and current vegan.”

But the circus around Adams sometimes obscures the implications of his policy ideas and rhetoric. A recently resurfaced clip of him at a mayoral forum showed Adams saying remote learning could mean one teacher is necessary to teach 300 to 400 students at a time. (He has since said he misspoke.) Much of his closing pitch to voters has been to scare them about crime. It’s unclear, if he wins, whether he plans to carry a gun around with him or not. Or, if he loses, whether he won’t try to cast some doubt on the results.

At the same time, Adams has a lot of support among Black voters, some of whom live in the communities most impacted by City Hall’s decisions about crime and policing. He’s been a fixture in New York for a long time, and he’s earned trust among many, even as questions about his time in state government linger.

Conservations around the other candidates have focused on other tradeoffs. While Garcia may be more moderate than some progressives would have wanted, she is also well-versed in the levers of city government, to the point that Yang has said he wants her to work for him if he wins. Wiley might have surged late in the race, but it’s hard not to wonder whether her chances might have been better had the left lined up behind her earlier.

Yang has said he believes some of the coverage of him has been unfair, and he has a point to some extent. However, some of that’s also a consequence of his previous frontrunner status — just as the focus on Adams is now. And sometimes on the campaign trail, people just say the wrong thing.

Andrew Yang: “Yes, mentally ill people have rights, but you know who else has rights? We do!” pic.twitter.com/l6AJ4xpqWV

The primary race has seen all sorts of turns. Scott Stringer, the New York City comptroller once considered a likely progressive pick, has been hit by sexual misconduct allegations, though they haven’t cost him all of his support. Dianne Morales’s campaign has almost been self-cannibalized by her staffers’ attempts to unionize and her handling of the situation. These types of developments have been revealing. But many of the shenanigans have also just been distracting. Yang’s take on what a bodega is is far less important than whether his universal basic income plan for low-income New Yorkers would actually work or him speaking out against violence against Asian Americans.

It will likely be days, even weeks, before the outcome of the election is known. But there is probably going to be time for reflection even once the results are in.

New York has been one of the notable places progressives have gotten a foothold in recent years, not just at the city level but also at the state level, where Gov. Andrew Cuomo has finally seen his power checked. But the left has not been particularly successful in this mayoral race, taking a long time to even land on a candidate.

With city hall likely lost for the left, it appears one of the most powerful progressive figures in New York City politics is about to be Jumaane Williams, the city’s public advocate who is likely to win his race, and perhaps one of the progressives running for comptroller, such as Brad Lander. Who lands on the city council will matter, too. Anti-police rhetoric hasn’t necessarily been a disaster for the left; the race has been such a wild ride that it will be almost impossible to read that much into the results.

To a certain extent, New Yorkers are always going to hate their mayors. See: Bill de Blasio, the current mayor, whose approval rating is in the 30s. The list of complaints about de Blasio is endless — his handling of Eric Garner’s death, his management of the homelessness crisis, his gym habits. And being mayor is a hard, and often thankless, job. It hasn’t historically been a good platform to launch a national political career. See: Rudy Giuliani, Michael Bloomberg, and, again, de Blasio.

The antics coming out of this election have given everyone a reprieve, but the next mayor, whoever it is, will inherit a big job in helping the city rebuild on top of dealing with all of the preexisting quirks and challenges. Watching the candidates in this race has occasionally been fun, but the job ahead for the winner isn’t.

Fox News wants its viewers angry enough to watch but not angry enough to riot
It’s office holiday party season, but Covid-19 is making us ask what they’re even for
How Kamala Harris’s mental health plan could hurt the most vulnerable
America begins to shut down: Friday’s coronavirus news
It looks like the Buffy revival will focus on a new Slayer
Joe Biden wants you to believe in American democracy