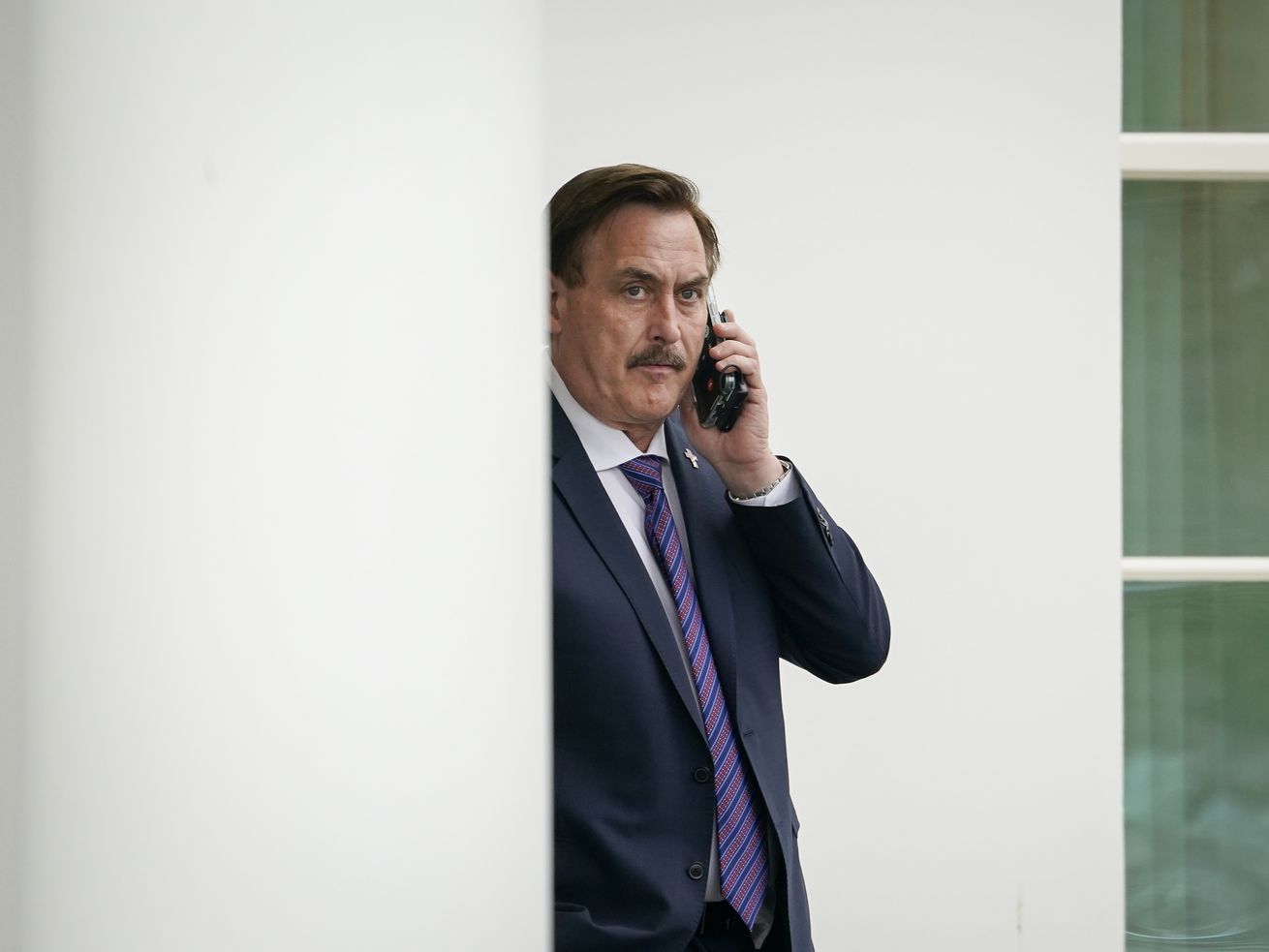 MyPillow CEO Mike Lindell joined the conservative network Newsmax on Tuesday afternoon for a train wreck of an interview that ought to go down as one of the defining video clips of this bizarre era of American politics.

Lindell, whose personal and corporate Twitter accounts were recently banned because he won’t stop spreading lies about the 2020 election being stolen from former President Donald Trump, ostensibly went on Newsmax to rail against “cancel culture.” But his appearance immediately went off the rails as he started spreading lies about election fraud tied to voting hardware made by Dominion Voting Systems.

Newsmax, whose ratings surged after the election as it carved out a niche as a source of Trump election trutherism, abruptly changed course as Dominion seeks legal action against those who falsely claim it rigged the election for President Joe Biden. Dominion’s legal effort has already prompted Newsmax to read disclaimers about the company live on the air.

“Well, first [Lindell’s Twitter account] was taken down because we have all the election fraud with these Dominion machines. We have 100 percent proof,” Lindell claimed, prompting host Bob Sellers to jump in and read a disclaimer.

“Mike, Mike, you’re talking about machines that we at Newsmax have not been able to verify any of those kinds of allegations. We just want to let people know that there’s nothing substantive that we’ve seen,” Sellers said. “And let me read you something there. ‘While there were some clear evidence of some cases of voter fraud and election irregularities, the election results in every state were certified and Newsmax accepts the results as legal and final. The courts have also supported that view.’ So we wanted to talk to you about canceling culture, if you will.”

But Lindell wasn’t having it.

“They did this [banned Lindell from Twitter] because I’m reviewing all the evidence on Friday of all the election fraud with these machines,” Lindell continued. “So I’m sorry if you think it’s not real. It’s real.”

By this point, Sellers had had enough.

“Okay. Mike. Can I ask our producers, can we get out of here, please?” he said. “I don’t want to have to keep going over this. We at Newsmax have not been able to verify any of those allegations —”

Then, in a remarkable twist, as Lindell continued to try to talk over him, Sellers physically got up and left the Newsmax set.

A clip of the debacle quickly went viral:

In the months leading up to the January 6 insurrection, Lindell did perhaps more than anyone else in Trump’s orbit to advance an evidence-free conspiracy theory that Trump’s loss to Joe Biden was the result of voting machines flipping Trump votes to Biden.

“Biden got, like, 1.2 votes for every vote, and our president got, like, .66, okay? When that happened, all of us voting — it was probably 80 million votes who came in for our great president — and because of you, guess what? They all broke the algorithms and the machines,” Lindell claimed during a December speech at a pro-Trump rally in Washington, DC. (Trump in fact received 74 million votes, and Biden received 81 million.)

This election fraud conspiracy theory just offered by Mike Lindell is one of the craziest things I’ve ever heard pic.twitter.com/IUvVAbFltD

But voting machine companies like Dominion and Smartmatic haven’t just accepted these untruths. Dominion has already filed a $1.3 billion lawsuit against Trump lawyer Rudy Giuliani for baselessly linking the company with fraud, and letters Dominion and Smartmatic sent to Fox News, Newsmax, and other right-wing media outlets warn that similar litigation is “imminent.”

Those letters have prompted remarkable segments where hosts like Lou Dobbs read statements debunking their own claims about election fraud live on the air.

This is very bizarre. Lou Dobbs ran a segment tonight basically debunking his own lies about Smartmatic voting machines pic.twitter.com/FDM91SPtT1

For whatever reason, Lindell doesn’t seem particularly worried about getting sued. But the fact that Newsmax and Fox News are not only shutting down lies about voting machines but literally diving out of the blast zone when guests start making them says something about the post-election campaign Trumpworld waged to overthrow the election — one that culminated in the January 6 insurrection and Trump’s second impeachment, for which he’ll face trial in the Senate next week.

True statements, after all, can’t be defamatory. But under legal duress, the right-wing cable news ecosystem that spent months suggesting Trump didn’t really lose is now demonstrating it doesn’t buy what it was selling.

The GOP’s silence on the whistleblower allegations is telling
A guide to Lovecraft Country’s many pop culture tropes and references
Harley-Davidson is a loser in Trump’s trade war
The case against summer camp
The top UN court ordered Myanmar to protect the Rohingya. An expert explains what it means.
Social distancing and shutdowns have been astonishingly effective at blunting the pandemic