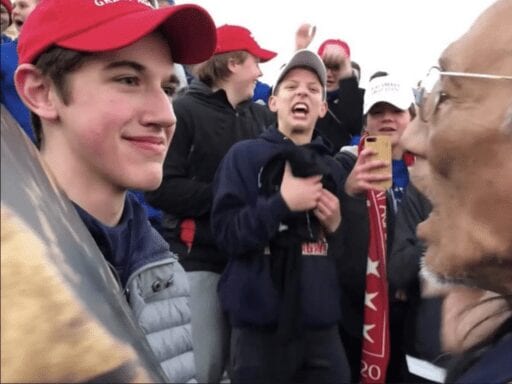 Sandmann is a figure from a year-old culture war battle. His appearance says a lot about what really drives the RNC.

Nick Sandmann, an 18-year-old graduate of Covington Catholic High School and star of an infamous viral video from January 2019, is one of the marquee speakers at Tuesday night’s Republican National Convention. His prominent role highlights the fundamental truth about the GOP in the Trump era: that it is an empty vehicle for conveying cultural grievance.

You might remember the incident from the video in question. Sandmann was one of a number of students bused in from Covington Catholic High School in Kentucky to DC to attend the anti-abortion March for Life; he was filmed, standing with his classmates and wearing a MAGA hat, directly in front of Native American elder Nathan Phillips during a confrontation on the steps of Lincoln Memorial. Initially, it looked like Sandmann had gotten in Phillips’s face in an attempt at intimidation or mockery — leading to a social media firestorm and a series of stories in the mainstream media vilifying Sandmann as the smirking face of white supremacy.

But fuller footage showed a more complex picture. Phillips had actually walked up to the Covington students, interposing himself in a confrontation begun by a third group (members of the Black Hebrew Israelites sect) who had kicked this off by hurling abuse at the Covington kids. Sandmann claimed vindication, and even sued mainstream media outlets for their initial reports. In 2020, he settled for an undisclosed amount with both CNN and the Washington Post.

In January 2019, the Covington Catholic controversy was the issue in American public discourse. But time has passed, and the very real economic and health crises of our current moment make this old video feel like a sideshow.

Yet for the Trumpian right, it remains an indelible part of their worldview: proof positive that their greatest enemies, the “woke” social justice left and the mainstream media, are in fact the villains that they make them out to be. And it’s this culture war, more than any real problems of governance or policy, that animates the GOP under Trump.

What actually happened with Nick Sandmann and the Covington Catholic video

According to Sandmann’s contemporary statement, the whole thing happened while he and his classmates were waiting at the Lincoln Memorial to board buses back to Kentucky. While waiting there, the Black Israelites hurled obscenities at the Covington kids — calling them ”dusty ass crackers” and “a bunch of incest babies,” among other foul things. Instead of walking away, the Covington boys decided to respond with a round of group cheers, and the chaperones let them.

It’s hard to tell in the videos what they’re saying, but they clearly get riled up. At one point, a student rips off his shirt as the rest cheer and jump. That’s when Phillips, the Omaha elder and a retired Marine, decides to intervene, and marches into the space between the two groups. Somehow — it’s not clear how from the footage — Phillips and his small group get fully surrounded by Covington students.

If you watch this footage, focusing especially on the way Sandmann interacted with Phillips, you can see why it instantly captured national attention after surfacing on social media. A bunch of white kids joining in a Native group’s chants can be problematic to begin with; doing it in a heated moment, with one of the boys seemingly up in an elder’s face, creates an even more disturbing impression on first viewing. A shorter clip of the incident clip quickly went viral; early write-ups in major outlets portrayed Sandmann and his classmates as racist villains harassing Phillips.

That does seem to be partially correct: Some of the kids did do tomahawk chops in mockery of Phillips (Sandmann was not one of them). But as more video came out, and people started to see the crucial role of the Black Israelites in instigating the conflict, the simple story of “evil racist kids versus good protesters” became hard to sustain all that cleanly.

Right-leaning publications converged around the idea of the Covington students as victims of a liberal hit job, a collection of innocents reacting relatively calmly to vicious harassment. For conservatives, it was a vindication of what they had long argued: that liberal anti-racism had transformed into a militant, intolerant ideology. From their point of view, the liberal reaction to the video, and not the footage itself, was the biggest problem. It reveals a culture where white men are acceptable targets of hate who deserve no sympathy and no due process, and where the left-wing mob wields tremendous power through its command of the public sphere.

But it wasn’t just prominent liberals on Twitter who became the subjects of right-wing ire. The mainstream media’s earliest coverage often echoed the liberal line on Twitter; some of it had to be seriously revised based on the more complete videos. This, too, played into a deep sense of conservative cultural grievance. As President Trump put it on Twitter at the time:

Nick Sandmann and the students of Covington have become symbols of Fake News and how evil it can be. They have captivated the attention of the world, and I know they will use it for the good – maybe even to bring people together. It started off unpleasant, but can end in a dream!

Why is Nick Sandmann at the RNC?

If all of this sounds like stale cultural grievance — well, it is. Sandmann isn’t a meaningfully important public figure anymore; he’s 18 years old and has no political accomplishments other than being in the wrong place at the wrong time and forcing settlements in two lawsuits.

But the RNC so far has been laser-focused on the evils of “cancel culture,” a term that, in this context, seems to refer generally to left-wing censoriousness and social media shaming. Even the sober speeches from the first night, like former United Nations Ambassador Nikki Haley and Sen. Tim Scott, included cancel culture references. And others, like former Fox News host Kimberly Guilfoyle, went all-in on it.

“They want to control what you see and think and believe so that they can control how you live,” Guilfoyle warned. “They want to enslave you to the weak, dependent liberal victim. They want to destroy this country and everything that we have fought for and hold dear. They want to steal your liberty, your freedom.”

In this narrative, Sandmann is the perfect victim: a young conservative man who came to Washington to protest abortion and was “smeared” by the left as being an awful racist because he had the temerity to wear one of President Trump’s hats. The fact that he’s been fighting the media, and forcing them to settle lawsuits, is icing on the cake.

In reality, though, Sandmann’s appearance is a testament to the emptiness of this narrative. There’s no policy argument connected to this story; revisiting it does nothing to convince voters that the Trump administration can make their lives better in any kind of material way. The RNC to date has been empty in this exact way, an attempt to gin up anger and fear at the base’s enemies rather than sell a positive vision of America.

Bringing Sandmann to this stage is best understood as a kind of sleight of hand. Donald Trump is president of the United States, and is currently in charge of a country that has one of the worst coronavirus outbreaks in the world. The economy is in free fall. Protests against racial justice still rage, sometimes even turning violent, and Trump has nothing to say about them but pro-police bromides and cultural demagoguery.

Don’t focus on the governance failures under our watch and the fact that we don’t have any meaningful solutions. Instead, join us in hating your enemies: the media and those horrible social justice warriors.

Remember that thing that happened in January 2019 that made you angry? Be angry again. Revel in your outrage. Breathe it in, and don’t forget to text “TRUMP” to 88022. It’s the best way to own the libs.