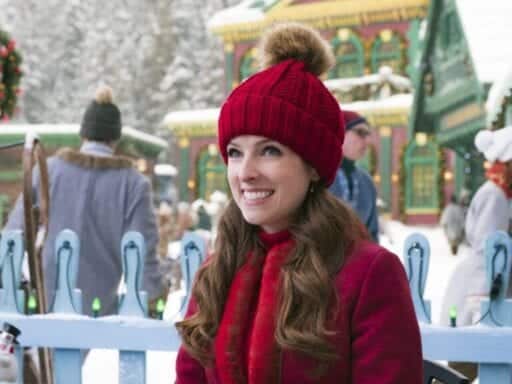 The new Christmascom isn’t good. But it is something your kids can watch while you do something else.

The premise: Santa has died, throwing the North Pole into turmoil. His son, Nick (Bill Hader), is destined to wear the red suit, but he seems uninterested in the job. When Santa’s daughter Noelle (Anna Kendrick) advises Nick to take a weekend off before he burns himself out — millennial Santa coming through! — he disappears and the gig falls instead to Noelle’s cousin, Gabriel (Billy Eichner). Noelle sets out to find Nick in the hope of saving Christmas. Can you guess which of these characters ends up as Santa????

What it’s about: Writer-director Marc Lawrence (the man behind some truly gleeful rom-com confections, particularly 2007’s Music and Lyrics) hopes to add to the movie mythology of what the North Pole is really like with this occasionally unwieldy but mostly breezy movie. At times, Noelle seems designed for parents to turn it on to placate their hyperactive, Christmas-obsessed kids in the days leading up to the holiday, and on that level it mostly delivers. It’s cute, Anna Kendrick is her winsome self, and Bill Hader uses his gloomy Gus energy to ground just enough of the proceedings, preventing the film from floating off into the sky.

Noelle is Kendrick’s movie, and it’s a fitting reminder of why she’s such a potent star in projects that require some degree of cheerful borderline sociopathy. She smiles and sings and makes you believe in some truly unfortunate and fake-looking CGI reindeer in a story that keeps mutating and gobbling up other genres. It’s a family comedy! No, it’s a workplace satire set at the North Pole! Now it’s a vaguely tech-savvy story about the surveillance state (represented by the guy who knows when you’ve been sleeping and knows when you’re awake).

Eventually, the movie settles down. For most of its running time, it’s a fish-out-of-water comedy with Noelle wandering around Phoenix looking for her brother. But it seems uniquely uninterested in this particular plotline, continuing to throw comedic bits at its cast in lieu of building a cohesive narrative. In particular, it tosses Noelle into a buddy-cop simulacrum with a private eye who takes her case. Would you believe he has a kid who wishes his divorced parents would come together for Christmas morning? Would you also believe Noelle somehow just knows that this is what the kid wants and that the kid is nice, without anybody telling her?

You can see where this is going, almost certainly. And Noelle frequently feels like it’s running in place, frantically throwing shiny objects in your face in the hope you don’t lose interest. But for fans of movie depictions of Christmas, there are worse options. The production design and costumes are sprightly and colorful, and Lawrence is terrific at keeping the story moving, even when it doesn’t seem like it has any reason to keep going.

This movie is kind of the height of Disney’s “girls can be anything, just so long as it’s capitalist!” approach to storytelling in the 2010s. But Kendrick and some cute visuals go further to convey this idea sans any sort of self-criticism than it probably deserves. Or maybe I’m just a sucker for Anna Kendrick’s enormous “grin and bear it” energy. Who can say?

Critical reception: Few critics have reviewed this movie yet, but in a negative review, the Hollywood Reporter’s John DeFore reminds us all that this is far from the first fish-out-of-water Christmascom: “As he sends his innocent heroine into our fallen world, Lawrence starts swiping shamelessly from Elf.”

How to watch it: Noelle is streaming on Disney+.

“Release the JJ cut”: the Star Wars conspiracy that lets fans warp reality
What a 1963 RFK-James Baldwin meeting teaches us about race in Trump’s America
Montana just voted to legalize marijuana
Did the watchdog report finally end the Clinton email scandal? Congress doesn't think so
A black man went to jail for missing jury duty. After public outrage, the judge cleared his record.
4 winners and 5 losers from the 2020 Golden Globes nominations