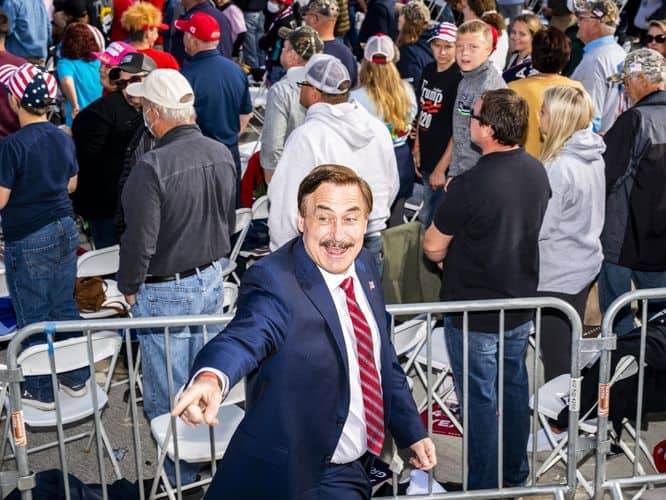 The network really does not want to get sued.

MyPillow CEO and staunch Trump loyalist Mike Lindell has a new documentary out, pushing his long-debunked lies about former President Donald Trump’s loss to President Joe Biden being the product of fraud. It debuted on OAN on Friday. But before it began, the network wanted viewers to know just one thing: The two-hour special, ironically titled “Absolute Proof,” is just one guy’s account of “what may have happened.”

“Michael James Lindell has purchased the airtime for the broadcast of this program on One America News (‘OAN’) network,” begins the 90-second disclaimer.

“In particular, OAN does not adopt or endorse any statements or opinions in this program regarding the following entities or people: US Dominion Inc. (and any related entities); Smartmatic USA Corp.; Brian Kemp; Brad Raffensperger, or Gabriel Sterling,” it adds.

The beefy disclaimer highlights how terrified OAN is of getting sued by voting machine companies like Dominion and Smartmatic who aren’t happy that Lindell and other Trumpers have used it to spread lies about voting machines rigging the election for Biden. This isn’t an idle threat: Dominion has already filed a $1.3 billion defamation lawsuit against Trump lawyer Rudy Giuliani for baselessly linking the company with fraud, and letters the companies sent to Fox News, Newsmax, and OAN warn that similar litigation is “imminent.”

Strangely, however, OAN — an upstart far-right cable network that along with Newsmax has cut into Fox News’s audience by echoing Trump’s big lies about the election — used extremely reckless language while promoting Lindell’s special on Twitter, writing falsely that “Growing evidence of election fraud reveals that the presidency of the United States has been stolen from the American people” in a tweet that has been flagged.

Growing evidence of election fraud reveals that the presidency of the United States has been stolen from the American people.
Join MyPillow CEO Mike Lindell for an exclusive report. Tune in to “Absolute Proof” this Saturday & Sunday starting at 8 AM ET / 5 AM PT. Only on #OANN. pic.twitter.com/1NWMIGUzFd

Massive lawsuits of the sort that Dominion and Smartmatic are threatening have driven media companies out of business in the recent past and could represent an existential threat for OAN, even if Lindell is now compensating them for airtime. But the terrifying thing for the public is that anyone would take the stuff Lindell says in the “documentary” seriously.

“Absolute Proof” not only contains no proof, but consists of Lindell endlessly repeating the same debunked theories he’s been pushing for months now: that not only did Trump not lose the popular vote, but so many people turned out to vote for him that “the algorithms of these machines broke,” prompting Dominion and Smartmatic to get busy rigging things for Biden.

One of many big holes in Lindell’s conspiracy theory is that recounts and audits haven’t turned up a shred of evidence of systemic fraud. Even Trump appointees said the November 3 election was “the most secure in American history.” But Lindell, of course, is far past the point of letting facts get in the way of anything.

As the documentary progresses, Lindell interviews a number of so-called “experts” — such as retired Col. Phil Waldron, who was recently in the news for working with Giuliani in Michigan to spread debunked claims about Biden’s victory — with accompaniment provided by ominous music that seems lifted straight from a spoof.

I promise you I didn’t add music to this video clip. This is the original audio. pic.twitter.com/rKBSb2jzO8

Lindell’s documentary won’t persuade anybody who hasn’t already been mainlining Trump Kool-Aid. But buying time on OAN means he can present his conspiracy theories with impunity — unlike what happened on Newsmax on Tuesday, when Lindell’s attempt to spread lies about voting machines resulted in a horrified host literally getting up and leaving the set as visions of billion-dollar lawsuits likely danced through his head.

Lindell, it should be noted, has for months been moving the goalposts about when he would finally present his smoking-gun evidence of fraud. “Absolute Proof” does prove one thing: that he’s been bluffing the whole time.