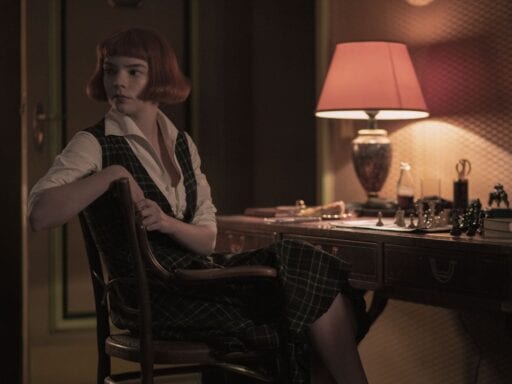 The seven-episode miniseries shows why Anya Taylor-Joy is one of the most exciting actors working today.

Chess shouldn’t be all that interesting to watch on screen, for probably obvious reasons. The game involves a lot of people sitting and staring at a board, moving pieces around in quiet contemplation. And unless you’re a major chess fan, the moves the players make won’t immediately make sense in the way a baseball player hitting a home run does.

But something that is interesting to watch onscreen is a great actor playing a compelling character who has a lot going on in their mind. A close-up on the actor’s face as the wheels turn in the character’s head can be gripping because attempting to think your way out of a problem is something we all have experienced.

So the smartest choice Scott Frank makes in adapting Walter Tevis’s 1983 novel The Queen’s Gambit into a seven-episode Netflix miniseries is to focus not on the chess but on his actors’ faces, particularly that of his star. As chess prodigy Beth Harmon, Anya Taylor-Joy gives one of my favorite performances in ages. And Frank shows an understated confidence in relying not on fancy camera tricks but on close-ups that watch the star’s slightly too-wide eyes flicker with recognition as she finds the move to trounce yet another challenger.

The central conflict of the miniseries isn’t Beth vs. a world that keeps underestimating her, as it seems to be on its face. The central conflict is the viewer vs. Beth, as you try to find your way inside her rapidly whirring brain, and almost do, before she shuts you out again.

Beth is an orphan in 1950s Kentucky, who discovers an abiding love of chess almost by accident, thanks to a gruff old janitor (Bill Camp) who works at the orphanage she is sent to after her mother dies in a car accident. (Isla Johnston plays Beth as an orphaned child before Taylor-Joy takes over the role when Beth turns 15.) But when Beth is adopted by a middle-aged couple in the early 1960s and encouraged by her adoptive mother (Marielle Heller) to pursue her chess hobby further, she rapidly starts climbing the ranks of the world’s best players.

That’s kind of it, so far as the story goes. The Queen’s Gambit is an underdog narrative —nobody expects a woman to be good at chess! — meshed with a coming-of-age character study. How much of Beth’s motivation stems from the uncertainty of her childhood, of her adoption, of her bouncing from an orphanage to public school as a teenager? And how badly do the addictions that she develops to pills and alcohol, almost as part of her training, hinder her progress?

Her traumas and her addictions must drive her on some level, but at no point does she monologue painfully and at length about how losing her mother pushed her to be better. She just has to be better because she has to be better. If she ever stopped and looked too closely at the reasons she behaves the way she does, she might completely fall apart.

Taylor-Joy is one of my favorite performers working today, and she’s exceptional here. The best chess players in the world know when they’ve won or lost dozens of moves ahead of the game’s completion. Thus, chess very much is a game of faces, and Taylor-Joy’s cerebral acting meshes perfectly with Beth’s story. She’s an actor of micro-expressions, of flickers of eyes and twitches of lips, and what makes The Queen Gambit such a good fit for her is the way she keeps both the viewer and Beth’s opponents at arm’s length.

Competition stories are often a great way to do character studies, especially when the competitions are one-on-one. Weirdly, the story I thought of most often while watching The Queen’s Gambit was Martin Scorsese’s 1980 film Raging Bull. The surface resemblance between the two is faint, but they’re both about self-destructive, preternaturally talented people who wrestle with the gendered expectations of the society they exist in, with top-notch performances from actors at the height of their craft.

I spent most of The Queen’s Gambit nervous that the miniseries was going to become a story about Beth having to learn how to be a woman or something because she has turned off so much of herself to focus on being great at chess. But Frank’s scripts focus not on something so clichéd but on Beth stubbornly hammering at her own humanity until it fits the peculiar circumstances of her existence. The series is about how the mere fact of her being a woman causes other players to underestimate her, but only on its margins. By the time she’s credibly competing for the US championship, everybody takes her seriously. The Queen’s Gambit is not a story about a woman overcoming the odds to show the world her girl power; it’s a story about a woman overcoming the odds to understand herself. (And lest I leave the impression the series is all Taylor-Joy, the entire cast of the miniseries is perfect.)

It’s also a miniseries about chess, one that slowly but surely teaches you important truths about the game, so that by the time Beth is playing the much-vaunted Soviet chess players, you get the gist of the games, even if you don’t grasp each and every nuance. You’ll understand just why it’s advantageous to play white instead of black, but you’ll also understand how the built-in disadvantage black holds reflects some of the ways Beth sees herself, even if she would never say that.

Another movie I thought of while watching The Queen’s Gambit was Mike Leigh’s terrific 2008 comedy Happy-Go-Lucky. What I love about that movie is that its central character — an extraordinarily kind and, well, happy-go-lucky woman — doesn’t undergo some awkward character arc in which she realizes the world is darker and more cynical than she expected. Instead, she forces the world to realize the viability of her point of view.

The Queen’s Gambit has flaws. It’s maybe a little too long. Frank is perhaps slightly too enamored of watching his star cavort around in her underwear. And the series’ one major character of color (Beth’s Black best friend Jolene, played wonderfully by Moses Ingram) is a thankless role. But The Queen’s Gambit also has a healthy dose of Happy-Go-Lucky-ness at its core, in a way that almost makes it a mirror image of that film. Beth Harmon forces the world to reckon first with her talent and then with her pain. The world bends around her in turn, without pressuring her to be anything she’s not. Sometimes, that’s enough.

The Queen’s Gambit is streaming on Netflix.

How the coronavirus got Joe Biden to think much bigger
Trump just gave Americans a lesson in white history
The Supreme Court will not review the case of Adnan Syed, subject of Serial podcast
I’m American, and I’m multilingual. Why does it feel so scary to speak in another language in publi...
Vox Sentences: Pardon me?
Elon Musk’s big, failed plan to bring a mini-submarine to rescue the Thai boys