One Good Thing: The pulpy joys of the Bruce Lee-inspired Warrior 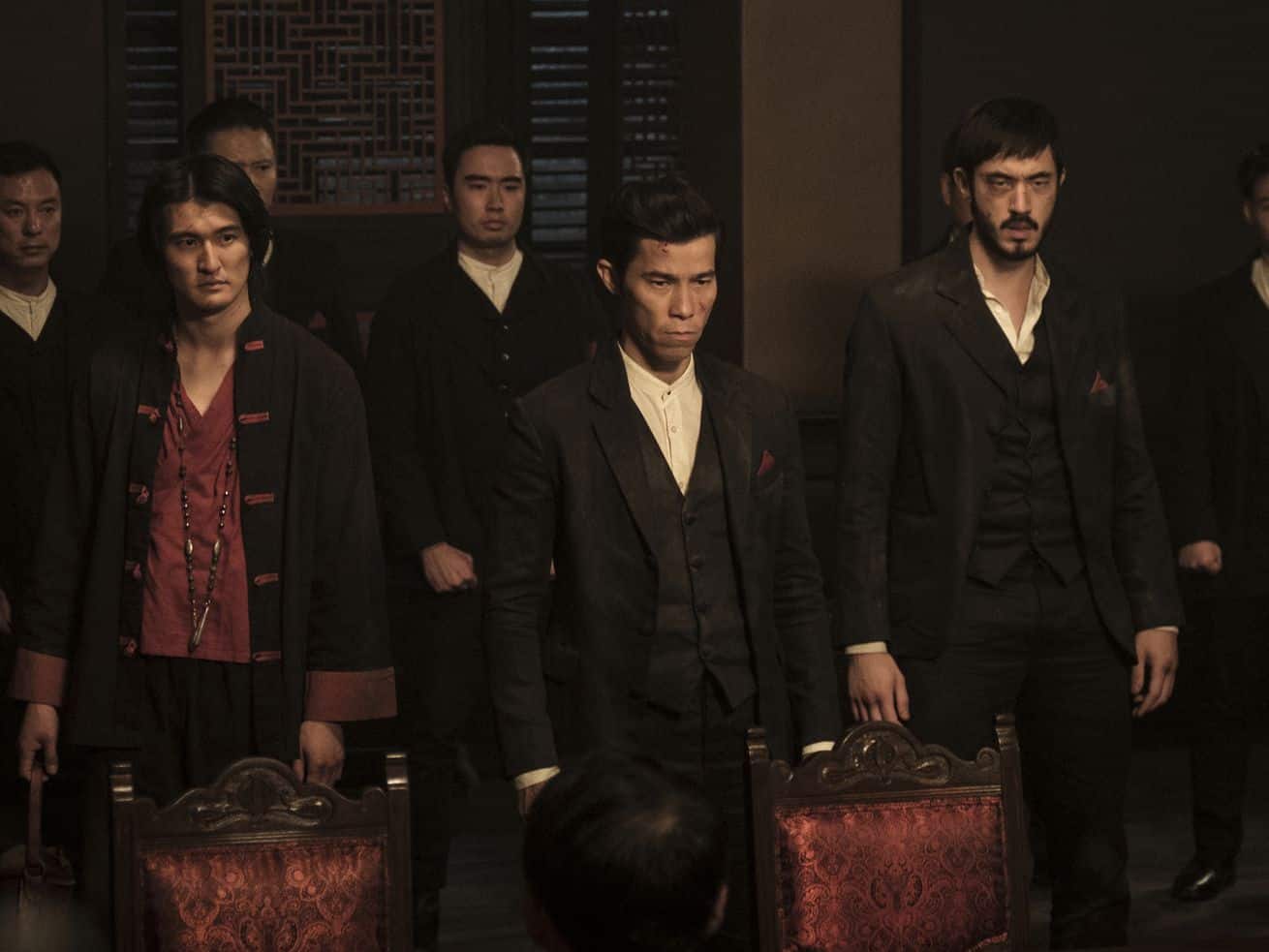 Before he died tragically in 1973 at the age of 32, Bruce Lee was writing the beginnings of a martial arts Western television series. It was a chance for the Chinese American actor, who had long played supporting characters in American films, to finally star as the hero of his own show. Lee pitched it to the studios, but according to him, producers didn’t think audiences were ready for a show with a nonwhite lead. He died before he could see his vision through.

Years later, Lee’s daughter, actress and martial artist Shannon, discovered an eight-page treatment for the show in her father’s journals after taking over the Bruce Lee Foundation, an organization dedicated to his legacy, in 2000. She picked up where her father left off, collaborating with Justin Lin, director of the Fast & Furious franchise. The resulting Warrior feels like the series Lee would have wanted: pulpy, action-filled genre television that centers Chinese American stories.

Warrior premiered on Cinemax in 2019 and aired for two 10-episode seasons, both of which are available to stream on HBO Max. There’s a lot about the show that will be recognizable to fans of today’s dark antihero dramas: The gangster storyline feels like a plot from Boardwalk Empire or Peaky Blinders, the frontier fable of capitalism resembles Deadwood, and warring factions vying for power recall similar conflicts on Game of Thrones. But what sets Warrior apart is its focus on a fascinating chapter in the American story that’s often treated like an afterthought in history books. And it wraps that history lesson in an enticing action-thriller package with nods to spaghetti Westerns, the kung fu cinema of Hong Kong, gangster flicks, and exploitation films, as well as other grindhouse genres.

Warrior takes place in 1870s San Francisco — the city where Bruce Lee was born — during a wave of Chinese migration, primarily to provide labor for America’s new railroads. Newly arrived Chinese immigrants, facing discrimination and sequestered in Chinatowns in major cities across the country, self-organized into gangs, or “tongs,” as a way to survive. The violent Tong Wars ensued as anti-Chinese sentiment swept the nation, ultimately leading to the 1882 passage of the shameful Chinese Exclusion Act, the sole piece of legislation in American history that banned the immigration of an entire nationality.

Warrior’s story follows Ah Sahm (Andrew Koji), a poor Chinese immigrant with first-class fighting skills who arrives on the shores of America in search of his sister, Mai Ling (Diane Doan). Once he arrives, he’s immediately initiated into the Hop Wei, a tong that sells opium in San Francisco’s Chinatown. Soon he discovers that Mai Ling, who had come to America years earlier, is now married to the powerful leader of an opposing tong. Their reunion ignites long-simmering tensions between the tongs, triggering a power play between the long-lost siblings over who will take over Chinatown.

The show’s universe is hard-boiled, steeped in menacing violence and the cutthroat core of American capitalism. The tongs operate on enforced loyalty under threat of death, but you can’t help but admire them for staking out a small piece of power in a country where Chinese people are villainized and shut out of society. The alternative is to work as a cheap laborer subjected to backbreaking conditions for starvation wages. Meanwhile, the city’s Irish workers, who have found their jobs undercut by the new migrants, routinely attack both the Chinese and the factories where they work.

Warrior’s characters are survivors. Ah Toy (Olivia Cheng), the bisexual madam of a Chinatown brothel, is trying to not only build a safety net for herself but also provide a better alternative to more exploitative avenues of sex work — or, in the direst circumstances, sex slavery — for Chinese women. Weapons dealer Chao (Hoon Lee) makes his way and tries to get ahead by selling hatchets and information to the highest bidder, including the police. For me, the standout character is Baby Jun, the bastard son of a tong leader and sex worker, who is played with humor and recklessness by Jason Tobin.

Warrior focuses on its Chinese American characters, who are just trying to make it in this country. But the show’s villains are compelling figures too. Dean Jagger’s Dylan Leary is particularly interesting as a union leader who mixes genuine concern for his fellow working-class Irish immigrants with the terrifying and violent rage of a racist. The show’s police, mostly Irish themselves, are depicted as unbridled enforcers of wealth and white supremacy, but a Southern cop named Officer Lee (Tom Weston-Jones) makes an admirable attempt to do actual police work. To the industrialists, the Chinese matter little beyond providing a cheap labor source, but it’s hard not to root for Penny (Joanna Vanderham), a woman whose inherited steel factory is her only route to independence from her horrific husband, the mayor.

The immigrant caste system of the show is one of its strongest storytelling features. Recently migrated Chinese are at the bottom, Irish migrant laborers and police officers the next rung up, yet all sit underneath the white Anglo-Saxon Protestant (WASP) industrialists and politicians — who are, of course, on stolen land themselves. The question of who gets to truly be American and how that question is used to exploit the working class is a core theme of Warrior that feels especially relevant to today’s politics.

And the real-world stories and figures that inspire Warrior’s storytelling — Ah Toy is based on a real gold rush-era madam, and Dylan Leary is based on the labor organizer and founder of the Workingmen’s Party, Denis Kearney — are refreshing. As a huge fan of period television, I’ve long wanted to see more people who look like me at the center of these shows. This is part of what felt so intriguing about the recent debut of Netflix’s popular Bridgerton, which transplants characters of color into a Jane Austen-style romance. But representation can feel like a shallow concession when portrayed without consequence, subbing out would-be white characters for nonwhites with little more than an obligatory nod to the realities of racial dynamics. That’s why I’ve found Warrior so satisfying to watch: Here is a little-known piece of actual Chinese American history, rooted in America’s history of immigrant exploitation, playing out on screen.

The fact that Warrior is imbued with the legacy of Bruce Lee, an icon of Asian American cinema, just adds to the show’s Asian American specificity. The influence of Justin Lin, action-movie mogul and one of the most powerful Asian American creatives in Hollywood, is most obvious in the series’ terrific fight sequences. However, I was reminded more of Lin’s underrated first film Better Luck Tomorrow, which also depicted Asian-Americans — freed from the stereotype of silent obedience — breaking bad.

But I don’t mean to make the show sound preachy or pedantic. I promise, Warrior is just really fun to watch. Its martial arts sequences are standouts, as complex as they are bloody, and the dialogue feels straight out of a dark graphic novel. Because the show originated on Cinemax, there’s a lot of sex and violence, as well as racial slurs that at times slip into “gratuitous” territory. But because Warrior feels like a deliberate tribute to grindhouse movies, it all sort of fits.

Sadly, the untimely demise of Cinemax in 2020 means that Warrior is effectively canceled. Now that it’s streaming on HBO Max, however, there is a glimmer of possibility the show will find a wider audience and maybe get picked up for another season as an HBO Max original. I hope it does. I’d love to see the universe of Warrior expand, especially to include other groups in late 1800s California; an episode that focuses on a Mexican American street-fighting host and the introduction of the show’s first Black character are signs the show, at one time or another, intended to do just that.

But regardless of whether the show is ever revived, Warrior’s two completed seasons provide a satisfying storyline. The penultimate episode of season two, a violent clash in Chinatown following the lynching of a Chinese man — based on the real-world San Francisco Riot of 1877 — feels like a culmination of the series, despite the cliffhanger that follows in the next episode.

Ultimately, the episode that best encapsulates Warrior for me is a season one installment in which a spaghetti-Western-style shootout erupts in a saloon in Grass Valley, Nevada. The small business is owned and operated by a former Chinese railroad laborer who toiled for decades before using his long-saved earnings to build a homestead in the middle of nowhere with his American wife. Their life feels like the realization of a humble immigrant fantasy that, suddenly sieged by violence, is as precarious as it is rare. As Baby Jun, one of the show’s few second-generation Chinese migrants, says in the episode, “I’m sure no fucking American. I don’t belong anywhere.” Warrior is about the many Americans who have not (and probably will never) really belong, but who have no choice but to keep grinding for the chance at a small piece of the American dream.

Warrior is streaming on HBO Max. For more recommendations from the world of culture, check out the One Good Thing archives.

How to tell stories about evangelical Christians that neither mock nor glorify them
This is the worst-possible wildfire scenario for Southern California
How Canada lifted nearly 300,000 kids out of poverty in a single year
Elizabeth Warren wants to break up Big Tech. Tim Cook says keep Apple out of it.
Federal watchdog says “substantial likelihood of wrongdoing” at US broadcasting agency
College towns without college students have small businesses struggling