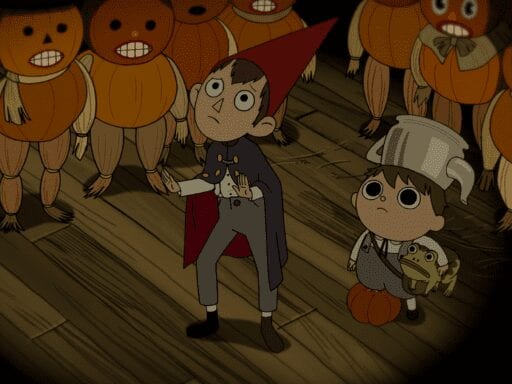 Over the Garden Wall is like a forgotten fairy tale, and it can be watched in under two hours.

I grew up on a hog farm in rural South Dakota. It wasn’t quite the middle of nowhere — it was situated along a major highway — but it was close. The sounds of semis barreling by in the middle of the night had a ghostly quality, passing us by between other lands.

The worst times were when my family would get home late from some function or another, and I would have to wander out into the dark, flashlight in hand, to make sure the pigs’ water containers were working properly. (Pigs, with their muddy noses, often clogged up the pipes with that mud, so the containers had to have the mud scraped out of them twice daily to keep them working their best.)

On fall evenings, with a chill settling in, the handful of trees between the hog lots and my house stood like roadmaps to some other world, lit up by the moon. I would conjure things that might live among the trees, ghosts or Sasquatch or other monsters that could haunt my farm and my childhood. But the trees didn’t hide monsters in their shadows. They just hid the house I grew up in.

Few artworks have captured the feeling of those chilly autumn evenings in the dark so well as Over the Garden Wall, a 10-episode Cartoon Network miniseries from 2014 about two brothers lost in a foreboding wood, trying to stay one step ahead of a fearsome beast. (It’s now available on HBO Max and Hulu.) Widely acclaimed at the time of its release and the winner of two Emmy Awards, Over the Garden Wall has become a cult classic and an annual favorite for the many fans who watch it each and every October.

Since each episode is 11 minutes long, you can watch the whole series in under two hours, and there are few better times to watch it than right now — now, during this specific October. From jack-o’-lanterns to dying leaves trapped by the wind on a fence to a musical score full of wistful melancholy, Over the Garden Wall captures something intrinsic about the dying embers of fall before winter spreads its chill across the sky. (Here, I will note that the series is appropriate for older children but might be a little too much for younger ones. If your kid is into monsters and other creepy things, however, you might as well give it a shot.)

That autumnal feeling stems from creator Patrick McHale’s use of Americana that has slipped out of common usage. In particular, many of the series’ images are taken from vintage postcards from the late 19th and early 20th centuries, which were exchanged by friends and family on occasions such as Halloween and Christmas. Thus, the series looks like a dream you maybe had once because it captures not images you’ve seen a million times before, but the much older images that inspired the more familiar ones. It’s like seeing the original after enjoying several generations of copies.

The series’ storytelling accomplishes the same. It has the feeling of a fairy tale or folktale, with numerous nods to stories you’ve maybe heard before. People are turned into animals or trees, Brothers Grimm-style, and the Beast, who is only seen in shadow, is a man with antlers sprouting from his head, similar to mythological figures like Herne the Hunter.

Becoming lost in the woods is a primeval story in almost all cultures but particularly in the United States, where the earliest European colonizers who landed on these shores saw enormous, deep, dark woods and were intimidated by their shadows. (Nathaniel Hawthorne’s famous short story “Young Goodman Brown,” in which a young man enters the woods to perhaps meet Satan himself captures that creeping terror well.) There is something more unsettling about emptiness than a more overtly scary creature. While Over the Garden Wall only rarely offers actually scary creatures, its core story is unnerving in a way that will hang with you.

The story is mostly a string to hang beautifully designed vignettes upon. Brothers Wirt and Greg are lost in the woods and need to get home. Along the way, they meet a frog and a talking bluebird named Beatrice. In each episode, the two meet more people who live out there, in the woods (or as the series would have it, “in the Unknown”), and they have to be clever to avoid the various fairy tale traps awaiting them in the woods.

If you find yourself wondering along the way whether these woods aren’t a real place and if something tragic befell Wirt and Greg to send them into the Unknown, well, that’s a logical assumption. The series clears everything up in the end, tying up its surprisingly large number of storylines in a fashion that proves satisfying but not overly neat. The reasons behind the brothers’ travels are revealed, and the woods themselves give up their secrets.

I haven’t been back to the place I grew up in several years, and the hog lots where I used to scrape mud out of watering containers are long since gone, after my family got out of hog farming in the late 1990s. I do not know when I will return, and I like to think that now, walking along in the dark, I would not be so unsettled by the thought of what might lie lurking in the trees.

But old habits die hard. October returns each and every year, not as spooky as it was in my youth but still with an echo of an echo of what once scared me. Wirt and Greg might reach their final destination, but the Unknown is still out there, waiting to pull the unsuspecting into a great, cavernous mouth lined with trees.

Over the Garden Wall is streaming on Hulu and HBO Max. The first episode of the miniseries and the short film that inspired it, “Tome of the Unknown,” are available on YouTube.

Trump’s association health plans are kind of a flop
Voice of America reporters: Trump-backed CEO “is failing” the US
Vox Sentences: Putin on a show
The coronavirus has now killed more Americans than the 9/11 terror attacks
After this summer’s Trump fundraiser backlash and boycotts, SoulCycle’s CEO has resigned
Before Alexandria Ocasio-Cortez, here are 5 of the biggest U.S. political upsets