Overfishing is decimating sharks. This map shows where they cross paths with fishing boats. 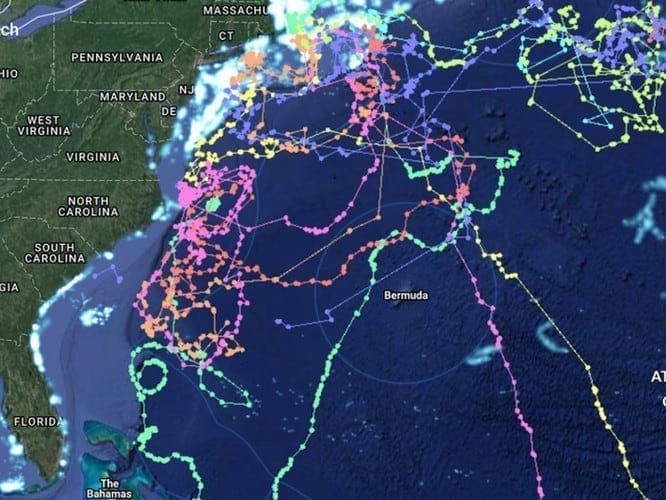 This Shark Week, you can track the journey of 45 sharks across the Atlantic Ocean.

Jaws. Sharknado. Megalodon. Our obsession with sharks peaks every year with nothing less than a week-long immersion into frightening, funny, and outright fin-sane (sorry) television devoted to the apex predators of the ocean.

Launched in 1988, the week of shark-related programming on the Discovery Channel has now become a cultural phenomenon in America. In 2015, the shows had an average viewership of 1.27 million people, and last year’s episode featuring Michael Phelps racing a (CGI) great white shark drew in a record 5 million viewers. President Donald Trump even asked Stormy Daniels to watch a Shark Week documentary with him during their now-famous 2007 meeting.

The time has come. #MonsterTag starts in 1 minute! #SharkWeek pic.twitter.com/0vKpHyFj9N

This year, the programming includes basketball star Shaquille O’Neal getting over a fear of sharks, the Shark Tank team deciding on a conservation group to invest in, and a special episode of Naked and Afraid called Naked and Afraid of Sharks.

But environmentalists have a love-hate relationship with Shark Week. On the one hand, it has led to the spread of misinformation about the massive fish, elevating the myth that they are dangerous and man-eating. NPR reported that in 2013, Shark Week led to an increase in demand for shark meat.

But on the other hand, Shark Week gives activists a powerful excuse to raise awareness about shark conservation.

The fossil record shows that sharks have been around for more than 400 million years, which means they have outlived dinosaurs. Yet they are now increasingly threatened, with 10 shark species (out of 1,000 total species of sharks and rays) critically endangered.

That’s because, while sharks may be at the top of the food chain in the ocean, they’ve got nothing on humans and our taste for shark fin soup (yes, we are the worst).

Overfishing and a lack of regulation is by far the biggest threat to shark populations, according to WWF. A study conducted in 2013 calculated that about 97 million sharks (or about 7 percent of sharks) were caught by fisherman and killed in 2010.

This year, conservation group Oceana has created an interactive map that overlays the movement of tagged sharks with commercial fishing activity. The result: a beautiful multicolored visual that allows users to observe where sharks and fishing intersect in the Atlantic Ocean.

The map was created with the help of Dr. Austin Gallagher of Beneath the Waves, a nonprofit research group that specializes in shark conservation, and Dr. Neil Hammerschlag, a research associate professor at the University of Miami Rosenstiel School of Marine and Atmospheric Science.

Between 2012 and 2018, they tagged 45 sharks along the East Coast of the US. Tracking a wide range of species — blue shark, tiger shark, shortfin mako, great hammerhead, scalloped hammerhead, porbeagle, and dusky shark — the researchers sought to visualize all the human infrastructure that sharks must navigate. The path of each tracked shark is overlaid on a map created by Global Fishing Watch, a nonprofit organization that tracks fishing activity to help regulate marine resources.

The shark tracking is limited to the western part of the Atlantic Ocean, so it does not cover the area where most sharks are caught (25 percent of captured sharks are caught in Indonesia, India, and Pakistan). Nonetheless, here are some cool things you can see on the map:

The movement of 45 sharks over the past six years

At the top of the food chain, sharks are essential to maintaining the balance of their ecosystems; they keep other species from overpopulating and are able to eat a variety of prey. Therefore, having a healthy shark population is a pretty good indicator of how healthy your overall ecosystem is.

The map shows the 45 tagged sharks, which cumulatively have covered 150,000 miles in the six years they’ve been tracked. One of the sharks, an adult male shortfin mako named Oscar, traveled more than 22,000 miles in less than two years. Here’s his path (in pink):

Another shark, an adult male blue shark named Buzz, traveled the furthest south of the tracked sharks. His journey (in pink) from Cape Cod to South America was more than 3,000 miles. The blue shark is highly migratory and tends to move toward the north Atlantic during the summer months and toward the south Atlantic during the winter. But Buzz’s trip is surprising because rising ocean temperatures have contributed to fewer sharks migrating south.

The movement of commercial fishing boats

You can also select commercial fishing (in blue), and see how this human activity overlaps with shark movement. Fishing has been more detrimental to shark populations than just about anything else.

Take some time to play around on the map on your own. You can filter for marine protected areas, filter for where fishing is restricted, analyze fishing in Indonesia, and change the colors! And if you press the “play” button on the lower left corner, you can track the sharks moving through the ocean over the past six years. Happy Shark Week!

Trump says he didn’t fire Mueller because he saw what happened to Nixon
The three charts that disprove Donald Trump’s convention speech
Vox Sentences: Strzok out
Paul Manafort’s tangle with the justice system is far from over
Virginia Democrats campaigned on their Green New Deal and fighting climate change. And won.
Why some states became coronavirus hot spots — and others haven’t