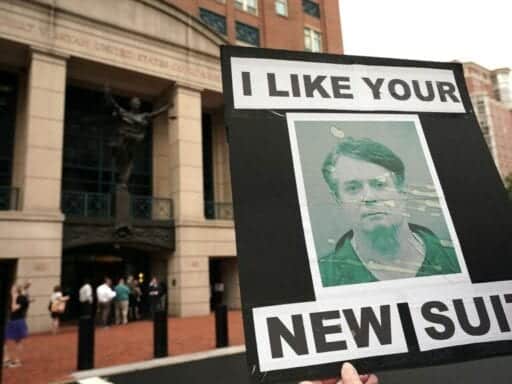 After being found guilty on eight counts of federal crimes on Tuesday, Paul Manafort’s journey through the legal system is far from over.

He faces a second trial for more alleged crimes in Washington, DC, in September, and he still needs to be sentenced for the counts that were decided Tuesday. He could still be re-charged on the 10 counts the jury couldn’t decide on Tuesday. He could potentially appeal. And that’s without getting into the wild cards, such as a plea deal in the upcoming trial or even a presidential pardon.

Manafort, the former chair of Donald Trump’s presidential campaign and a longtime GOP lobbyist, was found guilty by a Virginia jury on Tuesday of five counts of subscribing to false income tax returns, one count of failing to report his foreign accounts, and two counts of bank fraud. The jury deadlocked on 10 other charges against him, brought by special counsel Robert Mueller.

Manafort’s got a long road ahead of him now in terms of what’s next.

First, Manafort, jailed since June, will be sentenced for his eight-count conviction on Tuesday, and Mueller’s team will have to decide whether to charge him again on the other 10 counts. On the counts he’s already been found guilty of, Manafort faces a maximum of 80 years in prison.

But his time in the courts isn’t over: Manafort faces another trial in September on seven separate charges in Washington, DC. Brought against him separately for jurisdictional reasons, the charges relate to his foreign lobbying work and alleged witness tampering earlier this year. The trial will start on September 17.

Gene Rossi, a former federal prosecutor in the Eastern District of New York, told the Wall Street Journal that Manafort’s attorneys could have a good argument for moving the trial somewhere else or delaying it so that the publicity around their client settles. Manafort could also plead guilty to avoid another legal fight.

Thus far, he’s remained defiant and refused to cooperate with prosecutors or enter any sort of a deal. Per WSJ, Manafort’s lawyer, Kevin Downing, said he was still deciding whether to appeal Tuesday’s conviction and figuring out his next steps.

What happens with Manafort on the Trump front isn’t yet decided, either

There is the still-unresolved question that’s far more central to Mueller’s probe: whether Manafort or others in the Trump campaign worked with Russian government officials to interfere with the 2016 campaign.

Manafort was a figure of interest in the Russia investigation for a few obvious reasons: He chaired the Trump campaign, and he had longtime ties to Russia. Namely, he had worked for and was indebted to Russian oligarch Oleg Deripaska, his employee Konstantin Kilimnik had alleged ties to Russian intelligence, and his Ukrainian work was for the country’s pro-Russian political faction.

But Manafort was also involved in a couple of mysterious exchanges in 2016. He attended Don Jr.’s infamous Trump Tower meeting with a Russian delegation, where dirt on Hillary Clinton was promised. He also exchanged some curious, cryptic emails with Kilimnik about getting into contact with Deripaska during the campaign.

Mueller’s team confirmed in a court filing this year that he was investigating Manafort for potential crimes related to Russian interference with the election. Neither he nor any others in the Trump campaign have been charged with any such crimes yet. But the special counsel’s investigation is still proceeding. Manafort could conceivably lessen his sentence by agreeing to cooperate with Mueller’s team — if they’re even still interested in his cooperation.

It seems more likely at this point that Manafort is gunning for a pardon from President Trump. After all, Trump’s attorney reportedly discussed a potential pardon with Manafort’s attorney last year. And Trump himself has flaunted his pardon power in some high-profile ways.

No recent president has used the pardon power to short-circuit a continuing investigation into a major scandal from his administration. If this were to happen, it would indisputably be Trump’s most provocative move with regards to the Russia probe since the firing of FBI Director James Comey last year. Trump has not yet been ready to take that step. But it’s certainly possible that one day, he might.

The president has publicly lamented how unfair he feels the system has been to Manafort. On Tuesday after the verdict came down, Trump said it was a “very sad thing that happened” and said he feels “very badly” for Manafort.

He also expressed his sympathy for Manafort and his family on Twitter on Wednesday and juxtaposed his case against that of former Trump attorney Michael Cohen, who pleaded guilty to eight criminal charges also on Tuesday and seems open to turning on his former boss.

“Unlike Michael Cohen, [Manafort] refused to ‘break,’” Trump wrote, alleging that Cohen had made up stories to get an agreement. “Such respect for a brave man!” He also repeated his claim that the Russia investigation is a witch hunt.

I feel very badly for Paul Manafort and his wonderful family. “Justice” took a 12 year old tax case, among other things, applied tremendous pressure on him and, unlike Michael Cohen, he refused to “break” – make up stories in order to get a “deal.” Such respect for a brave man!

A large number of counts, ten, could not even be decided in the Paul Manafort case. Witch Hunt!

Amy Klobuchar drops out of the 2020 presidential race
Michael Cohen’s testimony could be bad news for Donald Trump Jr.
It looks like Amazon throttled sales of a zine after its author publicly criticized Amazon
Trump falsely claims coronavirus is “disappearing” and Russia isn’t meddling in the 2020 election
Apple’s new streaming service is still mostly defined by what we don’t know
Trump’s “Nervous Nancy” tweet shows his problem with powerful women