Poll: 53 percent of lower-income US households won’t be able to pay all of April’s bills 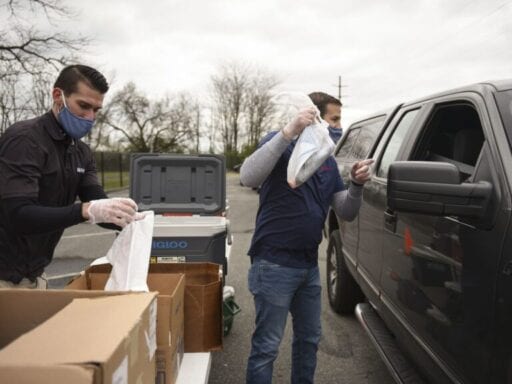 Share
Loading...
(L-R) Josh Forry of Sinking Spring and Kevin Snyder of Heidelberg Township pack up chicken meals for cars coming through the line on Saturday, April 18, 2020 during the coronavirus / COVID-19 outbreak. | Lauren A. Little/MediaNews Group/Reading Eagle via Getty Images

A new survey shows just how crushing the pandemic has been for lower-income Americans.

Just over half of lower-income adults in the US reported that someone in their household had either lost a job or lost hours due to the coronavirus pandemic, according to a new Pew Research Center survey.

The survey, of 4,917 US adults in April, revealed that, overall, 43 percent of Americans had someone in their household lose a job or have their hours reduced because of the pandemic. That’s a marked increase from late March, when only 33 percent said so.

But the job loss data is even starker for lower-income Americans. In this survey, Pew classified households making less than $37,500 as lower income, and found 52 percent of those in this income bracket said they or someone in their household had lost a job or had hours reduced. To make matters worse, just 23 percent of lower-income people had enough money saved to cover three months of expenses in case of a financial emergency, compared to 48 percent of middle-income and 75 percent of higher-income adults.

Economic data from the Federal Reserve has shown the economic collapse resulting from the coronavirus pandemic has been deep and impactful. More than 22 million people have filed initial claims for unemployment insurance over the past several weeks. But this study suggests that those who were already in difficult financial circumstances ahead of the pandemic are bearing the brunt of its economic damage. And many Americans were not in as strong a financial position as they may have appeared.

For instance, the study found the economic downturn has put a serious crimp in the average person’s ability to pay their monthly bills. Just over half of lower-income adults — 53 percent — said they’d have trouble paying some of their bills this month, while about a quarter of middle-income, and 11 percent of higher-income adults said the same.

This result shows that recent federal stimulus may not be enough to keep American families afloat through the pandemic-related recession. While Congress and the White House agreed to send checks directly to families in the second round of stimulus negotiations, the one-time, $1,200 sent to individual taxpayers is likely not be enough to cover even a month of rent given the median price for a month of rent in the US is about $1,231.

And in fact, just 46 percent of those surveyed said the stimulus checks will do a great deal or a fair amount to help them and their households. Conversely, a large majority (77 percent) viewed the stimulus as mainly benefitting large businesses.

Beyond income strata, the study also found the coronavirus is having unequal economic effects on people of different ethnicities. As Fabiola Cineas reported for Vox, Americans of color are dying of Covid-19 at higher rates than white Americans, and Pew’s research finds black and Latinx Americans have shouldered a disproportionate amount of the economic injury as well.

About six in 10 Latinx adults (61 percent) said they or someone in their household had lost their job or had their hours reduced; 44 percent of black adults reported the same, compared to 38 percent of white adults.

All of this puts additional pressure on family members who do still have jobs to continue going to work and possibly get ill themselves. Grocery stores have reported that employees have started to die from Covid-19, the disease caused by coronavirus, and public transit workers responsible for getting those employees to work have also seen deaths from the virus.

Since the survey was taken April 7-12, it doesn’t give a full picture of what effect — if any — developments like the Paycheck Protection Program and states starting to reopen have had. But the data clearly shows that Americans, especially those with low incomes, are in distress.

The survey results show that more federal aid will be needed before all of this is over. Federal lawmakers have begun discussing a number of ideas to help, from guaranteed paychecks for furloughed or fired workers to sweeping debt protection — and Congress seems poised to deliver renewed funding for the Paycheck Protection Program. But those in need of more immediate cash will likely be forced to wait.

Senate Majority Leader Mitch McConnell has not been enthusiastic about more direct cash stimulus for workers and said he won’t negotiate another big stimulus bill until Congress is officially back in session on May 4 at the earliest.

With bills and rent due now, that may be too late for a lot of American families.

Now is the perfect time to discover children’s fantasy author Frances Hardinge
Why movies went from 15 minutes to 2 hours
Cody Wilson, 3D-printed gun creator, arrested in Taiwan
Uber lost an eye-popping $5 billion in a single quarter
That famous cello prelude, deconstructed
In Such a Fun Age, everyone wants the black girl’s attention, but she just wants a real job