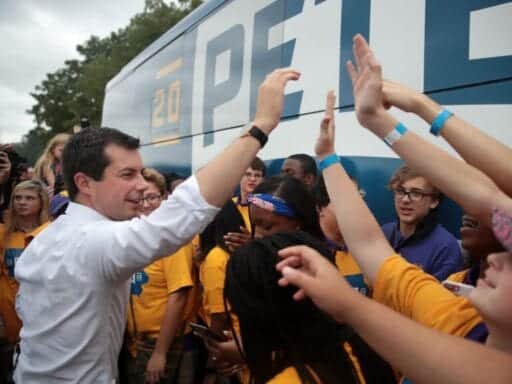 Joe Biden and Elizabeth Warren top the field in a Suffolk/USA Today poll. Buttigieg is third; Bernie Sanders is fourth.

The telephone poll, taken last Wednesday through Friday following the October Democratic presidential debate by Suffolk University and USA Today, found Biden in the lead with 18 percent support, Warren second with 17 percent, and Buttigieg third with 13 percent. The polling has a 4.4 percentage point margin of error, with 500 likely Democratic caucus-goers surveyed.

Sen. Bernie Sanders, the candidate usually in the third-place spot, was in fourth, with 9 percent support. This is the same level of support he enjoyed in the last Suffolk University/USA Today Iowa poll, taken in June.

Entrepreneur Tom Steyer, at 3 percent, was a distant fifth. After rounding up their results, pollsters found Sen. Kamala Harris, Sen. Amy Klobuchar, and Rep. Tulsi Gabbard all tied for sixth place with 3 percent (Steyer hit 3 percent without the need for any rounding). These results marked a stark reversal of fortune for Harris, who was second in the June poll.

The results confirm Warren’s status as a frontrunner, and show Biden maintaining strong support. Buttigieg, however, has risen dramatically. A Des Moines Register/CNN poll in September had the mayor in fourth place, with 9 percent support. And the June Suffolk University/USA Today poll found he had 6 percent support.

This is good news for Buttigieg, but climbing higher may be a challenge. He still is behind the surging Warren — who in addition to her momentum, has $25.7 million on hand — and Biden, who has less money to spend, but far greater name recognition than any other top candidate, and who has been at the top of polls since before he entered the race.

And although Sanders has been stagnant in recent polling, both in the Suffolk University/USA Today work and in national polls, he has recently rebooted his campaign, holding a massive rally in New York City Saturday and winning the much-sought after endorsements of two progressive lawmakers and Democratic Party superstars: Reps. Alexandria Ocasio-Cortez and Ilhan Omar. And like Warren, Sanders has a lot of money in the bank to deploy for staffing and advertising: $33.7 million.

Buttigieg has seen a slight increase in national support as well — RealClearPolitics’ national polling average has him currently in fourth place, with 5.8 percent support, a little more than a 1 percentage point increase from his pre-debate average. In that average, he trails Biden, Warren, and Sanders, who are at 29.2, 23.4, and 15.2 percent, respectively.

Support for all candidates remains fluid

The Iowa caucuses are four months — a full 105 days — away. The Democratic field has been shaken up considerably in the last four months (for instance, Harris and Biden have both seen their support erode, while Warren has risen dramatically), and a lot could happen in the next four as well.

The Suffolk University/USA Today polling bears this out: It found support for all candidates was soft. Sixty-three percent of respondents who currently support one candidate said they could change their minds ahead of the caucuses. And an increasing amount are undecided; in the June poll, 21 percent of respondents weren’t sure who they were voting for. In the latest survey, 29 percent were still deciding.

These findings reflect the results of the September Des Moines Register poll, which found about 20 percent of Iowa voters know for sure who they will caucus for, and that 63 percent might still change their minds.

The Suffolk University/USA Today poll, taken right after the latest debate, found that candidates’ performances weighed heavily on the results, and respondents said the evening favored Buttigieg in particular. Buttigieg cemented his status as a pragmatic centrist during that debate, as Vox’s Dylan Matthews has explained:

He attacked Warren on Medicare-for-all. He decried Beto O’Rourke’s gun control platform as unrealistic. He also decried Tulsi Gabbard’s approach to Syria, not because she’s de facto pro-Assad but because he thinks “American leadership,” by force if necessary, is important. In fact, it’s hard to identify a time this evening he made an identifiable argument from the left.

About 40 percent of respondents said the mayor performed better than they expected, and when the responses of those who didn’t watch the debate were filtered out, pollsters found Buttigieg actually led the field, with 19 percent support. Biden and Warren tied for second among that demographic, both receiving 17 percent.

Debate performance often influences polling. Harris received a bump in state and national polls following the first presidential debate in June, when she addressed Biden’s record on desegregation. Her elevated support, however, did not last, and Buttigieg has reason to be cautious about his new level of support as well. And just as this latest debate seems to have given him some momentum, the November debate could do the same for a different candidate — a big moment for Sanders, for instance, could place him back in third, or even first. Conversely, should Buttigieg falter in that next debate, his new supporters could place their allegiance elsewhere.

As Warren has seen in recent weeks, being a frontrunner also makes one subject to increased scrutiny. As he builds on his base of support, Buttigieg has seen this as well, facing criticism — including from fellow candidate Julián Castro — for accepting a donation from a Chicago attorney involved in the attempt to bury footage of a Chicago police officer shooting black teenager Laquan McDonald 16 times. That attorney — Steve Patton — was also slated to co-host a fundraiser for Buttigieg.

Buttigieg’s campaign returned the money and removed Patton from the fundraiser following the criticism. Following a University of Chicago event with political analyst and former Obama strategist David Axelrod, the mayor said, “I’m going to figure out how it happened and make sure it doesn’t happen again, but these things do happen and we accept responsibility and keep going.”

The incident again brought to the fore Buttigieg’s struggles with race and policing. He was criticized by black constituents in South Bend in June for his handling of an officer-involved killing of a black resident; when he left the campaign trail to resume his mayoral duties following the killing, he was not welcomed back with open arms.

One resident at the time said, “Are you really here because you care about blacks, or are you just here because you want to be the president?” Another said, “You’re running for president and you want black people to vote for you? That’s not going to happen.”

Shortly after that, Rep. Marcia Fudge (D-OH), the former chair of the Congressional Black Caucus told the Daily Beast, “Pete has a black problem. … I don’t know of one black person out of Indiana that supports him.”

Whether these issues will resurface as Buttigieg makes gains in Iowa remains to be seen. It is worth noting that the state does not have as many black voters as other early primary states like South Carolina, but issues of race are not only important to black voters.

Performing well in Iowa is key to winning the nomination, as momentum in that state has historically helped candidates perform well in New Hampshire and South Carolina, the states with the first two primaries. Biden currently leads in South Carolina (particularly among that state’s older black voters), and Warren leads in some recent New Hampshire polling, but a strong showing by Buttigieg in Iowa could change that.

In the weeks to come, he will need to work on building on his current momentum. He told Axlerod he’s found his lane, and voters are responding increasingly well to his pitch: “If you want the left-most possible candidate, you’ve got a clear choice. If you want the candidate with the most years in Washington, you’ve got a clear choice. For everybody else, I just might be your person.”

And like Sanders and Warren, he has financial momentum as well. The Washington Post’s Michelle Ye Hee Lee reports he has $23.4 million on hand, money that could buy a lot of ads and pay a lot of salaries in Iowa.

The clearest sign yet that Republicans are really worried about the new Obamacare lawsuit
How Mrs. Meyer’s took over the hand soap aisle
New national polls are disastrous for Trump — and state polls aren’t much better
Targaryen family tree Game of Thrones' dynasty explained
Quarantine frugality is different from traditional thriftiness
Why we say “OK”