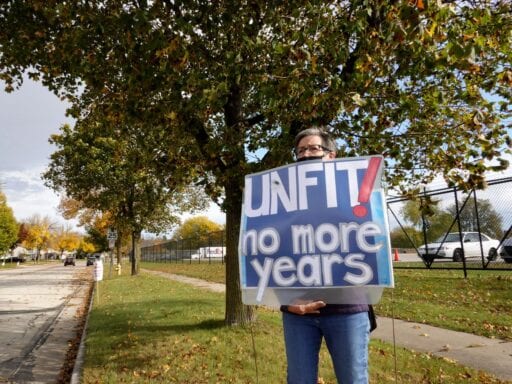 Share
Loading...
A demonstrator stands outside of a campaign rally with Vice President Mike Pence at Weldall Manufacturing on October 13 in Waukesha, Wisconsin — one of the states with the highest rate of new coronavirus infections. | Scott Olson/Getty Images

Will the latest Covid-19 wave seal Trump’s fate in the election?

The third — and largest — coronavirus wave is hitting the US just in time for the presidential election, with surges in key Midwestern swing states. Numerous polls suggest voters may be taking their pandemic pain and panic with them to the ballot boxes in these places: President Donald Trump isn’t just down in national polls — he’s faring especially poorly in battlegrounds where infection rates are spiking.

Over the last two weeks, the coronavirus case count in Wisconsin — where Trump won by a single percentage point in 2016 — has jumped 36 percent, to an average of 4,200 new infections per day. And that’s just among the people who’ve been diagnosed. The test positivity rate in the state is a staggering 28 percent, according to Covidexitstrategy.org, and health officials have already had to transform the state fair park into a field hospital to manage the crush of new patients.

The situation is nearly as worrisome in Michigan: Cases there have risen 73 percent in the last two weeks, to 2,600 per day, while the number of Covid-19 patients in hospital has more than doubled since the end of September. It’s another swing state, which Trump won by an even tinier margin of 0.3 percent in 2016.

In these places, and the states around them, the majority of voters apparently prefer Biden. That’s been largely true for some time, but is perhaps even clearer as Election Day approaches. “Biden is doing well everywhere — but his leads are even more solid in places where the coronavirus is hitting the hardest,” said Mike Greenfield, the chief executive officer of Change Research, who has been tracking the impact of the pandemic on voter decision-making.

These findings square with Change Research’s analysis. Looking at 110,000 survey responses from a variety of polls between June and October, they found whether a state was experiencing a Covid-19 spike or not moved the election by 3 percentage points on average.

The trend even held for Trump supporters. Overall, voters who favored Trump in 2016 and who are living in states with higher Covid-19 rates are about 50 percent more likely than voters in states where the virus is better controlled to support Biden in 2020, Change Research found.

“We suspect that Biden’s especially strong lead in Wisconsin is the result of people seeing the ineffectiveness of Trump’s policies in that state,” Greenfield said.

We won’t really know the extent to which the spread of Covid-19 in swing states might influence the election until after November 3 — when all the ballots are counted. Voting decisions are complicated, polls can mislead, and we’ll need more data to gauge how much coronavirus motivated decision-making.

At the same time, the pandemic has emerged as a key election issue, one that’s deeply touched, and continues to touch, all voters’ lives — how they give birth and say goodbye to loved ones who’ve died, how they work (if they still work), shop for groceries, and whether their kids can go to school or college. Most Americans are somewhat or very worried about both being infected by the virus and virus’s effects on the economy.

“[People in] places that were hit hard or are currently being hit hard are going to be looking to some solutions for their day-to-day problems,” said Amesh A. Adalja, a senior scholar at the Johns Hopkins Center for Health Security. They “may be looking to find a solution in the other candidate,” he added.

From failing to get Covid-19 testing up and running, to sidelining America’s leading public health agency, to politicizing mask wearing and lying about the danger of the virus, the Trump administration has grossly mishandled the pandemic. And these public health failures don’t even account for the collateral damage from the virus: the stock market is cratering, there are record unemployment claims, people are losing their health insurance and homes, and more Americans are literally going hungry. Rebuilding from the pandemic will take a war-time effort, at a moment when 1,000 Americans are dying each day from the disease.

“It is not surprising to me that voters are recognizing the sheer incompetence of the current administration — some of it deliberate — at this task,” Adalja added.

Days before the election, Trump is still lying about the reality of the pandemic. “We’re rounding the turn,” he said at an October 25 rally in Lumberton, North Carolina. “Our numbers are incredible.”

Biden has cast himself as the candidate who will help America rebuild. There’s no overstating the size of the challenge the former Vice President faces in doing that — but he’s the candidate who is owning up to the scale of the problem, said Shannon Monnat, professor and co-director of the Policy, Place, and Population Health Lab at Syracuse University.

“The president has been asking Americans to deny what they see happening right in front of them,” she added. “People are tired. They want to see some leadership and a coordinated national coronavirus response.”

What we know about the Hanukkah celebration stabbing in New York
6 things to know about telehealth
Why are Russian coronavirus doctors mysteriously falling out of windows?
Republicans are using a pandemic to push anti-abortion and anti-trans agendas
How racism and poverty made Detroit a new coronavirus hot spot
Bernie Sanders has an answer to the eternal question, ‘baby how u feelin’