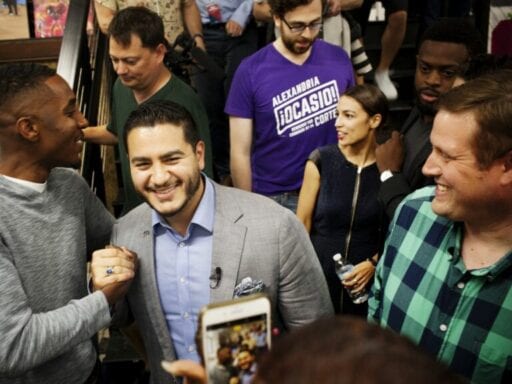 These progressives want to beat Trump. But first, they want to fix the Democratic party.

GRAND RAPIDS, Michigan — In a swing state that dealt a fatal blow to Democrats in 2016, two rising progressive stars thrilled a crowd of 1,200 by aiming their harshest words not at Donald Trump, but at the Democratic Party, which they declared too beholden to corporations and lacking solutions for working people.

The crowd, packed tightly into seats at a local high school, chanted, “I believe that we will win!” One woman waved a sign proclaiming, “I’m feeling the Bern.”

They weren’t there to see Bernie Sanders, but two of his young disciples: Alexandria Ocasio-Cortez, the 28-year-old Democratic Socialist who took down House Democratic Caucus Chair Joe Crowley in his home district in the Bronx, and Abdul El-Sayed, 33, a progressive Democrat running for Michigan governor who wants to bring Medicare-for-all to the state.

Sanders won Michigan in the 2016 primaries. Trump won the state in the presidential race. The primary in the 2018 governor’s race symbolizes the Democratic Party’s growing pains, pitting a progressive push for Medicare-for-all against the Obama legacies of the Affordable Care Act and Medicaid expansion. It’s highlighted issues of race and identity — if El-Sayed wins the primary and the general, he could be the first Muslim governor in America. And it’s illustrated the continuing influence of money in politics, with a wild card self-funded millionaire running as a third candidate.

Democrats desperately want to win back the Midwest states that swung for Trump. The question is how. Ocasio-Cortez, El-Sayed and their supporters think Democrats need to give their base reasons to turn out — getting money out of politics, passing Medicare-for-all, and raising the minimum wage to $15. Compromise be damned.

El-Sayed’s campaign looks a long shot, based on the polls. But the enthusiasm of the 1,200 people in Grand Rapids, 500 people at another campaign stop in Flint, and 700 more at a final rally in Detroit shows how much energy there is behind these ideas. He recently secured Sanders’s endorsement.

There’s a competitive race in both the Republican and Democratic primaries this year to see who will replace term-limited Republican Gov. Rick Snyder. The Democratic primary features El-Sayed, frontrunner Gretchen Whitmer, the former Democratic leader of the Michigan state Senate, and scientist and millionaire Shri Thanedar.

Whitmer has been leading every poll with a double-digit margin — although both she and El-Sayed say they put little stock in the latest Detroit Free Press poll, conducted via landline. Michigan political experts are hesitant to label Whitmer a centrist Democrat, but she talks frequently about her record of collaboration with Republicans in the state legislature to pass things like Medicaid expansion. Meanwhile, El-Sayed says the Democratic Party should only concern itself with the needs of the base.

“This is a progressive state that is looking for progressive politics,” he told reporters on Saturday.

Thanedar has also proved to be a wild card. The self-made millionaire has poured more than $10 million of his own money into his campaign and blanketed the airwaves with ads that paint himself as a Sanders-style progressive. There are open questions about his political allegiances: “By some accounts [he] wasn’t even sure if he was running as a Democrat or Republican,” said Michigan State University political science professor Matt Grossmann.

In any other year, Whitmer might be viewed as the progressive Democrat in the race: She has a long legislative track record in the state Capitol, including rallying against right-to-work, the law that’s weakened labor unions in the US; passing Medicaid expansion; and going public with her own story of sexual assault in a 2013 speech on the floor of the Senate.

“I was the most progressive person in the legislature when I was serving, all 14 years that I was there,” Whitmer told Vox. “And I’m also the only person that knows how to get things done at the state Capitol. It’s one thing to take positions, it’s another to actually have receipts.”

It’s true that Whitmer has spent plenty of years getting hammered by Republicans as too liberal. But in the governor’s race, she’s betting that emphasizing some bipartisan bona fides will appeal to independent swing voters. She proudly mentions Republican voters who are backing her. She’s staking out positions on issues she believes can get bipartisan consensus: fixing the state’s cracked roads, expanding Medicaid, and improving the public school system.

“We are a state that goes back and forth, we are not a state that comfortably fits into one party or another,” she told Vox, highlighting examples where she worked with Republican legislators and Gov. Rick Snyder. “I crossed the aisle to deliver Medicaid expansion.”

El-Sayed, meanwhile, is positioning himself as an unbeholden newcomer with fresh ideas.

Some expert observers doubted the accuracy of casting Whitmer as a centrist or the campaign as the second coming of the 2016 primary: “I covered her time in the legislature, and she was one of the most progressive Democrats that I covered,” said Michigan Democratic strategist Susan Demas, a former state reporter.

Still, among El-Sayed supporters, there is a lingering perception that Whitmer is of the Michigan establishment, and as such, won’t be able to deliver for them. And that’s not isolated to Whitmer — some said that goes for Democrats in Washington, DC, as well.

Democrats “need to be more daring and move away from center politicians,” said Madylin Barker, 23, a music educator and El-Sayed supporter from Jenison, Michigan. The Democrats, she and her friends argued, needed their own version of the House Freedom Caucus — the group of hardline conservatives in Congress that regularly bends moderate Republicans to their will.

Others, especially voters who are suffering an ongoing drinking water crisis in Flint, are skeptical of Michigan politicians writ large and are looking for some new blood. “He has no previous experience,” said Flint voter Syr Ron, adding that might make him more likely to vote for El-Sayed.

El-Sayed is running on Medicare-for-all

The contrast between Whitmer and El-Sayed is especially apparent when it comes to their health care visions for Michigan.

El-Sayed is a doctor and the former health director for the city of Detroit, while Whitmer negotiated a bipartisan deal to expand Medicaid in the state while in the legislature. (Her father is also the former president and CEO of Blue Cross Blue Shield of Michigan, and executives at insurance company reportedly encouraged their employees to donate to her campaign, something El-Sayed has seized upon to paint Whitmer as someone in the pocket of corporations.)

Whitmer’s gubernatorial platform aims to bolster the Affordable Care Act, further expand Medicaid, and repeal Republican work requirements, El-Sayed wants to scrap the current system and go with a statewide single-payer system. He’s calling his detailed 24-page plan MichCare, which he plans to pay for with payroll and business taxes.

Statewide single-payer has never been tried before. (Vermont seriously studied the idea, but it was rejected by the state’s former Democratic Gov. Peter Shumlin.) But as Medicare-for-all fervor sweeps the Democratic Party’s left flank, the idea is coming up again.

“People know exactly what I’m talking about when I say single-payer,” El-Sayed told Vox. “I’m not interested in telling Michiganders what I want to do without telling them how I want to do it.”

El-Sayed’s detailed policy proposals are one of the main reasons why national progressives say he’s the real deal. In addition to single-payer, he’s rolled out pages of additional plans for improving the state’s schools, investing in green jobs and rural broadband, and fixing the state’s infrastructure.

But MichCare is his signature bold idea, and national progressives love it.

“I’ve seen a lot of plans, I’ve seen the proposals paying for those plans, and I haven’t seen anything nearly as comprehensive as the MichCare plan,” said activist and People for Bernie co-founder Winnie Wong, who signed on as an adviser for the El-Sayed campaign after she read the proposal and met the candidate.

Meanwhile, Whitmer is skeptical single-payer can get done: “I’m not going to utter buzzphrases, I think it’s deceptive to tell people that you can do something that relies on two Trump waivers, an amendment to the state Constitution, and $100 billion,” she said.

After the surprise thrashing that Democrats took in Midwestern states including Michigan and Wisconsin in 2016, the party wants to win very badly.

Progressives do too. Fresh off her win in New York City, Ocasio-Cortez is currently touring states from Michigan to Missouri to Kansas to boost candidates in the Sanders mold, hammering the point that families from the Bronx to the Rust Belt are facing many of the same challenges.

After her seismic win against Crowley, Ocasio-Cortez has become a one-woman campaigning force of sorts, traveling to states all over the US in support of a slate of progressive candidates, including congressional candidates Brent Welder and James Thompson in Kansas, and Ayanna Pressley in Massachusetts, US Senate candidate Kerri Harris in Delaware, and El-Sayed in Michigan.

“He has a vision for the future of Michigan,” she said. “He’s without a doubt the strongest progressive candidate in this race. He knows that the only way forward, for us to grow better together, is to ensure that every single Michigander can see a doctor without a copay.”

Some of the people at El-Sayed’s Grand Rapids rally were simply looking to get more information about the candidates, while others had made up their minds.

“To me, it feels like he’s not taking compromises,” said Whitney Brainard, 29, a band director in Grand Rapids. “He’s standing up for what I want.”

“I’m only 20, but this is the first time I’m excited to vote for a candidate,” said college student Drew Moles.

Millennials weren’t the only ones that were excited.

“We’re the people in the party,” said El-Sayed volunteer Ann Swisher, who gave her age as ‘60+.’ “The Democratic Party has to get in line, or the Democratic Socialists are going to split off and form a new party.”

Campaign officials for Whitmer were less than thrilled: “You just ruined my day,” said Tashawna Gill, the Whitmer campaign’s political and regional field director, when I told her how many people had shown up to El-Sayed’s Grand Rapids event. Gill was only half-joking; her reaction when she heard Ocasio-Cortez was stumping for El-Sayed was: “Holy shit! Who are we getting, Joe Biden?”

Even with the progressive rock stars endorsing him and campaigning with El-Sayed, some say it’s too late in the game for him to be successful.

In a race where El-Sayed is hammering his opponents for their self-funding and donations from unions, businesses, and progressive groups, his biggest difficulty is that he hasn’t been able to raise the type of money as progressive Senate candidate Beto O’Rourke. While fulfilling a pledge to not accept corporate PAC money, El-Sayed has raised more than $4 million, half of which he raised this year. But his campaign has spent the majority of that money, with just $260,000 cash-on-hand, according to the Detroit News.

“If Bernie Sanders had come out early for him and signaled, ‘This is my guy,’ I think this race could be different,” said Michigan Democratic strategist Susan Demas. “Anybody would agree, it would have been far more useful to him earlier.”

Still, steep odds are something Sanders supporters are used to, and they are confident El-Sayed can still pull out a win.

El-Sayed told the audience at his events that recently this has become much more personal to him, after he and his wife Sarah had their first child.

“We’ve got a choice in 2018,” El-Sayed said. “It’s about whether we want our government answering to us, or answering to the corporations who bought and sold our politics for far too long.” The appeal of that idea already resonated in 2016 with Sanders and is poised to grow stronger in 2018 and beyond. But there was little question how the audience at the high school in Grand Rapids felt.

The people roared their approval.