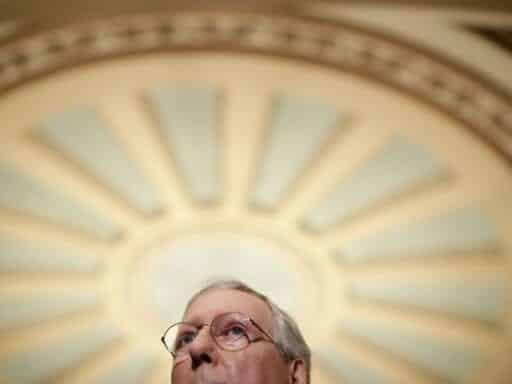 “Where are the babies, Mitch?”

Senate Majority Leader Mitch McConnell was followed by protesters chanting, “Vote you out!” and “Abolish ICE” after leaving a Louisville, Kentucky, restaurant on Saturday — marking the latest in a string of incidents where activists have confronted Republicans in public spaces.

This incident, which was first reported by the Washington Post, is the second time that protesters have taken aim at McConnell in recent weeks, slamming him for the Trump administration’s recent family separation policy and calling on the lawmaker to upend the Immigration and Customs Enforcement Office (ICE). McConnell has opposed family separations, but backs the holding of families in detention.

After McConnell was spotted at a restaurant in Louisville, several protesters filtered over from a separate rally that was taking place outside the city’s ICE office. That demonstration included members of a local chapter of the Democratic Socialists of America.

The activists followed McConnell as he walked to his car, slinging both personal insults and policy attacks. “Where are the babies, Mitch?” said one protester. “Turtlehead!” chanted another.

“We know where you live,” one protester said repeatedly. A representative of the DSA has since said that activist is not affiliated with its organization.

McConnell and his wife, Transportation Secretary Elaine Chao, were also accosted earlier this summer after leaving an event in Georgetown, where activists pressed the lawmaker about family separations and asked, “How do you sleep at night?” Their comments prompted Chao to push back and say, “You leave my husband alone!”

We confronted @SenateMajLdr and @SecElaineChao with @ProPublica audio of children separated from their families at the border while leaving a @Georgetown event. We must #AbolishICE & #AbolishCBP! #FreedomforImmigrants pic.twitter.com/ljv70F3F0L

McConnell’s office seemed unfazed by the recent encounter. “If the Leader comments on being called a fascist and a supporter of ICE by a small handful of extremist protesters then I will let you know,” McConnell spokesperson David Popp told the Post.

A warning sign for the House GOP: Democratic challengers are raising more money
On Instagram, there’s an influencer for everything. Even pumpkins.
The most shocking line in Vice President Pence’s 2020 RNC speech
“Profound sense of guilt”: Why some Covid-19 survivors are still suffering
Aurora, Illinois, shooting: what we know
Florida, Arizona, Oklahoma primary elections: live results, news, and analysis