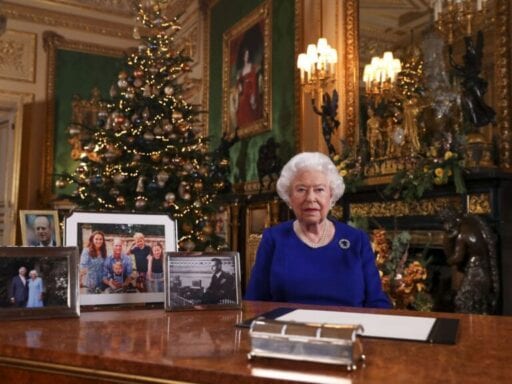 Is the queen really trying to send a message about Brexit through her choice of brooch?

Queen Elizabeth gave her annual Christmas Day queen’s speech yesterday, preaching a message of reconciliation and unity in the wake of the UK’s years-long debate over Brexit — and possibly hinting at her own views about Brexit with her fashion choices, if internet sleuths are to be believed.

The annual Christmas speech is a traditional address delivered by the monarch. In this year’s edition, prerecorded at Buckingham Palace and broadcast nationwide, Queen Elizabeth summarized 2019 as “quite bumpy.” She highlighted the birth of her eighth grandchild and also talked about her husband, 98-year-old Prince Phillip, who earlier this week was released from the hospital where he spent four days for “observation and treatment in relation to a pre-existing condition.”

Reflecting on the 75th anniversary of the D-Day landings celebrated this year, the queen noted “those who had formerly been sworn enemies came together in friendly commemorations. Such reconciliation seldom happens overnight.” She went on: “It takes patience and time to rebuild trust, and progress often comes through small steps,” seemingly alluding to the deep divisions brought about by the Brexit referendum, subsequent debate, and two snap elections.

The speech came in the wake of recent parliamentary elections, in which the country’s pro-Brexit Conservative party achieved its largest majority since 1987. With control of the legislature, British Prime Minister Boris Johnson has promised to leave the EU once and for all by January 31 next year.

The queen did not explicitly state her views on whether the UK should leave the EU. But that did not stop some commentators online from putting forward their interpretations of the queen’s fashion choices as coded messages about Brexit. It’s not the first time the internet has devoted its forensic talents to decoding the queen’s appearance — and, just as in previous times, this year’s decoders aren’t especially persuasive.

The queen’s brooches and what they mean

For her address, Queen Elizabeth wore a royal blue cashmere dress and the sapphire and diamond Prince Albert brooch, which was a present from Albert to Queen Victoria on the eve of their wedding in 1840.

According to several Twitter users, these choices served as evidence of the queen’s secret support for remaining in the European Union.

The dress is similar to the blue of the EU’s flag. The brooch features a deep blue stone surrounded by 12 diamonds and resembles the flag’s circle of stars.

The Queen has full editorial control of the Queen’s Speech and can choose wether or not to give one. She chose not to in 1969. So treat the speech as her personal views, right down to her choice of an EU blue dress and an EU stars broach. https://t.co/ovmWh3n5CX

The queen’s speech and the speculation over what her clothing choices meant recalled past times when people have speculated over secret messages in her appearance. In a speech to open Parliament after a snap election in 2017, the queen wore a blue hat with yellow flowers that vaguely resembled the EU flag, sparking speculation by some that she was a secret Remainer.

Not to be facetious but the Queen’s hat looks like the European Union flag pic.twitter.com/1nDJ3sWDTd

Deciphering the subtle political messages of the queen’s fashion decisions has become something of a spectator sport for royal enthusiasts. “What she cannot overtly say with language she secretly says with clothes,” writes London style writer Sali Hughes in her new book, Our Rainbow Queen: A Tribute to Queen Elizabeth II and Her Colorful Wardrobe. “Truly, Elizabeth II’s trolling through fashion could inspire an assassin.”

The political speculation isn’t limited to domestic politics, according to royal observers. On the first day of a 2018 state visit from Donald Trump, it was noted that she wore a simple green brooch given to her by former First Lady Michelle Obama, fueling speculation that the queen was throwing shade at Trump over his well-documented contempt for the previous occupant of the White House.

The perceived slights toward Trump apparently didn’t end there, as the Guardian’s Hadley Freeman explained:

On the second day, she wore a brooch given to her by Canada, a country with which Trump is less than pleased at the moment (also, it was in the shape of a snowflake, a classic Trump term for people who disagree with him). And, for the last day, she chose a brooch the Queen Mother wore to the funeral of King George VI, so not one associated with happiness and joy. Queen’s brooches: 3. Trump: 0.

While speculating over the queen’s secret political leanings by reading the fashion tea leaves may be a fun pastime for royal observers, it’s unlikely that she’s trying to send coded messages to the masses through her choice of brooch. Earlier this year, she signed off on Prime Minister Boris Johnson’s request to suspend Parliament for an unusually long period of time, which political commentators speculated would have forced through a hard Brexit without the legislative body’s approval — hardly the move of someone who was pushing for the UK to remain in the EU.

That move was overturned by the country’s highest court, which determined that Johnson’s request was unlawful. Interestingly, more fashion speculation emerged from the ruling when the president of the UK Supreme Court, Lady Brenda Hale, wore a spider-shaped rhinestone brooch while reading out the court’s decision.

I’ve just clicked the significance of Lady Hale’s brooch. Boris The Spider! A song by The Who and written by John Entwhistle.

More likely to be Boris the Spider who causes as much trouble as he can in the house. pic.twitter.com/DXlYBlHIvD

From the outside looking in, some of the speculation looks like a wild conspiracy theory. Whether or not people truly believe in this tea-leaf reading is hard to tell. But the evidence suggests that the wild speculation is just that — wild speculation — injecting a bit of fun and allowing folks to project their own political wishes onto drab political reality.