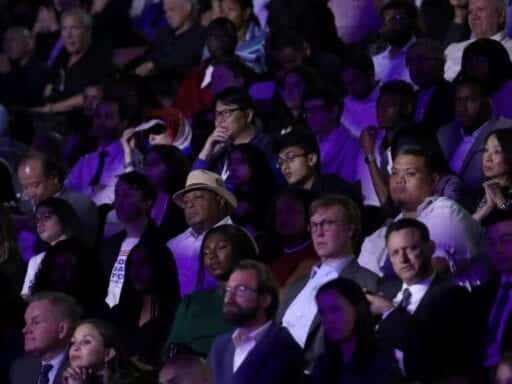 Candidates are getting better at talking about race and racism, but they’re still struggling to show it at the debates.

Thursday’s Democratic debates included an early discussion of racism that seemed poised to be substantive but didn’t fully pan out.

It began when ABC News correspondent Linsey Davis asked former Texas congressman Beto O’Rourke how he would address racism and a racial divide that young black voters have said they are particularly concerned about this year.

“Racism in America is endemic,” O’Rourke said in his response. “It is foundational.”

Being that the September debate marked the first time that all of the leading candidates stood on one stage, the question seemed like the beginning of the most extensive discussion of race seen in a 2020 primary debates yet. After all, the first two debates in June and July were each split into two nights, and they were both very uneven in their attention to matters of race, racism, and racial inequality.

But the improved debate that was hinted at didn’t completely happen. As the ten candidates spoke at Texas Southern University, a historically black college, it became clear that even as they talked more about things like racism and criminal justice, the scope of the discussion was still limited and lacked specifics.

O’Rourke for example, said he would sign HR 40, a bill to study reparations introduced by Congressional Black Caucus member Rep. Shelia Jackson Lee, but he didn’t say how he’d actually help get the bill through Congress, or if he’d take action on his own if the bill couldn’t pass. Julián Castro highlighted that he has an ambitious police reform plan — a plan that has been supported by activists, but he was unable to explain what makes his plan unique.

Some candidates who have worked to address the policy concerns of black voters on other issues like student debt, like Sen. Elizabeth Warren, didn’t really get a chance to speak at all (though she brought up some of these issues later in the debate).

When the section ended after 15 minutes, even as candidates continued to discuss race and racism at other points in the three-hour debate, it was unclear exactly what information voters — particularly the black voters expected to make up as much as 25 percent of the Democratic primary electorate in 2020 — were to parse from these answers or what policy differences between candidates were revealed. And save for a section on immigration, and a brief discussion of race and education, the needs of many communities of color weren’t given attention at all. The needs of indigenous people, who have seen increased attention in recent months from several Democrats, weren’t discussed. Latino voters fared better during frequent mentions of hate crimes and immigration, but even there, more issues could have been addressed.

In many ways, this highlights an issue that has plagued every debate so far, that candidates are talking about race and racism, but they’re not actually debating on these topics. Compared to sections on immigration and healthcare, conversations on race at the 2019 debates have felt less like an opportunity to seriously compare policies and ideas between candidates, and more like watching a string of requisite statements denouncing things like white supremacy, police violence, voter suppression, and health inequality.

To be fair to the candidates, some of this is due to how questions get framed, and the fact that these debates move quickly means that a serious discussion of each and every policy isn’t possible. And the issue isn’t that they’re ignoring race and racism on the campaign trail, many of the candidates are talking about it often and they’ve presented a number of differing policy plans.

But even limited statements on these topics matter: various polling of black voters this year have shown that they are concerned about the economy, healthcare, and racism — and that includes how they intersect and influence disparities in education, quality of life, and other things. As the Trump administration continues to be criticized for emboldening white supremacists and rolling back civil rights efforts, voters of color more broadly say they want candidates to clearly explain how they will make their and their communities better.

So far the candidates have shown that, as a whole, they all want to improve race relations and the lives of communities of color from where the Trump administration stands. That certainly matters, and given President Trump’s unpopularity, voters of color likely see any of these candidates as an improvement. But for people who aren’t surrounded by policy discussions on a daily basis, the shallowness of the recent debates makes it harder to truly understand how these candidates differ in the scope of their proposals and in how much they plan to use policy to help communities of color, communities that have some shared concerns, but also have distinct and specific needs.

This is a big task. But to reach a large swath of voters of color in the primaries, it is also a necessary one: the debates are how many of these voters will begin to understand these issues and figure out which candidates to look at further. Unfortunately, Thursday night was yet another example of how the debates aren’t giving them enough information.

Candidates are talking about racism — but they could go deeper

The section of the debate that most clearly focused on race covered a decent amount of ground, but it moved quickly among several candidates, changed focus more than once, and skipped some people entirely, making it hard to get a clear picture of exactly what plans candidates have, and how they differ from one another.

Some of this is due to the fact that talking about race means talking about a lot of things: it certainly includes discussing racism and white supremacy, but it also means discussing how race affects one’s experience of the economy, of healthcare, of the justice system, of education, and of democratic process itself. It also means talking about a number of marginalized communities with specific needs. And on Thursday, what could have been a nuanced discussion about race and racism quickly fractured as different candidates were asked to weigh in on different topics in quick succession.

For example, before Davis’s question to O’Rourke fully had time to breathe — and before any candidate besides Castro could respond to O’Rourke’s point about America’s long history of racial injustice, candidates were already being asked about their specific records in the justice system.

This kept happening. Sen. Cory Booker, when asked what he would do to fight racism, discussed the justice system, but also said that he would “make sure that systemic racism is dealt with in substantive plans from criminal justice reform to the disparities in health care to even one that we don’t talk about enough, which is the racism that we see in environmental injustice in communities of color all around this country.” But even after highlighting a way that the discussion of racism has often fallen short, he didn’t actually get a chance to explain what he would do because he ran out of time.

It wasn’t the only instance where this happened. At July’s debates in Detroit, for example, the first night of debates often framed the issues of voters of color against “Midwestern voters,” dismissing the fact that a lot of people of color live in the Midwest. Thursday didn’t do anything as harsh and even improved in some ways, but it still felt undercooked, as if the moderators and some candidates alike are still figuring out the best way to talk about these issues.

Candidates for example, could have been asked about what exactly they would do on voting rights, or how their healthcare plans address significant racial disparities in health outcomes and access. They could have, as Booker suggested, started to have a conversation about environmental racism. They could have been asked about jobs and the economy. They could taken the conversation about policing that was briefly raised and gone even deeper to explain not only why this is an issue, but what makes their specific plan on it the best for voters.

There’s been an argument that candidates going too big on matters of race and racism in the primary might frighten some white voters, giving President Trump more ammunition in the general election. But voters of color matter too, and given their power in the Democratic primary, clearly speaking to their concerns and experiences is something that needs to happen. As of now, voters are left with another debate that discussed race and racism but failed to really dig deep.

This week, Vox Book Club meets Inigo Montoya. We are not prepared.
Bernie Sanders’s immigration plan puts the rights of immigrant workers into focus
Americans are torn on whether to remove Trump, according to the polls
Why Bill Gates is worried
The biggest obstacle to remote voting in Congress may be Democratic mistrust of the Supreme Court
AT&T is cutting jobs, but Trump is focused on its management of CNN instead