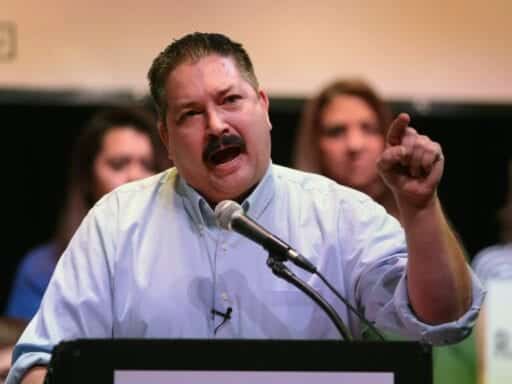 Bryce, the populist ironworker and union organizer who goes by the nickname “Ironstache,” beat out Cathy Myers, a school board member and teacher, in the district’s bitter Democratic primary battle Tuesday. The race was called with 68 percent of precincts reporting; Bryce led by more than 20 points. He will face Republican Bryan Steil, a well-known local business executive with Ryan’s endorsement, in November.

For months, Bryce and Myers have been embroiled in a messy mudslinging match to clinch the chance to win Ryan’s congressional seat. Bryce first gained a national platform after releasing a viral campaign ad in the summer of 2017, raking in donations and winning some high-profile endorsements, like Sen. Bernie Sanders (I-VT) and Wisconsin Rep. Mark Pocan (D), the chair of the House Progressive Caucus. But the ugly primary race could damage Bryce for the general.

Bryce has had media flubs and has faced questions over his past failures to pay child support and past arrests for marijuana use and a DUI — a record Myers actively attacked Bryce on in the lead-up to Tuesday’s election.

An Army veteran who bills himself as the working class candidate, Bryce was a Sanders delegate for Wisconsin in the 2016 Democratic National Convention. His platform mirrors that of progressive candidates across the country, from Medicare-for-all to tuition-free college. He’s also the first congressional candidate who has a unionized campaign staff.

Unseating Ryan has always been something of a pipe dream for Democrats. But with Ryan’s retirement, Democrats have a real chance to win the open seat. The Cook Political Report rates the race Lean Republican or R+5. Hillary Clinton lost the district by 11 points in 2016, and Barack Obama lost it by 5 in 2012. But Obama won the district by 3 points in 2008, and a surge in Democratic voters could catapult the party to a win.

If Bryce can brush off the negative primary it’s possible Paul Ryan’s seat could see a Democrat for the first time in more than two decades.

Inside the risky, reckless world of pandemic day trading
How 1-800-Flowers.com became one of the biggest, clunkiest names in Valentine’s Day gifts
Brittany Runs a Marathon
9 winners and 6 losers from the 2018 Emmy nominations
Democrats have an ambitious plan to save American labor unions
Trump met with refugees and seemed to learn about major humanitarian crises for the first time