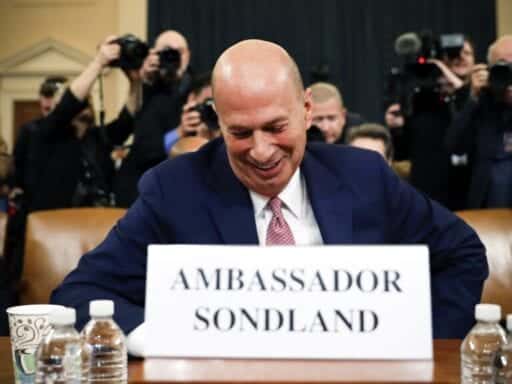 Share
Loading...
US Ambassador to the European Union Gordon Sondland arrives to testify before the House Intelligence Committee, on Nov. 20, 2019. | Andrew Harnik/AP

Gordon Sondland, the US ambassador to the European Union, is testifying to the House Intelligence Committee Wednesday morning in the highest-stakes impeachment hearing yet — and his opening statement has now been released.

In it, Sondland confirms that there was a “quid pro quo” imposed on Ukraine, and says that he was carrying out the “orders” of President Donald Trump.

Sondland faced intense criticism for omissions and purported failures of recollection in his October closed-door testimony, and he already submitted an “addendum” to supplement it. This is the latest version of Sondland’s account. Read it at this link, or below:

Watch Sondland’s full opening statement and testimony on the official House Intelligence committee live stream here, you can also watch it on C-SPAN or on Vox’s Facebook and Twitter.

If you watch one hearing this week, make it this one: