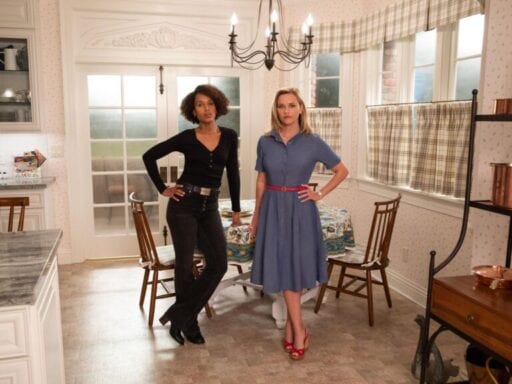 The new show adapts Celeste Ng’s 2017 novel into a ham-handed melodrama about race and motherhood.

The world is on fire right now, so the idea of watching a nice premium limited series about a bunch of teeny tiny little fires everywhere sounds very appealing. And if said series stars two ringers like Reese Witherspoon and Kerry Washington — both of whom also co-produce — and is based on a critically acclaimed novel by Celeste Ng (Ng has an executive producer credit), why then, all the better!

And yet it brings me no joy whatsoever to tell you that Little Fires Everywhere, whose first three episodes are streaming now on Hulu, is not particularly good.

It’s not the actors’ fault. Witherspoon and Washington turn in lovely performances as Elena and Mia, respectively, the two women whose relationship anchors the story. As Elena, Witherspoon angles her Tracy Flick brightness so that it’s beaming out over something brittle and middle-aged and wounded, and Washington mingles her Olivia Pope steeliness with Mia’s maternal tenderness until the combination feels vicious.

It’s also not the source material’s fault. Celeste Ng’s Little Fires Everywhere is a rich and nuanced book about motherhood and suburban conformity, a book that makes everyone a little bit wrong and a little bit right and never, ever lets either its characters or its reader off the hook.

But Hulu’s Little Fires Everywhere, created and executive produced by Liz Tigelaar, fails to capture Ng’s careful balance. That may be due to Ng’s careful distance; she’s said in interviews that she wanted the show to be its own thing, so she was sparing in her guidance. In any event, this show (which will run for eight episodes total; I’ve seen seven) lapses into flatness whenever it possibly can, and it is always very ready to tell you exactly who is right and who is wrong in any given situation. In the end, it all ends up feeling exhausting.

Little Fires Everywhere, like the novel, is set in the late ’90s. It begins when Mia arrives in the pristine and lily-white Cleveland suburb of Shaker Heights with her daughter, Pearl (Lexi Underwood). Mia’s a bohemian artist, and she spends her life traveling from town to town, enrolling Pearl in new school after new school as she looks for inspiration to fuel her work. In WASPy Shaker, where residents are expected never to let their manicured lawns grow taller than six inches high, a bohemian black single mother and artist like Mia is a curiosity.

Curious to the point of becoming enraptured is Elena, Shaker’s WASP queen and the one who usually measures the grass to make sure it’s up to spec. Elena’s a part-time reporter for the local daily, but she devotes most of her energy to running her household, making sure her husband (Joshua Jackson, doing “put upon”) and her four children are up to spec, too. She’s also Mia’s landlord, and she regards Mia’s life with condescending fascination: Being an artist, she breathes, sounds like “one of those ideal jobs you just see on TV, like a spy or a marine biologist.”

Elena also immediately covets Pearl, who she fears Mia is neglecting. Elena wants to play white savior, to enfold Pearl within the suffocating warmth of her own perfectly run household. And Pearl, who craves stability and comfort, initially has no objections to the idea of spending time at Elena’s. It’s Mia who objects to the interest Elena and her family take in Pearl, because Mia doesn’t trust them to have Pearl’s best interests at heart. So when Elena offers to make Mia her “household manager” — read: “maid” — Mia says yes. It will give her a chance to keep an eye on Pearl.

Elena’s own children, meanwhile, struggle to live up to their mother’s exacting expectations. The eldest two (Jordan Elsass and Jade Pettyjohn) are her golden children, but nerdy Moody (Gavin Lewis) and budding riot grrl Izzy (Megan Stott) whither under Elena’s obvious disappointment. And after Mia shows a casual interest in Izzy’s art, Izzy latches onto Mia immediately as a surrogate mother figure, much to Elena’s dismay.

The ensuing war of motherhood between Elena and Mia simmers quietly beneath the surface at first. But soon enough, it explodes into an overt proxy battle. Mia’s friend Bebe (Lu Huang), an undocumented Chinese immigrant, left her 2-month-old daughter at a fire station in the middle of winter when she was unable to provide food for her. Elena’s friend Linda (Rosemarie DeWitt) adopted the baby. Now Bebe wants her back.

In Ng’s book, the war over baby May Ling (per Bebe)/Mirabelle (per Linda) is where things get really interesting. Ng seeds the issue of the adopted baby elegantly into the background of the book early on, in the midst of cocktail party chatter and high school gossip, so it takes a while for it to dawn on you exactly how crucial the baby and the questions she inspires truly are: Her weight as a symbol of the argument Mia and Elena have been having all along about what makes a good mother creeps up on you, slowly and joyfully. And it gives Elena and Mia even more opportunities to be gently, subtly cutting toward one another.

But while watching the Hulu show, I realized the fight over the baby was going to be important when Mia snuck into the baby’s room during the baby’s first birthday party, cuddled her, and burst into tears as she cooed, “I know where your mommy is!” Then she went and told Bebe where the baby was, and Bebe immediately drove over to the house, marched in, and screamed, “SHE’S MY DAUGHTER!!!!”

One of these things, you will notice, is not like the other.

Because Little Fires Everywhere is that kind of adaptation: At every chance it has, it turns away from its source material’s subtlety and nuance in favor of amping the melodrama up to 11. And not fun, soapy melodrama like (that other Reese Witherspoon drama) Big Little Lies: melodrama that thinks it’s serious social issues drama.

Part of that turn toward the big and the simple means erasing the shades of gray in the way Elena and Mia interact. In the novel, neither protagonist is fully wrong or fully right. They’re both understandable enough to be sympathetic, and they also both make plenty of mistakes. But on the TV show, there is clearly a correct party and an incorrect party nearly every time Elena and Mia interact. And generally, Elena is the incorrect one.

Perhaps because Elena is now the clear villain of this story, Little Fires Everywhere doesn’t seem able to trust Witherspoon to convince viewers to appreciate or like Elena on her own strengths, even though watching Reese Witherspoon paste a sunny smile over a casually terrible statement is the deepest and purest pleasure Little Fires Everywhere has to offer. And so the series has grafted an unconvincing and unappealing new backstory onto her arc so that we’ll understand that Elena was not truly born terrible. She’s suffered a terrible disappointment (it’s boring) and so she’s had no choice but to become awful.

I won’t lie to you: In the midst of … all this … I found it sort of comforting to spend a day or so streaming Little Fires Everywhere and sending bitchy notes to my friends about the ways it was disappointing me. And certainly, if you are just feeling shell-shocked and stressed out and want to put something quietly mediocre onto the TV in front of you, this disappointing adaptation of a much better novel will absolutely do the job.

But we’ve got a whole backlog of peak TV out there, and so much of it is so much better than Little Fires Everywhere. I promise there are other options for you.

What Kobe Bryant’s death says about American memory
Trump still wants to get rid of the Affordable Care Act, even as Covid-19 rages
Inauguration week could turn violent, so Airbnb canceled all DC reservations
4 things to know about Australia’s contentious election
Code Commerce @ home
The 3 former cops who aided Derek Chauvin will also be charged with murder