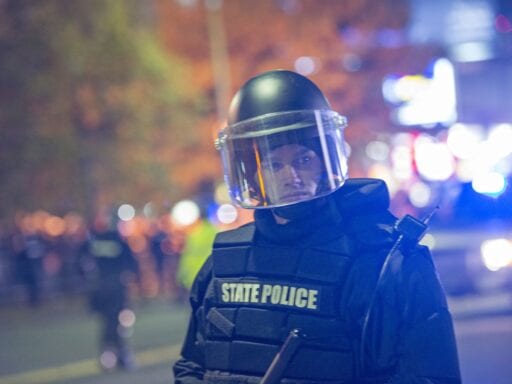 The Massachusetts State Police has allowed dozens of officers to remain on active duty after internal investigations found they had broken the law, a Boston Globe investigation uncovered.

The Globe’s Matt Rocheleau reviewed the Massachusetts State Police Department’s internal affairs files, and discovered that the force’s internal investigators had found “29 sustained charges for assault and battery; 19 alcohol and drug violations, including four OUIs; 17 charges for harassment, including three for sexual harassment; [and] another 17 for improperly using the state’s criminal background check system” against active troopers.

Despite those alleged criminal actions — and other alleged policy violations, like lying to internal investigators or judges and using excessive force — Rocheleau found that “the agency rarely fires troopers almost no matter what they have done.” And only a “handful” of the potentially criminal transgressions had been referred to prosecutors. In fact, the Massachusetts attorney general’s spokesperson told the Globe that “the State Police had shared none of those details with the office.”

The investigation reveals a growing consensus across the country that police officers aren’t facing appropriate consequences for intolerable behavior.

One officer, Trooper Paul Higgins, has committed dozens of crimes according to the Globe’s review of the police’s internal investigations. In 2013, he was told he could be fired for his “penchant for hanging out with and helping criminals” which had been “known to State Police leaders for years.” The conversation apparently had no effect, as Globe reporting reveals:

Despite that confrontation and warning, Higgins allegedly carried on. Two years later, the department received a letter from the US attorney’s office saying Higgins was the focus of a federal criminal investigation and had admitted to Drug Enforcement Administration agents that he ran background checks on behalf of drug-dealing bookies. In at least one case, records show, Higgins provided the background check information to let a criminal know that local police had run his license plate.

This pattern is not unique to Boston. The Mercury News reported that “more than 80 law enforcement officers working today in California are convicted criminals, with rap sheets that include everything from animal cruelty to manslaughter.” The Baltimore Sun reported on a case where a police officer was caught by his own body camera “placing drugs in a vacant lot and then acting as if he’d just discovered them” — he is still on the force. The Minnesota Star-Tribune reported that hundreds of police officers “convicted of criminal offenses in the past two decades … kept their state law enforcement licenses.”

Rocheleau’s reporting doesn’t zero in on the root causes of this culture of permissiveness, beyond deep flaws and ineffectiveness in the internal affairs investigative process, but Massachusetts police unions have loudly opposed proposed accountability measures.

Police unions also have a well-documented role in shielding their members from repercussions and making it very difficult to fire members. Vox’s Dylan Matthews has gone over the intense appeals process by which police officers are able to fend off accountability. That combined with rules like “giving officers a heads-up that they will be interviewed by internal affairs detectives or other investigators … about a case of potential wrongdoing” work to make it hard for even determined police departments to levy punishments on lawbreakers. Matthews reported on research suggesting unions are increasing violent misconduct:

University of Chicago Law School’s Dhammika Dharmapala, Richard McAdams, and John Rappaport looked at a 2003 Florida Supreme Court decision that gave collective bargaining rights to sheriffs’ deputies. They use police departments, which were unaffected, as a control group, and find that in the wake of the decision, misconduct violations rose in sheriff’s offices but not in police departments. That suggests that collective bargaining itself caused a rise in misconduct, perhaps by making sheriff’s deputies feel like they could get away with it.

Police unions, “under the duty of fair representation covered by the National Labor Relations Act and state laws,” are legally required “to give the best possible protections, including legal aid and support in job negotiations, to all their members” my colleague German Lopez has reported. That means police officers know they have strong legal representation waiting for them no matter what situation they get into, which some critics say has “helped build a culture in which police feel they can get away with nearly anything.”

In Massachusetts, officers appear to have reason to feel that way.

Report: Trump pressured Ukrainian president about 8 times to investigate Biden’s son
Trump’s rambling attacks on Mueller and Democrats at the Putin presser, annotated
Asian American communities grapple with whether police are the right answer to recent attacks
Joe Manchin opens the door to filibuster reform
The best books I read in 2019
Peter Brimelow, the white nationalist with close ties to the White House’s economic adviser, explain...