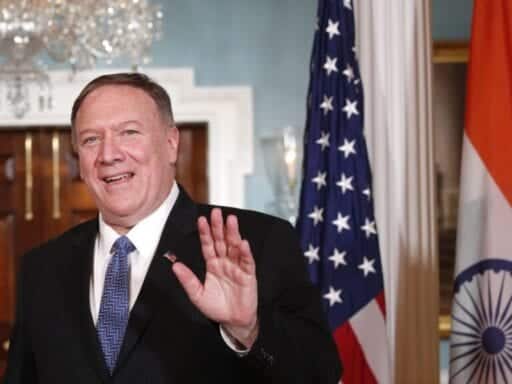 The Wall Street Journal reports that the secretary of state was on the call when Trump asked the Ukrainian president to investigate the Bidens.

Secretary of State Mike Pompeo reportedly listened in on the July 25 phone call between US President Donald Trump and Ukrainian President Volodymyr Zelensky — indicating that the State Department’s top official was aware of the president’s efforts to coerce a foreign leader to investigate Trump’s 2020 opponent.

The Wall Street Journal’s Courtney McBride first reported Pompeo’s involvement in the controversial call on Monday evening, citing a senior State Department official as the source of the information. Vox reached out to the State Department for comment but has not yet received a response at the time of writing.

The July 25 phone call between Trump and Zelensky is at the center of a burgeoning impeachment inquiry that began after an anonymous whistleblower filed a complaint alleging that the president attempted to use the power of his office to investigate a 2020 rival — specifically Joe Biden, and his son, Hunter. The White House released an incomplete transcript of the call last week that clearly shows the president asking Zelensky “for whatever you can do” about Biden’s case.

The whistleblower alleged in his complaint that approximately a dozen White House officials had listened to the call, but he named just one: T. Ulrich Brechbuhl, who serves as a top Pompeo aide. The State Department previously denied the allegation that Brechbuhl had listened in on that conversation.

Pompeo’s participation in the call is likely to intensify scrutiny of the State Department’s involvement in this Trump-Ukraine scandal — including how much the country’s top diplomats knew about what was going on and what their role was in the efforts of Trump’s personal attorney, Rudy Giuliani, to make contact with Ukrainian officials to get them to investigate Biden and his son.

After the release of the whistleblower report on Thursday, Pompeo said during a press conference that he hadn’t read it yet, even as he defended the role of his department.

“To the best of my knowledge, so from what I’ve seen so far, each of the actions that were undertaken by State Department officials was entirely appropriate and consistent with the objective that we’ve had certainly since this new government has come into office,” Pompeo told reporters in New York City.

“We have tried to use this opportunity to create a better relationship between the United States and Ukraine, to build on the opportunities, to tighten our relationship, to help end corruption in Ukraine,” he added.

In an earlier interview with ABC’s Martha Raddatz on September 22, Pompeo also feigned ignorance about the call between Zelensky and Trump. Neither the transcript nor the whistleblower complaint had been publicly released at this point, but Pompeo dismissed the allegation that Trump had improperly pressured Zelensky.

Raddatz asked whether it was appropriate for the president to ask a foreign leader to investigate a political opponent.

“I think I saw a statement from the Ukrainian foreign minister yesterday, said there was no pressure applied in the course of the conversation,” Pompeo said.

Raddatz then asked about potentially releasing the transcript. Pompeo replied: “Those are private conversations between world leaders, and it wouldn’t be appropriate to do so, except in the most extreme circumstances. There’s no evidence that that would be appropriate here at this point.”

“You just gave me a report… none of which I’ve seen,” Secretary of State Mike Pompeo tells @martharaddatz when asked about a report that President Trump pressed the President of Ukraine to work with Rudy Giuliani to investigate Joe Biden’s son. https://t.co/CaWsz4XapY pic.twitter.com/coDl6mG6Dy

The State Department is a big unknown in the Ukraine scandal

Pompeo’s presence on the call is likely to fuel even more questions about what the heck the State Department was doing.

The whistleblower in his complaint that alleged that US envoy to Ukraine Kurt Volker, and US ambassador to the European Union Gordon Sondland had met with Zelensky the day after Trump’s July 25 call to help the new Ukrainian government “navigate” Trump’s request. That certainly makes like it sound as if the administration officials were backing up the president’s pressure. (Volker resigned on Friday.)

Yet, later in the whistleblower complaint, the individual says that, in the starting in mid-May he heard that Volker, Sondland, and other State Department officials had spoken to Giuliani to “contain the damage” to national security, and also met with the new Ukrainian administration to respond to the “differing messages” it was receiving from official channels, such as the State Department, and the unofficial, in Giuliani.

These are somewhat competing narratives — a State Department trying to limit the fallout from Giuliani’s freelancing, and another that’s prepared to act as backup to the president.

The story gets even more complicated, after Giuliani went on a media tour last week to argue that he was acting at the behest of the State Department, and brought text messages to prove it.

“Mr Mayor — really enjoyed breakfast this morning. As discussed, connecting you here with Andrey Yermak, who is very close to President Zelensky,” a text purportedly from Volker to Giuliani dated July 19 said. “I suggest we schedule a call together on Monday.”

The allegations about Volker in the whistleblower complaint haven’t been verified yet, and Volker hasn’t spoken publicly since his abrupt departure on Friday. But those messages suggested a broader knowledge of Giuliani’s efforts within State. Giuliani also said Sunday on CBS’s Face the Nation that Pompeo was “aware” of his outreach efforts to Ukrainian officials.

How much Pompeo knew — and what he may have done after the July 25 call — is likely to open another front for the House Democrats’ impeachment inquiry.

Death toll from 7.0 earthquake near Greece and Turkey rises to over 80
Trump faces a new allegation of sexually assaulting a woman at Mar-a-Lago
Trump administration and Pfizer work on deal for tens of millions more Covid-19 vaccines
Why protests around the world often involve public transportation
More than half of House Democrats now support opening an impeachment inquiry against Trump
Trump’s demand for $2,000 stimulus checks is blocked by his own party