Retailers are pushing sales before the election 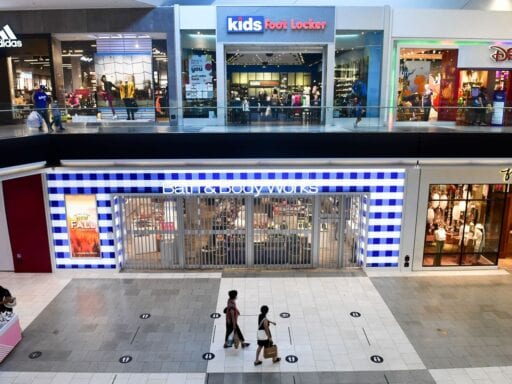 Share
Loading...
It’s been a tough year for retail, and stores are hoping you’ll buy despite the election. | Frederic J. Brown/AFP via Getty Images

Like the rest of us, brands don’t know what the world will look like on November 4. They still need to meet their sales goals.

In a normal year, a holiday marketing email landing in my inbox the first week of October would have been cause for an immediate “unsubscribe.” In 2020, though, the premature arrival of festive cheer and seasonal discounts hardly registered as unusual — coming, as it did, after months in which my experience of time seemed to bear little connection to my calendar.

Brands that might otherwise wait until mid-November to start pushing out holiday promotions had plenty of reasons for getting a head start, most of them related to the Covid-19 pandemic: reducing last-minute crowds, capitalizing on the momentum from Amazon’s months-delayed Prime Day, and accounting for shipping delays caused by the expected flood of online orders.

The wild card that marketers say has been at the top of all of their minds, though, is the upcoming US presidential election, a single day in November that could very well monopolize the country’s attention long past the closing of the polls.

How do you get customers excited about your new air fryer or eyeshadow palette when they’re worried about the future of democracy?

The coming weeks will be a test of what happens when the holiday shopping bonanza collides with one of the most fraught political events in recent history. How do you get customers excited about your new air fryer or eyeshadow palette when they’re worried about the future of democracy? How soon is too soon to advertise a sale once the polls close?

Just as America’s top political strategists are currently mapping out different election outcomes — a landslide victory for either side, a contested race that takes weeks to call due to record numbers of mail-in ballots, civil unrest stoked by President Trump’s unfounded cries of voter fraud — brands are creating contingency plans for how and when they’ll be able to sell you stuff again.

Vickie Segar, the founder of Village Marketing, an influencer marketing agency, says she’s advised her clients to scale back significantly during the first couple of weeks of November. She wants to make sure they don’t get caught in the same situation many did four years ago, having to redo campaigns that audiences never saw.

“During the election in 2016, we assumed there would be a couple of days where we would go dark on media,” she recalls. Instead, Trump’s win sent the country reeling, keeping audiences’ attention on national political news rather than shopping or lifestyle content.

In the past two presidential cycles, consumer spending dropped 6 percent year over year during the week of the election, according to Epsilon’s Abacus database.

Those clicks and dollars did bounce back, but not until at least a week after the election, Segar says — and this year, with the likelihood of contested results and the concurrent threat of the pandemic, the outlook is even more uncertain. “It’s like a perfect storm,” says Segar, whose agency is also working with Joe Biden’s campaign to reach young voters on social media. “We just have to be prepared.”

For some companies, this means preparing for business disruptions: Maggie Merklin, executive vice president at Analytic Partners, a marketing analytics company, says one client, a restaurant group, anticipates another lockdown if Biden wins the election and is planning out scenarios for national or statewide closures. The CEO of ServiceChannel, a facilities management company that works with gyms, retailers, and other businesses, told the Wall Street Journal that hundreds of its clients have plywood and contractors ready to mobilize in case of protests and civil unrest.

However, for other brands, this preparation has as much to do with the messaging they’ll put out. In the lead-up to the election, many brands have thrown their weight behind voter turnout efforts: Fashion labels have released “vote” merchandise, ride-sharing apps have offered free or discounted transportation to the polls, and companies of all persuasions have used their email lists, Instagram feeds, and celebrity ambassadors to encourage customers to do their civic duty.

This kind of bipartisan message is a relatively safe way to get involved in the national conversation. According to a recent Morning Consult poll, 59 percent of Americans believe corporations should use their influence to ensure safe and fair elections. Picking a side — or being perceived to pick one — is riskier, with 52 percent of respondents saying companies shouldn’t be involved in getting politicians elected.

Jennifer Bett Meyer, president and founder of the media relations agency Jennifer Bett Communications, says she has encouraged the brands she works with to be outspoken. “I don’t think it’s enough to just pause a marketing campaign because you’re afraid that you’re not going to get attention because there’s going to be so much attention on the election. I think it’s every brand’s responsibility to become part of that process and to speak up about what’s going on.”

Of course, some companies have a more natural entry to do so than others: Tia, a women’s health startup and a JBC client, published an open letter to the future president about what women want for health care in America, based on the results of a September survey of 900 women.

But even those that sell CBD drinks or cashmere sweaters will have to enter the fray eventually post-election. “Brands need to launch. People can’t stand still,” says Bett Meyer, adding that the holiday season is a crucial one for many of the startups and small brands with whom the agency works. “I think it always comes back to the messaging … it’s unbelievably important that brands are looking at their external messaging, whether that’s an email blast or a social media post or a sale, to make sure that it reflects the current landscape.”

Their ability to read the room can make or break consumers’ trust, as we witnessed this summer with brands’ at-times-haphazard attempts to weigh in on the Black Lives Matter movement. While people called out companies for empty pronouncements and black-square Instagram posts that contradicted their internal policies and practices, not posting was also a statement in itself — one that even many apolitical companies wanted to avoid.

“I can’t tell you how many brands were like, ‘We are not going to comment on Black Lives Matter.’ And then all of a sudden, they were like, ‘We need to comment on Black Lives Matter,’” says Carrie Kerpen, the co-founder and CEO of Likeable Media, a digital agency. With the election, she says, brands have to be prepared to shift their messaging and timing based on the outcome. “There’s no guidebook that says, ‘You wait five days, and then post.’ … The overused word of the century is ‘unprecedented,’ but it is. We don’t know. So you have to go with a little bit of gut.”

What consumers see (and don’t see) in the coming weeks will also be determined by ad platforms themselves: Facebook has banned new political ads in the week before the election and for an indefinite period after polls close, while Google will implement a post-election political ad ban expected to last at least a week. The two tech giants — which together control nearly 70 percent of the digital ad market — are making a public show of cracking down on misinformation (though how effective this will be amid all the lies that go viral for free is debatable). In doing so, says Kerpen, Facebook has begun labeling nearly all ads that even remotely touch on “social good” as “political” — so brands won’t be able to create ads that tread near these subjects until after the platform lifts the ban.

Advertising on virtually any channel is also more expensive around the election. Kantar, a consulting and research firm, estimates that political advertisers will spend $7 billion this election cycle, driving up costs and monopolizing prime spots on television, digital, and radio. On Facebook, ad prices were already surging before the election, with costs per 1,000 impressions (CPMs) up 23 percent between July and September, according to digital ad company Revealbot. On YouTube, Bloomberg reports, the deluge of pre-election political ads is outpacing the number of slots available in front of certain audiences, pricing out even some campaigns.

For some brands, the October early holiday push comes back to the pandemic for another reason: They pulled back aggressively on their marketing spending in the spring, when mass unemployment and shuttered stores meant few consumers were shopping. According to Kantar, US media spending was down 19 percent in the first half of 2020 compared to the same period last year. Now that some sectors have stabilized, these companies have extra budget to spend — and with the looming threat of political upheaval, they’re under pressure to meet sales goals.

Merklin says many of her clients are directing these dollars at email marketing and other channels targeting existing customers for the weeks around November 3. “So they’re still advertising during the election, but on more of a targeted or a personalized level because they can do that a little bit more safely than just throwing out an ad on Facebook and not knowing what it’s going to be next to and in what context it might be observed,” she says.

Brands, they’re just like us: They have no idea what happens next.

How Netflix’s The Haunting of Hill House uses color to underscore its horror
Pop culture unites us as Americans. Will streaming services change that?
One Good Thing: Netflix’s Dash & Lily is a sweet TV rom-com with a Christmas twist
Trump’s 2020 kickoff made it seem as though he’s still running against Hillary Clinton
Quarantine frugality is different from traditional thriftiness
Why Democrats are holding out for more comprehensive stimulus