Roger Stone was just found guilty on all counts 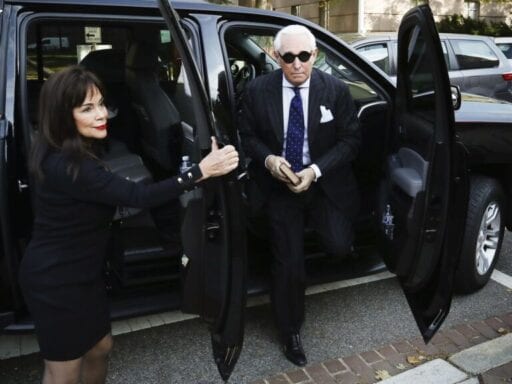 Stone’s trial was the highest-profile loose end remaining from the Mueller investigation.

The verdict is in for Roger Stone’s trial — and a Washington, DC, jury found President Donald Trump’s longtime political adviser guilty on all counts Friday.

Stone was convicted of one count of obstructing an official proceeding, five counts of making false statements to Congress, and one count of witness tampering.

The verdict makes Stone the sixth former Trump adviser to be convicted of or plead guilty to charges stemming from special counsel Robert Mueller’s investigation. The special counsel indicted Stone in January, before completing his work, and Stone’s trial was the highest-profile loose end remaining from the probe.

Prosecutors alleged that Stone tried to obstruct the House Intelligence Committee’s investigation of Russian interference in the 2016 election by lying to the committee about his efforts to contact WikiLeaks, and by encouraging another witness to lie for him.

The trial featured testimony from two other former top Trump campaign aides — Steve Bannon and Rick Gates. Both said that Stone repeatedly suggested he had inside information on WikiLeaks’s plans to release material that would be damaging to Hillary Clinton.

Gates gave testimony suggesting that Stone shared this information with Donald Trump himself. And Trump’s name came up frequently in the trial — prosecutor Aaron Zelinsky argued that Stone’s motivation for his lies and obstruction was that “the truth looked bad for Donald Trump.”

But what wasn’t really cleared up in the trial was whether Stone in fact had legitimate inside information about WikiLeaks and its posting of Democratic emails that had been hacked by Russian intelligence officers. To an extent, that makes sense — the charges against Stone weren’t about anything he did in 2016, but rather the alleged cover-up he perpetrated the following year.

The government presented voluminous documentary evidence that the story Stone told Congress — that all his WikiLeaks information came from a single “intermediary,” radio host Randy Credico — was false. And they suggested Stone concocted this false story to hide his true WikiLeaks connection — conservative author Jerome Corsi. But what, exactly, Corsi learned, and how he learned it, remain murky.

Stone, however, has now been convicted, and will be sentenced at some point in the coming months by Judge Amy Berman Jackson. He will likely try to appeal his case — and hope President Trump pardons him — but, as of right now, it looks like the legendary dirty trickster may well serve prison time.

The timeline of Stone and WikiLeaks

It was all the way back in spring 2016 that Stone began saying he knew that WikiLeaks had information coming that would damage Clinton, according to both Bannon (testifying under subpoena) and Gates (testifying as part of a plea deal he struck with the government).

Back then, Gates was the deputy Trump campaign chair, serving under his longtime boss Paul Manafort. Gates testified that he and Manafort were initially skeptical that Stone really knew what he was talking about.

But then, on June 12, 2016, WikiLeaks founder Julian Assange announced that he had pending releases related to Clinton. Two days later, on June 14, the Democratic National Committee announced it had been hacked by the Russian government.

At the trial, the government revealed that Stone had called and spoken with Trump that same day (though it’s unclear what they discussed). Gates also testified that, the following day, Stone told him that more information was coming soon.

A little over a month later, on July 22, WikiLeaks posted the hacked DNC emails online. Gates testified that Trump campaign chair Paul Manafort then instructed him to keep in touch with Stone and find out what else he knew about WikiLeaks’s plans — so Trump could be briefed on them. On July 25, Stone emailed his associate Jerome Corsi, telling him to “get to Assange” and “get the pending WL [WikiLeaks] emails.”

Gates also testified that he witnessed a phone call between Trump and Stone in late July, while Gates was in a car with Trump driving to LaGuardia Airport. Gates said that he could not hear exactly what was said on the call but that after the call ended, Trump told him that “more information would be coming.” About an hour after the call, Stone emailed Corsi again, to say a friend of theirs in London should see Assange.

A few days later, on August 2, Corsi emailed Stone about what he said were Assange’s plans, and vaguely mentioned “Podesta” — a reference to John Podesta, Hillary Clinton’s campaign chair. (Podesta’s emails had been hacked, but that was not public knowledge at this point.) The next day, Stone emailed Manafort saying he had an idea “to save Trump’s ass.”

Manafort was ousted from the Trump campaign in mid-August, and replaced by Bannon. Stone then emailed Bannon on August 18, saying he knew a way to win the 2016 election, but that “it ain’t pretty.” Bannon testified that afterward, Stone continued to suggest privately that he had a “relationship with WikiLeaks and Julian Assange.” Bannon added that the Trump campaign didn’t really have an official access point to WikiLeaks — but that the closest thing to that would have been Roger Stone.

Still, despite all of Stone’s ominous predictions, no one at the trial testified that Stone ever offered specific knowledge of WikiLeaks’s plans on timing or that he specified what information, exactly, they had in advance.

In any case, none of that was actually the focus of the charges against Stone.

The charges were about Stone’s alleged cover up

The government alleged that when the House Intelligence Committee asked him to testify in their Russia investigation in 2017, Stone concocted a false cover story to hide whatever actually happened.

Specifically, Stone omitted Jerome Corsi from the story, and claimed all of his information about WikiLeaks came from comedian and radio host Randy Credico. But, as prosecutors argued and Credico himself testified, that didn’t make sense with the timeline.

Credico did get in touch with WikiLeaks to do a radio interview with Assange, but that wasn’t until late August 2016 — months after Stone started claiming to know about WikiLeaks, and weeks after his emails with Corsi.

The fuller story of what happened with Stone and WikiLeaks remains unclear — but Mueller’s own conclusions are already in his 448-page final report on the Russia investigation, hidden under black bars.

That’s because all material about Stone in the Mueller report was redacted, to avoid prejudicing this trial’s outcome. Now that it’s over, we’re finally getting closer to learning what the special counsel found — and whether he thought any Trump associates were involved in the dissemination of hacked emails.

So your kid is a bully. Here’s how to stop it.
Study suggests Democrats should be running more ads about Biden, fewer about Trump
The insidious cultural history of Kanye West’s slavery comments
Arkansas is the latest state to ban calling veggie burgers “veggie burgers”
Read: US indicts 7 Russian spies for hacking related to Olympic doping scandal
Alexander Vindman, a key impeachment witness, will be transferred out of the White House