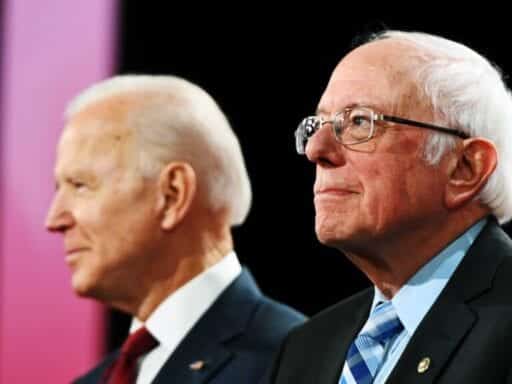 During Thursday’s Democratic debate, former Vice President Joe Biden and Sen. Bernie Sanders were confronted with statements recently made by former President Barack Obama about gender. And both of them missed a major opportunity.

At a recent event on leadership in Singapore, Obama made two points. He argued that women are “indisputably” better leaders than men and he said that individuals, “usually old men,” need to recognize when they should step aside to enable new ideas and leadership to flourish, BBC reports.

Seeing as they’re two old white men, and ones who Obama may have been referring to with his comments, Biden and Sanders were asked for their responses. And both took it as a chance to tout their own policy priorities, rather than focusing on the central thesis of the former president’s point: that promoting inclusion and underrepresented perspectives can strengthen the type of leadership countries experience.

“I got a lot of respect for Barack Obama. I think I disagree with him on this point. Maybe a little self-serving, but I do disagree,” Sanders said, responding directly to his statement about “old men” needing to make way for other voices.

He went on to say that economic inequality was the main driver of power imbalances in the US — but only did so by skirting how race and gender exacerbate these disparities. Sanders’s singular framing of this issue has been criticized in the past for failing to emphasize how these dynamics intersect with systemic racism and sexism.

“The issue is where power resides in America, and it’s not white or black or male or female,” Sanders said. “We are living in a nation increasingly becoming an oligarchy, where you have millionaires buying elections and politicians.”

Biden, too, didn’t fare much better. He also centered his response on himself and the expertise that he has to offer for the role.

“I’m going to guess he wasn’t talking about me either,” Biden said. “I‘m running because I’ve been around on my experience. With my experience comes judgment and a little bit of wisdom.”

Their responses were disappointing, if not entirely unsurprising. When faced with the fact the old white men have historically held power, both candidates chose to deflect from it and highlight their own strengths, rather than acknowledge the need for a broader range of perspectives in leadership.

It wasn’t until Sens. Amy Klobuchar and Elizabeth Warren, the only two women on the debate stage, responded to the question that they spoke to the need for more representation.

“I explained in the history of the Senate there was something like 2,000 men and only 50 women in the whole history,” Klobuchar said, citing a joke that Comedy Central host Trevor Noah once made about the gender gap in Congress. “He said if a nightclub had numbers that bad, they would shut it down.”

And Warren went on to more directly emphasize how Obama’s statements called out the importance of bolstering people who have not historically been leaders in executive office, including women in the US.

Obama’s original statements lay out the advantages he saw in having more women leaders, who are still vastly underrepresented around the globe. “I’m absolutely confident that for two years if every nation on earth was run by women, you would see a significant improvement across the board on just about everything … living standards and outcomes,” he said last week.

The leadership positions of many nations on Earth are, in fact, not currently held by women. As of 2016, just 67 of 144 countries around the world had had a woman as a prime minister or president in the last 50 years, according to a World Economic Forum study.

The US isn’t one of them. In its more than 220-year history, the country still has yet to elect a woman president. Warren explicitly highlighted this fact when a moderator told her that she’d be the oldest person ever inaugurated if she were to take office.

“I’d also be the youngest woman ever inaugurated,” she said.

Who is winning the March 17 delegate count so far
Photos: Uprisings across America over George Floyd’s death
Trump used his latest coronavirus briefing to push a bizarre lie about the deficit
Is the pandemic making people more generous — or more selfish?
Hog manure is spilling out of lagoons because of Hurricane Florence’s floods
Trump: “Tariffs are the greatest”; also farmers need $12 billion in aid because of tariffs