This former governor pardoned a man convicted of raping a child. His reasoning was deeply flawed. 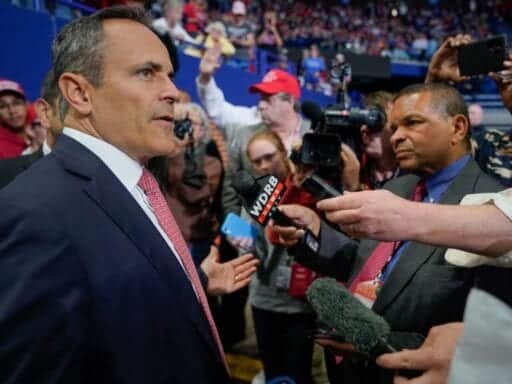 Share
Loading...
Matt Bevin, then governor of Kentucky, speaks with the media prior to a campaign rally for President Donald Trump on November 4, 2019 in Lexington, Kentucky. | Bryan Woolston/Getty Images

It could keep survivors from coming forward.

Before he left office, former Kentucky Gov. Matt Bevin pardoned not one, but several men convicted of sexually abusing minors.

And on Thursday, he defended one of these pardons by sharing intimate details about a child’s anatomy.

Bevin pardoned Micah Schoettle, now 41, who had been convicted of raping a 9-year-old girl. The reason for the pardon, Bevin said, is that the girl’s hymen was intact.

“If you have been repeatedly sexually violated as a small child by an adult, there are going to be repercussions of that physically and medically,” Bevin said in a local radio interview, according to the Louisville Courier Journal.

But experts say that an intact hymen is in no way evidence that a child has not been raped; one study found that just over 2 percent of survivors in child rape cases had visible damage to the hymen, the Courier Journal reports. Moreover, the former governor was publicly talking about a minor’s sexual organs as a way to discredit her testimony about her sexual assault.

Bevin was already facing heavy criticism for the hundreds of pardons he issued in the last days of his term, including at least two other men convicted of sexual abuse of children. The pardons are part of a complex legacy on criminal justice issues, including an effort to reduce the number of people incarcerated in Kentucky, as Vox’s Casey Quinlan explains. But in the case of Schoettle’s pardon, Bevin appears to have misunderstood the law and science of sexual abuse — and his words play into stigma and misinformation around hymens and sexual activity that could keep survivors from coming forward about their assaults.

Bevin’s defense of the pardon is medically inaccurate

Bevin, who left office earlier this month, was asked about Schoettle’s case in an interview with the radio station WHAS.

“There was zero evidence,” he said, according to Alfred Miller and Joe Sonka at the Courier Journal.

He said that the survivor’s sister was present when the 9-year-old said the assaults occurred, and denied that they happened.

“Both their hymens were intact,” he went on.

But his claim that an intact hymen means no assault occurred is completely wrong, Dr. George Nichols, former chief medical examiner for the state of Kentucky, told the Courier Journal.

“Rape is not proved by hymen penetration,” he said, adding that Bevin “not only doesn’t know the law, in my humble opinion, he clearly doesn’t know medicine and anatomy.”

The prosecutor in the case, Kenton County Commonwealth’s Attorney Rob Sanders, has asked for an investigation into the pardon, the Courier Journal reported.

“Even the defense experts testified they would not expect to find an injury in the victim’s sexual assault exam,” he told the paper. “This was the subject of an eight-hour court hearing Matt Bevin obviously never watched.”

He has pardoned multiple people convicted of sexually assaulting minors

But Schoettle is only one of the men convicted of child sexual abuse that Bevin pardoned. In fact, he was initially confused when his interviewer brought up the subject of a child rape case.

“Which one, though? Because there were a couple of people that were accused of that whose sentences I commuted.”

In Hurt’s case, Bevin cited the fact that in 2015, Hurt’s stepdaughter, whose name has not been made public, recanted her allegations. However, several judges declined to set aside Hurt’s conviction, the Courier-Journal reported, in part because of the role of Jefferson Circuit Judge Stephen Mershon in the recantation. Mershon presided over Hurt’s original conviction in 2001, but later began corresponding with Hurt and also contacted the stepdaughter.

In 2016, one judge said that Mershon had “altered” the stepdaughter’s memory and used “judicial coercion and intimidation” to get her to recant. After Hurt’s pardon, Mershon was the one to pick him up from prison.

These and other pardons have led Democrats and Republicans alike to criticize Bevin, with Senate Majority Leader Mitch McConnell calling them “completely inappropriate.”

The pardons are “a controversial capstone” to a governorship that focused on criminal justice issues, Vox’s Quinlan writes. Bevin aimed to stop the growth of Kentucky’s prison population, but it didn’t work — a reform bill backed by the governor failed, and there were more people in prison in the state in 2015 than before he took office.

Instead of reducing his state’s incarcerated population, Bevin has succeeded in spreading misinformation about sexual assault and human anatomy. The idea of “testing” a person’s hymen for evidence of sexual activity has been a topic of widespread public discussion since the rapper T.I. said he has a doctor check his daughter’s hymen once a year. But experts say that the absence of a hymen does not mean someone has been sexually active.

And, as the Kentucky medical examiner noted, the presence of a hymen does not prove that someone was never sexually assaulted. By making his inaccurate comments, Bevin may have discouraged sexual assault survivors from coming forward, for fear that they won’t “pass” some sort of physical test.

He is no longer in office to continue making criminal-justice decisions in the state of Kentucky. But his words and their impact could linger long after his term is over.

Chris Collins drops reelection bid after being charged with insider trading
Mike Pence is officially part of the Trump impeachment investigation
What should the media learn from the coronavirus?
The CDC now recommends everyone use cloth masks in public
Senate Democrats broadly shut down Republican trolling on the Green New Deal
The MyPillow Guy, explained by someone who read his memoir