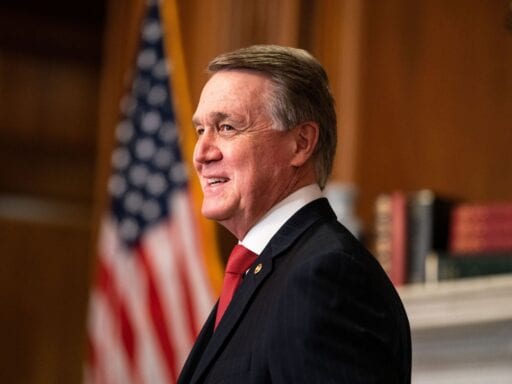 Sen. David Perdue (R-GA) — in an attempt to gin up the crowd at President Donald Trump’s rally in Macon, Georgia, on Friday — took the opportunity to mock Sen. Kamala Harris’s name.

“The most insidious thing that Chuck Schumer and Joe Biden are trying to perpetrate, and Bernie, and Elizabeth, and KAH-mah-la, or Kah-MAH-la, or KAH-mah-la or Kamala-mala-mala, I don’t know, whatever,” he said.

It’s a move that was blatantly racist, and one that framed Harris — who is the first Black woman and first South Asian American woman to be a major party vice presidential nominee — as someone who’s different.

A Perdue spokesperson pushed back on this interpretation after the senator received extensive blowback for his actions. “Senator Perdue simply mispronounced Senator Harris’ name, and he didn’t mean anything by it,” said Perdue’s campaign communications director, John Burke, in a tweet.

Perdue’s behavior, however, was all too familiar for many people of color who recognized his attempts to “other” Harris because she has a name that may be less common than his, or more difficult to pronounce. As BuzzFeed News’s Clarissa-Jan Lim reported, Twitter users began using the hashtag #MyNameIs to share their names and the meanings behind them, emphasizing that pronouncing them correctly was simply a “basic form of respect.”

“#MyNameIs is giving me life. Your name is the prayer your parents breathe into you. It is a promise, a hope, and a gift,” wrote NAACP Legal Defense Fund President Sherrilyn Ifill. “It should be respected.”

Perdue’s actions, ultimately, were very much in line with Trump’s own rhetoric about immigrants and people of color. Among other things, Trump has described asylum seekers as an “invasion,” called Black Lives Matter protesters “thugs,” and told progressive congresswomen of color that they should “go back” and “fix the … places from which they came.” Trump also recently declined to condemn white supremacists, instead telling the Proud Boys, a far-right hate group, to “stand back and stand by.”

Perdue’s statement also mirrors the way the president has made light of Harris’s name in recent weeks, including at rallies.

Trump mispronounces Kamala Harris’s name, which he repeats numerous times like it’s an incantation or something pic.twitter.com/CUtgyKe8QW

It was the president Perdue was echoing in his attempt to demean Harris — one of his Senate colleagues for the last four years — and to denigrate her candidacy.

He’s also far from the only one who’s used this tactic in a way to undercut Harris. Earlier this year, Fox News anchor Tucker Carlson mispronounced her name as well and bristled when a guest urged him to correct it. “Out of respect, for somebody who’s going to be on the national ticket, pronouncing her name right is actually kind of a bare minimum,” Democratic strategist Richard Goodstein said at the time.

Making fun of the way someone’s name sounds or is pronounced has been a longstanding way to “other” someone and disrespect their identity, sending a clear message about how little effort a person is willing to put in to treat someone else with dignity. As a KUOW public radio report noted, research done by Rita Kohli and Daniel Solórzano at the University of California found that, in school settings, the mispronunciation of names creates feelings of “anxiety and alienation” — as well as pressure for people to adapt their names and conform to expectations that others may set for them.

Perdue’s actions have since garnered swift backlash: Following his appearance at the rally, Perdue’s Democratic Senate competitor, Jon Ossoff, who criticized his statements as “bigoted mockery,” has raised $1 million, according to his campaign.

Ossoff and Perdue are locked in a tight race, with the RealClearPolitics polling average showing the two within 1 percentage point of one another, and Cook Political Report rating the race as a “Toss Up,” meaning each is looking for ways to gain a late advantage. In making fun of Harris’s name, Perdue appears to have given his opponent a fundraising victory, while unnecessarily creating a an embarrassing situation for himself.