Senate Republicans were never going to vote for witnesses 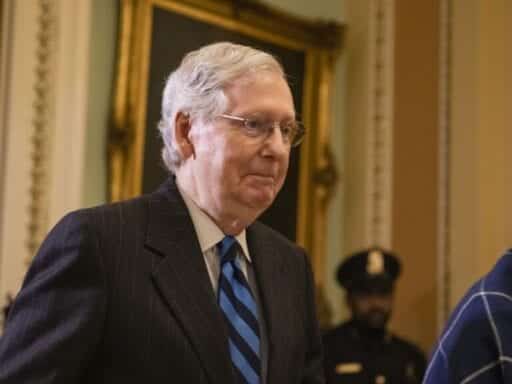 They made up their minds a long time ago.

In the past week, there’s been a lot of speculation — and anticipation — about how Senate Republicans would vote, when it came to calling more witnesses for the Senate impeachment trial. The hype obscured just how predetermined the outcome really was.

Of course, the recent attention was in some ways warranted, given the bombshell from former National Security Adviser John Bolton, who said that President Donald Trump had explicitly told him about a quid pro quo between military aid to Ukraine and political investigations, according to his book manuscript. Trump’s defense lawyers, up to this point, have repeatedly pointed to the need for a direct witness who had heard about the alleged quid pro quo from the president himself — and Bolton seemed ready to provide just that.

But this narrative belied the one constant throughout this trial, even as new evidence has flowed in to bolster the facts: Republicans’ loyalty to Trump.

The vote on Friday against calling more witnesses thoroughly captures this dynamic. It’s the result that matches up most closely with what Senate Republicans have been saying all along.

Senate Majority Leader Mitch McConnell, after all, has long made his priorities clear: He wanted a quick trial, and he didn’t want any witnesses. Plus, he said, he was making this plan in lockstep with the White House.

“There’ll be no difference between the president’s position and our position as to how to handle this,” McConnell said during a Fox News appearance in December.

McConnell’s statement captures how the Republican conference has reacted throughout this trial, including even some closely watched swing-vote senators. First, Democrats’ arguments were too “boring,” then there wasn’t enough information to demonstrate a quid pro quo, and finally — even if Trump committed these offenses, they weren’t serious enough to warrant impeachment.

It’s worth noting that this last argument is one that some Democrats made during President Bill Clinton’s trial as well, though those proceedings did include witness testimony.

Senate Republicans’ decision to vote against witnesses feels shocking given that historical precedent, and in light of the new information that’s been presented this week. But when examining how they’ve handled these proceedings — and countless other Trump clashes, it isn’t surprising at all.

Republicans’ loyalty in the trial echoes numerous instances when they have declined to break with Trump since he’s taken office, largely because he’s still so popular with the Republican base. According to a recent Gallup poll, 89 percent of Republicans approved of the job he was doing as president.

Last year, Sen. Thom Tillis (R-NC) experienced what happens when a Republican defies the president: After writing a Washington Post op-ed opposing the national emergency Trump had declared to obtain funds for his border wall, Tillis was threatened with a primary challenge, and quickly reversed course. Others that have spoken out against Trump in the past, like Alabama Rep. Martha Roby and former South Carolina Rep. Mark Sanford, have paid the price at the ballot box.

On issues as varied as Trump’s xenophobic comments about House lawmakers and the president’s implementation of a travel ban, Republicans have balked at opposing Trump despite vast public backlash. They’ve approved judges who’ve been deemed “unqualified” by the American Bar Association, and they’ve confirmed a Supreme Court justice who faced allegations of sexual assault.

Friday’s witness vote was just the latest example of them continuing to do the same.

5 questions for Attorney General William Barr on the Ukraine scandal
6 months after a major public controversy, YouTube is changing its anti-harassment policies
Your smart devices listening to you, explained
When is the first presidential debate? September 29.
Mike Pence visited the Mayo Clinic without a mask, violating his own government’s guidance
Joe Biden wins the Arizona primary