Simone Biles is the greatest female gymnast ever 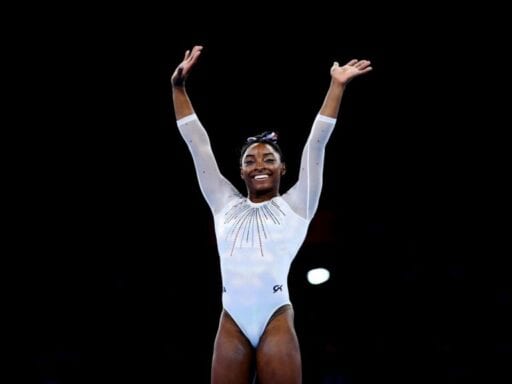 With another world title, Biles is now in a class of her own.

It is extremely difficult to quantify “greatness” in a sport where generally, female athletes may only compete for two to five years before retirement.

Consider the female gymnast third on the list for most World Championship medals won by a woman, Romanian Gina Gogean, who finished her career with nine medals.

She competed at five world championships between 1993 and 1998, winning a silver medal in the all-around competition — which features all four events in which female athletes compete (bar, beam, floor exercise, and vault) — in 1993.

In contrast, Simone Biles has won the gold medal in the all-around competition at the World Championships every single year in which she’s competed since 2013 (the championships were not held in 2016 due to the Olympics, and Biles took the 2017 season off to recover from the Games). In fact, she has not lost an all-around competition in which she has competed since 2013.

Simone Biles is so good — no, so great — that at this year’s World Championships, she surpassed the margin of victory she achieved in 2018, beating the silver medalist, Tang Xijing, by more than 2.1 points — the largest margin of victory at a world championship competition since the current Code of Points came into use in 2006.

During her floor exercise routine, Biles stepped out of bounds twice (a penalty), but still won the floor competition by more than a point.

She is so good, in fact, that she is now being penalized by the FIG Women’s Technical Committee — the body in charge of deciding what points athletes will receive for performing certain skills — for, in effect, being too good.

For example, Biles’s balance beam dismount — a double twisting double back (two flips, two twists) — is the most difficult beam dismount being competed. It’s so difficult that the same skill is generally only done on floor, where padding and springs can protect athletes who attempt it.

But as the New York Times’s Liriel Higa detailed:

… the international gymnastics federation last week deemed the Biles dismount a mere “H” skill, the same value as on floor. It also valued it at only one tenth higher than the much easier (though still incredibly difficult for the rest of the world) full twisting double back, which is two flips and one twist. That move is classified as a “G” skill on beam, but only an “E” on floor.

To which Biles responded:

The reason? According to the FIG Women’s Technical Committee, that dismount is so difficult that athletes should, in short, be discouraged by the FIG from doing it by lowering its potential scoring value. In its statement, the FIG even compared that dismount to the infamous Thomas Salto, banned from women’s competition after an athlete was paralyzed attempting it in 1980:

The direction of the FIG for the past two Olympic cycles has been to encourage the perfect execution and beautiful artistic performance, while continuing the development of the skills.

With this in mind, the WTC has assigned a “reasonable” difficulty value to the dismount, reflecting on these many aspects.

There is added risk in landing of double saltos for Beam dismounts (with/without twists), including a potential landing on the neck.

Reinforcing, there are many examples in the Code where decisions have been made to protect the gymnasts and preserve the direction of the discipline.

The WTC’s task is to ensure the safety of all athletes around the world and decisions are not based purely on one gymnast.

That’s how good Simone Biles is — the international body that determines the scoring for the sport thinks that her moves are so difficult other gymnasts shouldn’t risk trying them.

As Biles told NBC Sports, “If it were [a gymnast from] another country trying it, it would definitely be a J. But because it’s me. It’s so unfair, because, am I in a league of my own? Yes, but that doesn’t mean you can’t credit me for what I’m doing.”

Biles is so great that she is pushing the entire United States’ team to get better. After she debuted a triple-double on floor at the 2019 US National Championships — a feat never before landed in competition by a female athlete — her teammate, Jade Carey, posted video of herself attempting the maneuver in her gym just nine days later.

With Biles and Carey’s help, the US women’s team won its fifth consecutive world championship title earlier this week. That marks a string of dominance in international competition, including the Olympics (where the women’s team won gold in both 2012 and 2016), not seen since the fall of the Soviet Union.

When I was working at MTV News, I wrote about Simone Biles back in 2016, when she was 19 years old and already the most accomplished American gymnast ever.

But that was before we knew that Biles was a survivor of sexual abuse — abuse the American gymnastics body knowingly enabled, abuse that Biles has been forthright about discussing, in public. Biles is now the most powerful voice in the sport of gymnastics, and she knows it.

The 2020 Olympics will likely be Biles’s last international competition. At 22, Biles is now six years older than several of her World Championship teammates, the only non-teenager on the squad.

Biles has won more World Championship gold medals in gymnastics than anyone, ever. She has raised the degree of difficulty for the entire sport. And more importantly, she demanded that the sport, and the American governing body that runs it, do better after it failed athletes like her in the most devastating of ways.

The most shocking line in Vice President Pence’s 2020 RNC speech
Netflix’s totally delightful Set It Up proves just how durable the romcom formula is
The fight over family separations proved how broken Trump’s America really is
The answer to America’s health care cost problem might be in Maryland
Tony Blinken, one of Biden’s most trusted aides, will be his secretary of state
Holiday shopping as we know it is over — just ask seasonal workers