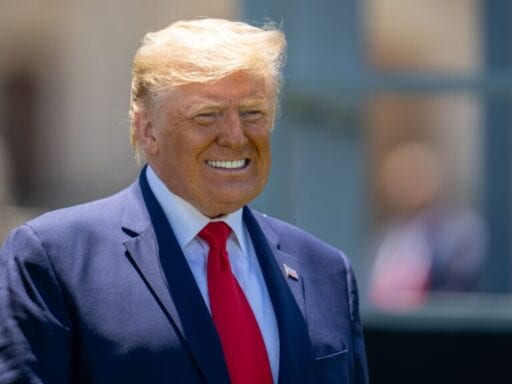 Some recent national polls have President Donald Trump down by double digits against former vice president and presumptive Democratic nominee Joe Biden. Perhaps most worryingly for Trump, even traditionally Republican states are beginning to slip back into the toss-up column.

Take Iowa, for example, which the president won by just shy of 9.5 points in 2016. Though the state hasn’t been heavily polled since the general election matchup was set earlier this spring, a June 9 poll from Civiqs shows Trump and Biden in a dead heat there. A June 5 Iowa poll by Public Policy Polling, meanwhile, has the president up by a single point, and a Des Moines Register poll on Saturday found incumbent Republican Sen. Joni Ernst down 3 points — though still within the margin of error — on her Democratic challenger, Theresa Greenfield.

Ohio is looking similar: Trump won the state handily in 2016, by about 8 points. Now, a recent Fox News poll shows him down by 2 points against Biden there.

In both states, as well as Arizona, the Trump campaign is reportedly worried enough about the president’s standing to spent a combined $1.7 million on advertising, according to a New York Times story from earlier this month.

The best the Trump campaign seems to be coming up with is sending cease-and-desist notices to news organizations over bad polls. Amid a chronically mismanaged pandemic and ongoing anti-racism protests, that means Trump could be in a lot of trouble this November.

A close race in states like Iowa is bad news for Trump, because while Democrats would surely love to pick up the Hawkeye State, which Barack Obama won in 2008 and 2012, this November, neither Iowa nor Ohio is generally considered an essential part of Biden’s path to 270 electoral votes. And in the battleground states that are a part of that path — Wisconsin, Michigan, and Florida, among others — Biden is looking even stronger.

In Michigan, things look even worse for the president: He’s down by 7.6 points according to the FiveThirtyEight average, and a recent EPIC-MRA poll showed Biden up by 12 points in the state.

And then there’s Florida, Trump’s home state since he changed his residence to Mar-a-Lago from Trump Tower in September 2019. On the surface, things don’t look quite as bad for him there: He’s down by just 2.5 points to Biden, according to the same FiveThirtyEight average spanning May 1 to June 11. Looking at June alone, though, paints a less rosy picture for Trump, who is losing by double digits in two of the three polls tracked by FiveThirtyEight to come out of the state this month.

Even in deep-red states that likely won’t be in play in November regardless of what happens in the intervening months, Trump’s approval rating has slipped. According to a daily tracking poll by Morning Consult that was active from January 2017 through February this year, the president’s net approval rating in Mississippi has fallen by 20 points since he took office. In Oklahoma, where he will hold a rally this weekend for the first time since the coronavirus pandemic, it’s the same — down by 20, though his net approval is still 14 points above water.

Those numbers don’t account for the past four months of turmoil in the US, but a more recent Oklahoma poll, which was conducted on June 3 and 4, does, and it shows Trump with a 19-point lead against Biden. That doesn’t sound like bad news for him, until you remember that Trump won Oklahoma by better than 36 points in 2016. Even Alabama, where Democrat Doug Jones is on the defensive in a tough Senate race, isn’t as excited about Trump as it used to be: The same Morning Consult poll shows the president’s approval down by 8 points since he took office.

Beyond his numbers in any one state, there are other warning signs for Trump. In 2016, he won voters 65 and older by 8 points; now, an Economist/YouGov poll that was in the field from May 31 through June 2 shows that lead down to just 3 points. And while Trump has never been strong with women voters — who went for Clinton by 12 points in 2016 — he’s now losing them by what CNN polling guru Harry Enten describes as a “historic margin,” about 25 points among registered voters.

With all of that in mind, the big picture is not a positive one for Trump: He’s on the defensive in a slate of must-win battleground states that delivered him an Electoral College victory in 2016, and formerly safe states like Iowa and Ohio are suddenly looking at least marginally competitive. As he loses ground in the polls, Democrats are also eyeing an expanded Senate map that could give them a better chance of taking back the upper chamber of Congress along with the White House in November. And all of this is occurring with a mishandled pandemic and a resulting global economic recession as the backdrop, which historically does not bode well for an incumbent president’s reelection chances.

Of course, it’s still more than four months until Election Day on November 3 — but as Vox’s Matthew Yglesias points out, things are looking better for Biden than they ever did for 2016 Democratic nominee Hillary Clinton, who enjoyed her own polling lead for much of the 2016 election cycle:

This Biden lead is different. If you’re up 10 points in the polls, then the polls could be off by 4 points (which would be a big but not mind-blowing error) and the Electoral College could have a 4-point skew toward Trump (which is at the upper range of plausibility but not totally out there) and Biden would still win. Basically, if you are up 10 in the polls, you are almost certainly going to win.

And right now, Biden is up 10 in quite a few recent national polls. Whether that’s still the case by November, though, is another question.

Trump threatens to permanently cut WHO funding if it doesn’t reform in 30 days
BTS’s new album is sublime comfort pop for the soul in lockdown
How Trump’s internet built and broadcast the Capitol insurrection
One reason why coronavirus is hitting black Americans the hardest
Mask mandates are crucial for fighting Covid-19. How should they be enforced?
The Supreme Court made the GOP’s new voting restrictions possible