Steve Bullock, the Democratic governor of Montana, is running for president 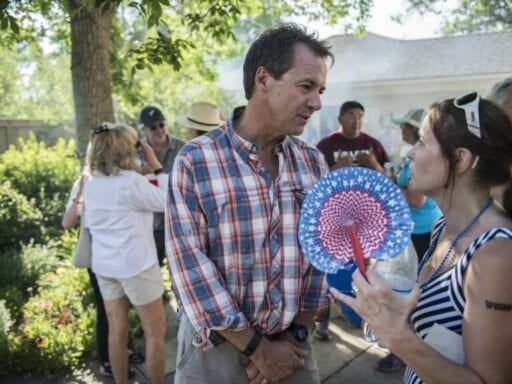 National Democrats want Bullock to run for Senate in Montana. He’s got his eye on the White House.

Shortly after wrapping up Montana’s state legislative session in May, Bullock announced his candidacy with a YouTube video.

Bullock has struggled to break through nationally; he’s one of three candidates who didn’t qualify for the first DNC debate, happening on June 26 and 27 in Miami. His campaign is pinning its 2020 hopes on a strong showing in the Iowa caucuses, but the massive field of candidates is presenting a tough dynamic.

“I think it’s going to be a tough sell because he is another white guy running for the Democratic nomination that not a lot of people know,” Lee Banville, a journalism professor and political analyst at the University of Montana, told Vox. “That’s going to be his struggle; how is he different from the other governor from out here with the same appeal but a weirder name?”

Meanwhile, national Democrats want Bullock to set his sights on the US Senate rather than the White House. They believe he’s their only real hope to defeat Republican Sen. Steve Daines, who is up for reelection in 2020 — but Bullock has shown absolutely no interest in pursuing the Senate seat.

In a politically polarized time, Bullock is running on his track record of working with Montana’s Republican-controlled legislature to get things accomplished that the deadlocked US Congress could only dream of: passing an infrastructure plan, Medicaid expansion, and a campaign finance reform bill.

And he’s leaning in on the issue of campaign finance reform, highlighting his efforts to beef up state election laws and increase transparency requirements for dark money groups. That’s his “big idea” for 2020 as well, according to his website.

If elected, Bullock has pledged to sign an executive order on day one of his presidency that mandates every company disclose all the money it’s spent or contributed to influence American elections. If they don’t follow that rule, they would risk being barred from contracting with the federal government.

“We need to defeat Donald Trump in 2020 and defeat the corrupt system that lets campaign money drown out the people’s voice, so we can finally make good on the promise of a fair shot for everyone,” Bullock said in his announcement video.

In a primary where some of the loudest voices are often hewing to the left, Bullock wants to bring America back to the center. It’s here, he says, that progress on policies like freezing in-state college tuition, passing affordable health care, and investing in infrastructure can actually happen — based on what he and Montana Republicans have gotten done.

“He governed successfully and governed well,” said David Parker, a political science professor at Montana State University. “Unlike any other Democratic candidate, he’s done so in a fairly red state. The closest would be Hickenlooper, but Colorado’s more of a Democratic state.”

Bullock’s track record on these issues has been fairly successful, but he’s also had a Republican-controlled state legislature willing to work with him — something that would be far from guaranteed if he became president.

One achievement the governor often touts is a 2015 campaign finance reform law that requires political groups to disclose their donors and spending on campaign ads. Then in 2018, Bullock signed an executive order targeting “dark money” groups and putting in more stringent transparency requirements for government contractors who spend during elections. That’s something House Democrats passed in their sweeping anti-corruption reforms package, HR 1. But actually getting HR 1 to be a law has been much more difficult, as Senate Majority Leader Mitch McConnell is determined to block it in the Senate.

Bullock is far from the only 2020 candidate with the message that bipartisanship produces results, but his campaign is hoping it will resonate in Iowa, which has a rural makeup similar to Montana’s and holds the nation’s first caucuses. While Bullock was unable to make it onto the first DNC debate stage, he has qualified for the second debate. And his campaign plans to build out infrastructure in Iowa, putting in the effort to meet the state’s voters in hopes of getting momentum there.

Why not the Senate?

National Democrats would dearly love Bullock to set aside his presidential ambitions and run for Senate instead, but the governor has so far shown no desire to do so.

Sen. Daines is up for reelection in 2020. A one-term senator, he has a decent 49 percent approval rating, per Morning Consult. He’ll certainly be a tough candidate to beat in conservative Montana, and Bullock is Democrats’ best shot to do so.

Trump’s approval rating may not be enough to drag down a Republican incumbent in Montana, but Bullock’s centrist image and high approval ratings make him the most sought-after candidate for the Senate seat. There are few other available Democrats — Kathleen Williams, who challenged Republican Rep. Greg Gianforte in 2018 and lost, is running for the same House seat again. Helena Mayor Wilmot Collins, the state’s first black mayor, has already announced his candidacy, but he’s a relative unknown compared to Bullock.

The perception that the Senate is stuck and not getting anything done has discouraged numerous Democrats from mounting a Senate campaign in 2020. Bullock, like other Democrats who have turned down Senate campaigns, seems to object to going from the position of state executive to being one cog in a machine that is frequently spinning its wheels.

He will try to run for president first. A lingering question is whether national Democrats will continue to pursue him for the Senate race if that doesn’t work out, and if he will ever accept.

The devastating detail hiding in the French grammar of Portrait of a Lady on Fire
Nothing is going right for Paul Manafort lately
The movement to make workers’ schedules more humane
25 cartoons to get obsessed with, now and forever
Facebook allowed companies to post job ads only men could see. Now that’s changing.
Manhattan is one of the best, most unheralded dramas of the 2010s