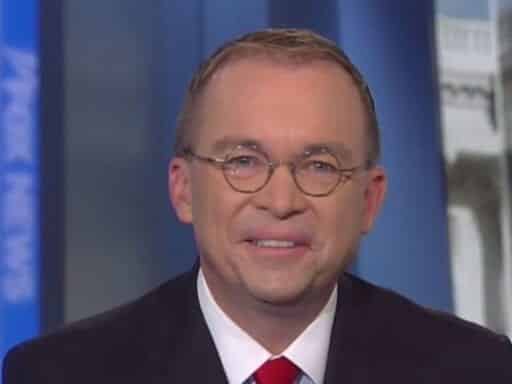 Mick Mulvaney and Mike Pompeo had a rough go of it on the Sunday news shows.

The Trump White House has had difficulty finding a cohesive response to House Democrats’ impeachment inquiry, and acting chief of staff Mick Mulvaney had a particularly rough time on Fox News on Sunday.

Tasked with denying something he said while cameras were rolling in the White House briefing room last Thursday, Mulvaney was in a tough position. But his efforts to spin those comments, which confirmed the White House used aid to Ukraine as leverage to get the Ukrainian government to do political favors for President Donald Trump, were still laughably weak.

Talking to Fox News’s Chris Wallace, Mulvaney insisted, absurdly, that he did not, in fact, confirm there was a quid pro quo with Ukraine because he didn’t actually use the phrase “quid pro quo.”

“Reporters will use their language all the time, so, my language never said ‘quid pro quo,’” Mulvaney said.

While Mulvaney may not have uttered the specific phrase “quid pro quo,” there’s no denying he confirmed there was one.

Let’s revisit what he said during the briefing last Thursday. In response to a question from ABC’s Jon Karl about whether a “demand for an investigation into the Democrats was part of the reason that [Trump] ordered to withhold funding to Ukraine,” Mulvaney said this: “[T]he look-back to what happened in 2016 certainly was part of the thing that he was worried about in corruption with that nation. And that is absolutely appropriate.”

“To be clear, what you described is a quid pro quo,” Karl pointed out. But Mulvaney was unbothered: “we do that all the time with foreign policy,” he said, confirming Karl’s characterization.

As Vox’s Alex Ward noted, on its face, this wouldn’t be a problematic move:

Many countries, including the United States, use whatever incentives they can to get what they want from both allies and adversaries. That an American administration made aid contingent upon Ukraine acquiescing to an American demand on its face isn’t malpractice.

What is problematic, however, is why the administration held up the aid. Mulvaney’s comments seemed to confirm the Trump administration hijacked foreign policy into something akin to an opposition research operation for the president’s reelection campaign by trying to get the Ukrainian government to investigate conspiracy theories involving Democrats and the Bidens. The comments also lent credence to a whistleblower complaint about Trump’s dealings with Ukraine that resulted in an impeachment inquiry.

Unsurprisingly, within hours of his briefing concluding, Mulvaney released a statement denying he said what he said. That unconvincing damage control operation continued on Sunday.

During his interview with Wallace, Mulvaney acknowledged the discrepancy between what he said on Thursday and what he’s saying now, but he insisted Wallace “go back to what actually happened in the real world” — the implication being that since aid to Ukraine was ultimately released without the Ukrainian government undertaking the investigations Trump wanted them to undertake, his confirmation that there was a quid pro quo doesn’t really matter.

But Trump only agreed to release the aid on September 11, two days after Michael Atkinson, the inspector general for the intelligence community, notified the House Intelligence Committee that he received a whistleblower complaint about Trump’s dealings with Ukraine, and he found that those accusations rose to the level of “urgent concern.” The same day leaders of three House committees announced they “launched a wide-ranging investigation into reported efforts by President Trump, the President’s personal lawyer Rudy Giuliani, and possibly others to pressure the government of Ukraine to assist the President’s reelection campaign.” While there are explanations for the timing of the aid’s release that aren’t necessarily nefarious, the timeline suggests the Trump administration may only have decided to release it once they realized that the Ukraine situation was about to develop into a major scandal.

Trump, for one, was reportedly unhappy with Mulvaney’s performance on Sunday — just as he was unhappy with his performance during the press conference last Thursday. CNN’s Jeremy Diamond reported on Sunday, citing an unnamed source familiar with Trump’s thinking, that the president is “increasingly frustrated with his chief of staff, and that Mulvaney is finding himself now increasingly on shaky ground.” Mulvaney, however, reportedly received a round of applause from other White House staffers during a meeting on Monday morning.

With regard to Trump’s frustrations about him, Mulvaney likely did himself no favors with the way he concluded his interview with Wallace. Pressed on Trump’s decision to reverse course and not hold next year’s G7 at Trump Doral, a resort the president still owns and profits from, Mulvaney said, “at the end of the day, [Trump] still considers himself to be in the hospitality business.”

“You say he considers himself in the hospitality business — he’s the president of United States!” Wallace replied, indignantly.

Mick Mulvaney tries to defend Trump’s original G7 Doral decision: “At the end of the day, [Trump] still considers himself to be in the hospitality business.”

Chris Wallace responds: “You say he considers himself in the hospitality business, he’s the president of United States.” pic.twitter.com/HDVyHz4GhS

Mulvaney wasn’t the only Trump official who struggled to explain last Thursday’s briefing on the Sunday news shows. On ABC’s This Week, after Secretary of State Mike Pompeo characterized Mulvaney’s confirmation of a quid pro quo as a “hypothetical,” host George Stephanopoulos pointed out to him that “it’s not a hypothetical … the chief of staff said it [happened].”

POMPEO: I’m not going to get into hypotheticals about what someone else said.

STEPHANOPOULOS: Except it’s not a hypothetical. The chief of staff confirmed aid was withheld for political investigations.

Vox Sentences: To infinity and beyond
The US and Canada haven’t budged on NAFTA
The rise of anti-trans “radical” feminists, explained
10 weddings a day: What it’s like to run a wedding chapel in Las Vegas
The Instacart strike, explained
Biden has a big lead in the polls, but can we trust them?