Texas’s election law could disenfranchise millions during a pandemic 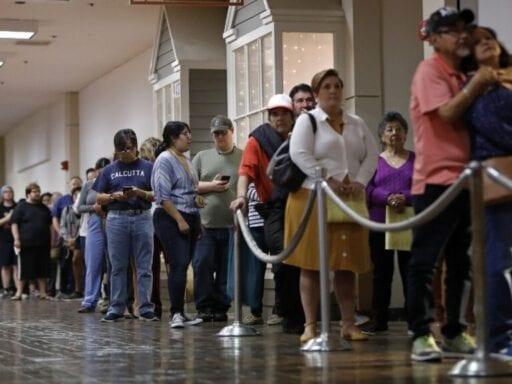 Share
Loading...
Voters wait in line to cast their ballots on March 3, 2020, in San Antonio, Texas. | Edward A. Ornelas/Getty Images

Texas’s absentee ballot law is utterly unfit for a state holding an election during a public health crisis.

Texas has one of the most restrictive absentee ballot laws in the country. Even under ordinary circumstances, this means that many Texans will have a tougher time casting a ballot than voters in most other states.

During a pandemic that could prevent millions of voters from venturing to the polls, however, Texas’s law could wind up disfranchising much of the state.

The law only allows Texas voters to obtain an absentee ballot under a very limited list of circumstances. Voters may obtain an absentee ballot if they plan to be absent from their home county on Election Day, if they have a “sickness or physical condition” that prevents them from voting in person, if they are over the age of 65, or if they are jailed.

It is far from clear that a healthy person who remains at home to avoid contracting coronavirus may obtain an absentee ballot.

Texas Democratic Party v. Hughs, a lawsuit filed by the state Democratic Party, seeks to fix this law — or, at least, to interpret the law in a way that will ensure that healthy people can still vote. But the lawsuit potentially faces an uphill battle in a state court system dominated by conservative judges.

All nine members of the state Supreme Court are Republicans, and Republican Attorney General Ken Paxton filed a motion seeking to intervene in the lawsuit — a sign that he intends to resist efforts to prevent this law from disenfranchising voters.

The stakes in this case are astoundingly high. As Texas Democrats note in their complaint, voters are “now heavily discouraged” from even leaving their homes “by various government orders and are being discouraged in an enormous public education campaign.”

Even if the pandemic were to end by July 14, when the state plans to hold several runoff elections, “certain populations will feel the need and/or be required to continue social distancing.” Millions of voters could potentially be forced to choose between losing their right to vote and risking contracting a deadly disease.

There is no federal law mandating that states provide minimal access to absentee voting, though Sens. Amy Klobuchar (D-MN) and Ron Wyden (D-OR) proposed legislation that would expand access to mail-in ballots during the coronavirus pandemic. As a result, states are largely free to decide how easy it should be to obtain an absentee ballot.

Five states — Colorado, Oregon, Washington, Utah, and Hawaii — automatically mail ballots to voters in the weeks before the election. Most of the remaining states have a “no excuse” absentee ballot regime, meaning that a voter has to affirmatively request a mailed-in ballot, but any voter many do so.

Texas is among the minority of states that require voters to give an excuse before they can cast a ballot. A little more than a dozen states require voters to justify their request for a ballot, according to the advocacy group Vote at Home. In Texas, the list of valid justifications is fairly short, and these exceptions are drafted fairly narrowly.

At least some states that require voters to justify absentee ballot requests have medical exemptions that are broad enough to accommodate voters who are staying at home during a pandemic. West Virginia’s law, for example, allows “any voter who is confined to a specific location and prevented from voting in person” to obtain an absentee ballot if their confinement is due to “disability, illness, injury, or other medical reason.”

In any event, Texas Gov. Greg Abbott (R) handed down an executive order this week that, in his words, “requires all Texans to stay at home” except for when doing certain essential activities. His order mirrors similar requests by state and local officials throughout the country. And even without such an order, many Texans will understandably be unwilling to risk their health to go to the polls.

Whether these Texans can get an absentee ballot could end up depending on how the courts interpret the phrase “physical condition.”

The Texas Democratic Party case turns on the meaning of two words that appear in a section of Texas law permitting people with disabilities to obtain absentee ballots: “a qualified voter is eligible for early voting by mail if the voter has a sickness or physical condition that prevents the voter from appearing at the polling place on election day without a likelihood of needing personal assistance or of injuring the voter’s health.”

On the one hand, the law explicitly labels this provision as an accommodation for people who have a “disability.” The words “physical condition” also appear in conjunction with the word “sickness,” which implies that those words should be interpreted to refer to some sort of disabling condition that only a subset of Texans possess. Often, when a law uses a general term in the context of other, more specific terms, courts will assume that the general term should be given a narrow reading — one similar to the specific terms.

On the other hand, the literal meaning of the words “physical condition” is much more expansive. As a team of civil rights lawyers argue in a motion suggesting that the state law should be read expansively, “everyone has a physical condition” that prevents them from appearing at their polling place during a pandemic — the physical condition of being susceptible to coronavirus.

Either one of these interpretations of the Texas law is plausible, and a judge could reach either conclusion using methods of statutory interpretation that are widely accepted as legitimate. One judge might argue that the words “physical condition” should be read expansively, because that is the ordinary meaning of those words. Another might argue that they must be read in context with words like “sickness.”

The problem facing the Texas Democratic Party is that, when a fair judge acting in good faith could legitimately read a law in two different ways, it is very easy for a partisan judge to choose the interpretation they prefer. And every one of the nine justices on the Texas Supreme Court is a Republican.

Because older voters tend to prefer the GOP, the Texas Republican Party has a clear interest in preserving a legal regime that allows voters over 65 to obtain an absentee ballot but makes it much harder for younger voters to do so.

That said, if Democrats lose this particular lawsuit, that does not necessarily mean that millions of Texans will lose their right to vote. It’s possible a federal court could rescue Texas voters in a separate lawsuit — one that most likely has not even been filed yet — holding that the unique burden the coronavirus pandemic imposes on voters renders Texas’s strict absentee ballot law unconstitutional.

In Florida Democratic Party v. Scott (2016), for example, a federal court extended the state’s voter registration deadline after a hurricane hit the state just five days before that deadline. A similar logic could be applied to the coronavirus pandemic. A federal judge in Wisconsin recently made several tweaks to that state’s election procedures in order to prevent voters from being disenfranchised by coronavirus.

But such an order could ultimately be appealed to the US Supreme Court. And the Court’s current majority isn’t especially friendly to voting rights.

The overarching problem underlying cases like Texas Democratic Party is that America’s election law simply was not drafted in anticipation of a public health crisis that would force most of the country to remain in their homes.

Until very recently, absentee ballots were not an especially partisan issue. The red state of Utah, after all, is extraordinarily friendly to voting by mail. Meanwhile, blue states like Massachusetts and Connecticut have absentee ballot laws that are arguably more restrictive than Texas’s. (Although the courts in those blue states are much more likely to be accommodating to voters facing disenfranchisement.)

Now that a crisis has arisen, however, many partisans are likely to seek advantage where they can. Texas Republicans, for example, have a lot to gain from an election regime that makes it easy for voters over 65 to vote, while simultaneously disenfranchising huge swaths of young voters. In 2016, Donald Trump won older voters by 7 points, even though he lost the overall popular vote.

Texas didn’t necessarily write its absentee ballot law with the goal of benefiting one party. But now that a pandemic is upon us, that law has profound partisan implications if it is not corrected.

Similarly, there are a number of election law doctrines that were simply not designed for an age when judges are having to decide, often on very short notice, whether to enjoin state voting laws while an election is looming. Potentially the most troubling is a rule the Supreme Court announced in Purcell v. Gonzalez (2006).

Purcell warned that judges should be reluctant to hand down decisions altering the rules a state uses to administer an election as that election draws close. “Court orders affecting elections,” the Court claimed, “can themselves result in voter confusion and consequent incentive to remain away from the polls. As an election draws closer, that risk will increase.”

But the number of people infected by coronavirus grows exponentially. And voting rights lawyers won’t necessarily be able to see the problems created by this pandemic coming until they are already happening. Judges will face novel questions, and will need to make quick decisions about laws that historically have not been especially controversial.

If they can’t adapt the law quickly, millions of Americans could be disenfranchised by election laws that simply were not designed with a pandemic in mind.

Hong Kong protests continue for a 10th week in face of Beijing’s threats
6 unanswered questions from William Barr’s summary of the Mueller report
Sanders backs Trump protests, questions Electoral College
How Anthony Fauci became the face of the pandemic — and its merch
Vox Sentences: Would you hire a company called Fraud Guarantee?
How the Supreme Court enabled police to use deadly chokeholds