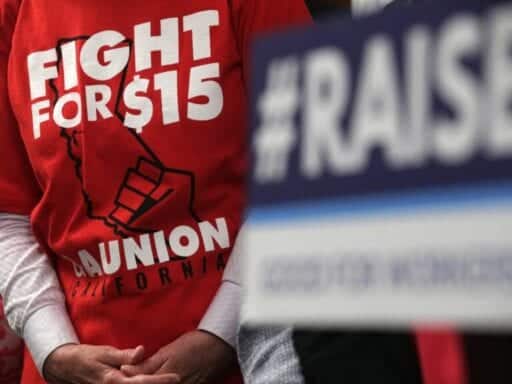 Republicans in the Senate won’t consider any wage increases.

It’s official: The Senate has no plans to raise the federal minimum wage anytime soon.

A spokesperson for Sen. Lamar Alexander (R-TN), who chairs the Senate Committee on Health, Education, Labor, and Pensions, told Vox that the committee is not considering a bill that would raise the federal minimum wage to $15 an hour, or any other increase, for that matter.

Republican opposition to the Raise the Wage Act in the Senate was expected, but the news essentially ends — for now — a years-long campaign to raise wages for millions of workers by lifting the current $7.25 minimum hourly wage.

Judy Conti, director of government affairs for the National Employment Law Project, said that blocking the bill will end up hurt Republican senators.

“Even the Chamber of Commerce acknowledges that it’s time to raise the federal minimum wage,” Conti wrote in an email to Vox. “[Alexander] may be retiring next year and happy to ride that time out without doing anything productive, but other members of the Senate don’t have quite the comfort level to be as complacent as he is.”

In the House, things went differently. A total of 231 members voted in favor of the Raise the Wage Act, including three Republicans, and 199 opposed it.

Its passage was a short-lived victory for fast-food workers, who have been pushing for a $15 minimum wage across the country for more than five years. And the bill would have had a huge impact on working families. It was expected to boost pay for 27 million US workers, lifting 1.3 million households out of poverty, according to an analysis released earlier this month by congressional economists.

But the sharp pay increase made some lawmakers nervous. The Congressional Budget Office said it could trigger 1.3 million job losses for low-paid workers. Yet most recent academic research suggests that’s unlikely and would lead to few if any lost jobs. To appease moderate lawmakers, House Democrats had amended the bill to phase in the $15 minimum wage over seven years instead of six.

But the Raise the Wage Act would have done much more than lift wages. It would have tied future changes to the minimum wage to changes in middle-class pay, and would have gone far in boosting paychecks for underpaid workers at a time when employers refuse to do so on their own.

Despite the bill’s unglamorous death in the Senate, its passage in the House is a major step forward for low-income families. And, depending on the outcome of the 2020 election, Democrats are likely to try again in a few years.

The Raise the Wage Act, explained

Congress set a record in June: It had been more than 10 years since lawmakers raised the federal minimum wage, the longest period in history that it’s stayed stagnant.

The current $7.25 minimum hourly rate was set in 2009, right in the middle of the Great Recession. Since then, America’s lowest-paid workers have lost about $3,000 a year when you consider the rising cost of living, according to calculations from the Economic Policy Institute.

Enter the Raise the Wage Act, which House Democrats introduced in January to raise the federal minimum wage to $15 an hour by 2024. The bill, which had more than 200 co-sponsors (all Democrats), also phased out the lower minimum wage for tipped workers such as restaurant servers and valets, which has been $2.13 an hour since 1996.

Big business groups have not been happy about the fight for $15. Neither have their Republican allies in Congress, who have long pushed back against any effort to raise the federal minimum wage.

But it’s hard to deny how popular the idea is with regular voters. Poll after poll shows widespread support for raising the federal minimum rate, even among Republican voters. And a majority of voters want at least $15 an hour. It’s no wonder why the vast majority of Democrats running for president have promised to double the federal minimum wage.

Corporate America must have sensed the shift in public opinion too. McDonald’s executives recently announced that the company would no longer lobby against minimum wage increases. The president of the US Chamber of Commerce said earlier this year that he was open to the idea of raising the pay floor.

For a while, Democrats were torn on how much to raise wages. Rep. Terri Sewell (D-AL) introduced an alternative bill in April, which would create different minimum wage levels depending on the region. Only businesses in the most expensive areas would have to pay workers at least $15 an hour by 2024. The main problem with that bill, though, is that every state needs to hike minimum pay. There’s really nowhere in the country where minimum wage workers can afford to rent a modest two-bedroom apartment if they work full time.

In July, however, Democrats signaled that they finally had enough members on board to pass the $15 wage bill.

The impact of raising the minimum wage is one of the most closely studied — and debated — subjects in economics.

It used to be taken for granted that raising the minimum wage would decrease the number of low-wage jobs, and that teenagers would have more difficulty finding part-time work. Economists published research in the 1970s showing that it did happen, likely because restaurants and department stores had to cut jobs and work hours to cover the cost of paying employees more.

But in the past decade, progressive economists have challenged these assumptions with new data that is now available.

Dozens of Democratic-held cities and states have increased the minimum wage floor over the years, well above the current federal minimum of $7.25 an hour. Recent research suggests the worst-feared consequences of minimum wage hikes did not come to pass: Employment did not decrease in places where wages went up, and there was actually a residually positive effect on wages for other lower-income workers.

However, disagreement often revolves around how extreme the job cuts would be. A white paper from Anna Godoey and Michael Reich at Berkeley in July provided more evidence that the impact on jobs is insignificant. (A recent Congressional Budget Office analysis, which forecast 1.3 million job losses from a $15 hourly wage, did not include findings from that study because it was only released in July.)

The Berkeley study found that raising the federal minimum wage to $15 an hour by 2024 would likely boost incomes for the poorest households in rural counties. They found no evidence that such a large wage hike would lead to significant job losses or fewer work opportunities.

The research of Godoey and Reich, who analyzed pay data for millions of households in more than 750 counties, stands out for several reasons. First, it’s the only major pay study that relies on county-level income data, making its conclusions more precise; previous research has focused almost exclusively on state-level data. More local data allowed researchers to get a better sense of what could happen in rural counties, compared to urban centers.

Second, it focuses on the impact of raising pay in areas with the largest share of minimum wage workers. Previous research has mostly focused on cities and states that have already raised the minimum wage, where workers tend to earn more money. And third, it’s the first research paper to analyze a wage hike as high as $15 an hour. Before, the highest pay rate studied was $13 an hour.

To find out how a $15 minimum wage might affect rural areas, researchers measured the gap between the minimum wage and the median wage in those areas if they had a $15 hourly pay floor. Then they compared it to places with a similar gap. That allowed researchers to calculate what might happen in rural counties. They found no negative effects on jobs.

In sum, “the US can absorb a $15 minimum wage without significant job losses, even in low-wage states,” Godoey told journalists in a conference call.

The study is hardly definitive, but it adds to a growing body of research that is challenging long-held assumptions about the impact of raising the minimum wage: specifically, the view that it would hurt workers more than it would help them.

The most recent meta-analyses on minimum wage increases, which analyze several research findings together, also suggest that the increases’ likely impact on employment would be minimal.

Take the 2016 study by economists at Michigan State University, which crunched data from 60 studies on the minimum wage in the United States since 2001. It concluded that a 10 percent increase in the minimum wage would likely reduce overall employment in low-wage industries by 0.5 to 1.2 percent.

Another meta-analysis comes in a highly anticipated study published this month in the Quarterly Journal of Economics by economists at the University of Massachusetts, University College London, and the Economic Policy Institute. They studied data from 138 cities and states that raised the minimum pay between 1979 and 2016. The conclusion is that low-wage workers received a 7 percent pay bump after a minimum wage law went into effect, but there was little or no change in employment. The study also showed that it would not cost jobs, even in states with large shares of minimum wage workers.

“We’re overdue for an increase that would boost growth and minimize income inequity,” Kate Bahn, an economist at the Washington Center for Equitable Growth, told Vox.

Here’s what the Raise the Wage Act didn’t do

The Raise the Wage Act was not perfect; there are millions of low-wage workers who would have gotten zero pay increase under the law. That’s because federal labor laws exempt so many workers from its protections.

It’s important to keep in mind that minimum wage laws enshrined in the Fair Labor Standard Act do not cover all workers, including those in the gig economy. Under federal law, businesses do not need to pay independent contractors and freelancers the minimum wage or overtime. Think Uber drivers and Instacart workers who are still arguing that they’ve been misclassified as independent contractors.

The Fair Labor Standards Act also excludes farmworkers and some domestic workers from the right to earn the minimum wage or get overtime pay. They were excluded as a concession to Southern lawmakers, whose states were highly invested in paying low wages to these groups of workers. At the time, that workforce was overwhelmingly black and Latinx, and excluding them from a minimum wage was intentional. Today, about a quarter of farmworkers and 67 percent of housekeepers earn less than the minimum wage.

Why we still don’t know how deadly this new coronavirus is
How Obamacare became Democrats’ most powerful political weapon
Newt Gingrich just revealed what the Kavanaugh fight was really about
This week’s movie releases are astoundingly good
What “home for the holidays” means during a pandemic
States vs. Trump on economic reopening, France extends lockdown: Tuesday’s coronavirus news