Why is Halloween starting in the summer? 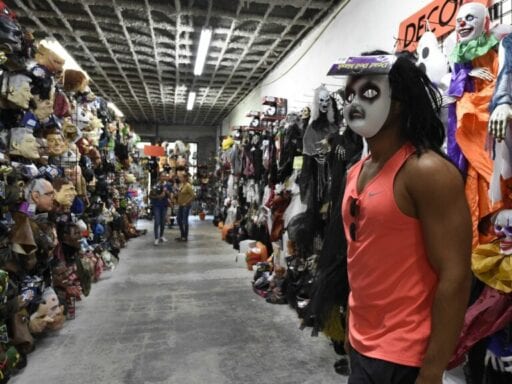 Target, Michaels, and Pinterest are already in the spooky spirit.

To many, late July might seem like peak pool-float season, a time for spiked seltzer and SPF, and the halfway point of summer (which it is). For others, though, this point in the calendar means one thing: It’s finally time to start Halloween shopping.

”Tomorrow is August…so…it’s basically Halloween,” Target tweeted on the last day of the month, garnering more than 10,000 likes and 4,000 retweets. There were a few “too soon” replies, and many Taylor Swift stans chiding the retailer for skipping over her album release date, but mostly, people were very much on board with the sentiment.

Earlier in the month, Target started pre-orders for its Hyde and Eek! Boutique, including a range of adaptive costumes for kids with disabilities. While the product won’t hit stores until late August or mid-September, depending on the location, there are other parts of the mall where the jack-o’-lanterns and cobwebs are already out in full force.

At Home, the “home decor superstore,” was perhaps first to kick off the season, stocking shelves with spooky merch as early as May 31. The crafts chains Michaels and Joann started in mid-July, leaving customers ample time to buy supplies for DIY projects. Shortly after that, Bath & Body Works debuted its Vampire Blood soaps and Ghoul Friend scented candles, and in early August, Spirit Halloween’s 1,300 or so pop-ups began haunting the corpses of dead stores across the country.

For people like Miranda Enzor, who runs the blog Spooky Little Halloween, the season couldn’t come soon enough. “I walk into places like Michaels or Joann, all these big-box stores that do Halloween every single year and put it out ridiculously early, and it’s my happy place,” she says. “I feel like I belong in the world more than any other time of the year, so just seeing that echoed back at me off the store shelf, it makes me happy. And I think a lot of people who love Halloween as much as me feel the same way.”

Last year, after noticing the interest in her “Halloween hunting” posts tracking merch arrivals in stores like Michaels and Home Goods, she started putting out a “shopping cheat sheet” for readers in her quarterly Halloween zine, listing retailers’ approximate on-sale dates.

While most of the population may not be rushing to deck out their homes in orange and black in the middle of summer, the share of Americans starting their Halloween shopping in September or earlier has been creeping up: Last year, according to the National Retail Federation, 37.1% of consumers said they planned to shop before October, the highest figure since the organization began collecting the data in 2013.

Part of this early interest could be due to the internet. On Pinterest, Halloween generates 933 million saved Pins and 227 million searches per year, and the “peak advertising opportunity” for marketers begins in June. I’ve worked at sites that publish roundups of costume ideas and party tips, and we had to get them up by mid-August for the Pinterest crowd and September 1 for Google search.

In certain cases, shopping early is a necessity. Etsy seller Renee Hanks says she’s already seeing orders pick up for Halloween; she expects to make over 1,000 kids’ costumes this year through her shop BooBahBlue, but says that number would likely be even higher if she didn’t have to close up shop a couple of weeks before the holiday to accommodate the demand.

”I get a lot of repeat customers during this time of year, as well as those who missed out last year because they tried to order too late and got denied,” she says. “The ones who try to order mid-October are generally those new to the handmade market and first-time mothers who, in the delirium of motherhood, just completely lose track of time and forget to order.”

Sara Carter, who runs the shop TheCostumeCafe, says she starts fielding about one order per day in July, with the real surge beginning in late August — timing she correlates to the start of the school year. Many of the earliest orders are for infant sizes, she says, reasoning that moms tend to be excited about “baby’s first costume.”

”I’ve always had early moms ordering, but I definitely think there is added pressure to find something cute, unique, and Instagrammable in the last few years,” she says. “I was shocked in the beginning how much people were willing to pay and how much thought people put into costumes. I grew up with a single mother in the ‘80s, so every costume I had was last-minute.”

“I definitely think there is added pressure to find something cute, unique, and Instagrammable in the last few years.”

According to an Etsy spokesperson, Halloween-related searches on the site climb in September, peak first week of October and taper off through the rest of the month.

Getting in ahead of time is usually less essential if you’re shopping at a big-box chain, but there can still be advantages to beating the crowds. Target, for instance, has already sold out of pre-orders for many of its Halloween items, including both of the adaptive costume wheelchair covers (though it’s adding more stock for the official release date on August 22).

Pre-orders help retailers gauge customers’ interest in particular items so they can plan their inventories accordingly, which is why you might see them months ahead of a holiday.

While it’s tempting to think that mall stores are pushing Halloween earlier and earlier every year, Target, at least, says this is not the case. According to a spokesperson, the timing “is consistent with past years and with other retailers. This is based on the fact that guests have told us they are planning for Halloween and want to preorder select items online in late summer and then have the opportunity to purchase in our stores in early fall.”

In 2007, another spokesperson told the New York Times that Halloween products were available in Target stores beginning in early September and online August 1 — later than today, but only by about two weeks. (These things can also vary store to store, depending on when other seasonal merchandise is cleared out, and back then, you didn’t have eagled-eyed shoppers tweeting out store displays.)

The retail industry, as a rule, always works months ahead of the actual calendar.

Michaels and Bath & Body Works didn’t respond to requests for comment, but past blog posts suggest their timing has remained relatively dependable (which is to say, early), at least for the past decade.

The retail industry, as a rule, always works months ahead of the actual calendar, which is why you can walk into most clothing stores today and be met with racks of cozy sweaters. This is particularly obvious in the lead-up to the holiday months, when snowmen and Christmas trees start cropping up in-store displays as early as September.

The “Christmas creep” is a well-documented phenomenon, with media outlets reliably griping about retailers pushing months-early holiday promotions (and even worse, holiday music) for decades, despite evidence that the practice has been around since the Victorian era.

Consumers are wise, however, to the fact that the holidays are retailers’ biggest sales season, which may be why they’re particularly critical of all the hoopla around it. Funnily enough, this may actually cast Halloween promotions in a better light.

”Even if you don’t like Halloween, you have to appreciate its position as the sole thing keeping Christmas from advancing even earlier into the year like a cancerous growth,” wrote Tumblr user kvitoya, to which another user responded, “The goth kids hold the line.”

As for Enzor, “I am definitely guilty of being one of those people that’s like ‘Ah, it’s too early for Christmas.’ For sure with the music,” she says. “But I also feel like I can’t be one of those people anymore, because I found Halloween at the end of May this year in a store and I was like, ‘Oh my God, it’s coming. Yay!’”

This phenomenon isn’t unique to people who count the days until October 31. “For many, Halloween in-store displays symbolize a welcomed return to normalcy. A return to the routines of school and work, the ones that were left behind during summer as families attempted to relax, bond as a unit, and escape hectic schedules,” says Ross Steinman, a consumer psychologist and professor at Widener University. “Halloween is a ‘cozy’ time of year as the weather changes to cool and crisp, and it serves as a psychological marker of time.”

The holidays, by comparison, are often anything but “routine” and “restorative.” Instead, says Steinman, they “can be a stressful time where estrangement or loss of loved ones is often magnified and family conflict resurfaces. … Consumers might express anger about early Christmas displays because it can bring these wounds to the surface.”

There’s also the expense — between gifting, entertaining, and the now-week-long shopping event that is Black Friday, consumers said they planned to spend about $1,007.24 per person during the holiday season, compared with around $90 for Halloween.

Suddenly, all those skeletons and haunted houses don’t seem so scary after all.

Mark Zuckerberg is spending millions like never before to overhaul a landmark law
White women’s role in white supremacy, explained
The stunning new texts, documents, and impeachment evidence released by the House, explained
Trump reportedly told Russia he didn’t care about 2016 election interference — and aides buried the ...
How Trump’s internet built and broadcast the Capitol insurrection
Disneyland is closing amid Covid-19 fears