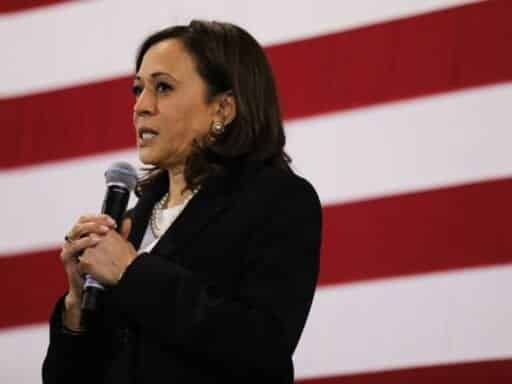 They were all a potent reminder the Senate is a big problem for Democrats.

Again and again during her MSNBC town hall Tuesday night, Sen. Kamala Harris (D-CA) reminded voters and was reminded herself that the United States Senate is a sizable obstacle to any Democratic agenda.

“2020 is about the White House but it’s also about the United States Senate,” Harris told the audience in Spartanburg, South Carolina.

The California senator made the case for her 2020 presidential candidacy. Harris defended her plan to stop states from restricting abortion rights, called the family separation crisis “a human rights abuse being committed by the United States government” and promised to prosecute the case against Donald Trump and his associates if elected.

But the specter of the United States Senate — and the difficulty Democrats will have securing a bare majority, much less a 60-vote filibuster-proof supermajority that can pass everything without Republican buy-in — hung over much of the conversation. It would be a barrier to Harris’s plan to require states to get preclearance from the Justice Department before they could institute new abortion restrictions. It makes impeachment exceedingly unlikely unless there is a dramatic shift in Republican leadership’s political calculus.

The town hall discussion was meandering, to put it generously. Harris fielded vague questions from MSNBC host Lawrence O’Donnell about the news of the day, including Mitch McConnell’s comments about filling a Supreme Court vacancy in an election year and GOP Rep. Justin Amash’s call for impeachment. The show ended with a (perhaps tongue-in-cheek) audience query about whether Harris would make MSNBC host Rachel Maddow her vice president. It was not the deepest policy debate.

But there were a few notable moments, starting with a question about the plan to protect abortion rights that Harris rolled out earlier the same day.

As states pass new restrictions that would outlaw all but the very earliest abortions, Harris’s campaign announced Tuesday her proposal to prevent states from interfering with women’s ability to get an abortion.

States with a history of restricting abortion access would have to receive permission, or preclearance, from the US Justice Department in order to enact new abortion laws. Her plan is explicitly based on the Voting Rights Act, which had required states with a history of systematic racial discrimination get the DOJ’s okay before they instituted new election laws.

But that part of the VRA was invalidated by the Supreme Court in 2013, with Chief Justice John Roberts saying the days of Jim Crow laws were too far in the past to be held against the states now. O’Donnell — after noting such a proposal would somehow need to pass the Senate — asked how Harris’s plan would navigate that precedent.

Harris noted that her plan would require states to seek preclearance based on the last 25 years, a stipulation that explicitly caters to the standard Roberts set in his VRA decision.

After that, she said the Justice Department would evaluate new state laws on one question: “Are they conforming with the Constitution as interpreted by the Supreme Court?”

Harris used the strongest possible language to condemn the Trump administration’s policy of separating migrant parents from their children when they try to enter the United States, which sparked an outcry in 2018.

“That was a human rights abuse being committed by the United States government,” Harris said, “and it’s against the moral and values of who we are as a nation.”

Later, she endorsed comprehensive immigration reform, although she didn’t explain exactly what that would mean except to say there should be a pathway for undocumented immigrants to become United States citizens. She did note that such a plan had received bipartisan support in the past; an immigration bill passed with 68 votes back in 2013. (It went on to die in the Republican-held House.)

In terms of a major bill that could conceivably get buy-in from both parties to clear the Senate’s 60-vote threshold, immigration would rank high. But Trump won the Republican primary running on a virulently anti-migrant campaign and some of the GOP supporters of that 2013 bill (John McCain, Lamar Alexander) will no longer be in the Senate in 2021.

Once again, the difficulty of the Senate for Democrats sneaks up on Harris’s (and any other Democrat’s) plans.

3) “The evidence supports the prosecution of that case.”

A Democratic voter asked Harris if she would support impeaching Donald Trump and seeing the process through to the very end, no matter what the outcome in the Senate, which would be left to decide whether or not to remove Trump from office if the House did vote to impeach him.

Harris, who already urged the House last month to start impeachment proceedings, said she would.

The voter also asked if Harris as president would prosecute Donald Trump or any of his close associates for any wrongdoing uncovered by federal investigators or Congress. (A lot of inquiries are ongoing, even with special counsel Robert Mueller finished.) This is starting to become a regular subject for Democratic candidates; Montana Gov. Steve Bullock, who is also running for the nomination, said recently he would not pardon Trump if elected.

“The evidence supports the prosecution of that case,” Harris said. “There needs to be transparency, accountability … There is a lot of work to do and I plan on seeing it through.”

Democratic candidates generally seem to prefer talking about health care or giving teachers raises or confronting big corporations, not Robert Mueller or Russia, on the campaign trail. But some Democratic primary voters are starting to press candidates for answers to some of those prickly questions.

In the meantime, of course, the Senate makes Trump’s removal from office before the 2020 election almost assuredly a non-starter, no matter what the House decides to do.

“You’re right to mention the United States Senate,” Harris told the voter. “I am fully aware of the Senate configuration.”

4 primary races to watch in Pennsylvania
“This is clear rigging”: candidates dispute Pakistan’s election as Imran Khan claims victory
Boris Johnson is making good on his Brexit plans
Why staying cold is so important to a Covid-19 vaccine
The new Supreme Court term starts next week. Expect fireworks on abortion, LGBTQ rights, and immigra...
The isolation of 2020 is doing weird things to our bodies