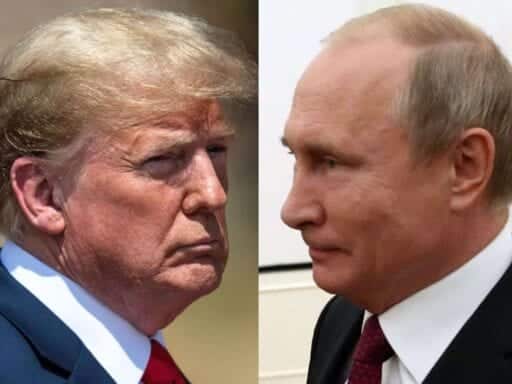 US President Donald Trump will meet Russian President Vladimir Putin in Finland next week in one of the most anticipated summits in years.

The two leaders will likely discuss Russia’s meddling in the 2016 presidential election; how to wind down the war in Syria; Moscow’s annexation of Crimea and broader incursion into Ukraine; and how to reduce the number of nuclear weapons around the world.

That’s a lot to pack in to a four-hour meeting on July 16 in Helsinki, and it’s unclear what they will — or won’t — agree to. But the question on everyone’s mind is, which one is going to have the most success advancing their agenda?

Experts say the Russian will likely outperform the American.

“For Putin, Trump is a kind of a useful idiot,” says Andrei Kolesnikov, a Russia expert at the Carnegie Moscow Center think tank. An unnamed State Department official echoed that sentiment in a Friday interview with the New Yorker: “Our guy here is like an amateur boxer going up against Muhammad Ali.” Of course, it’s possible Trump and Putin both get positive results from their meeting.

Here’s a guide to the topics that are likely to come up during Trump and Putin’s face to face meeting, and what to expect as a result.

1) Russia’s interference in the 2016 presidential election

Last Friday — just three days before Trump is supposed to meet face-to-face with Russian President Vladimir Putin — Mueller announced indictments against 12 Russian spies, accusing them of interfering in the 2016 US presidential election.

Mueller says the 12 men, who are all officers in the GRU, Russia’s military intelligence agency, hacked the computer networks of Hillary Clinton’s campaign, the Democratic National Committee, and the Democratic Congressional Campaign Committee.

They allegedly coordinated to release damaging information to sway the election, though Deputy Attorney General Rod Rosenstein told reporters it’s unclear if their efforts changed the outcome of the election.

The hacking issue — and Russia’s election interference more broadly — is bound to be the biggest issue of Trump and Putin discuss.

The president says he’ll “of course” mention it, but expects Putin to push back. “What am I going to do? He may deny it,” Trump told reporters at the NATO summit on Thursday. “All I can do is say, ‘Did you?’ And, ‘Don’t do it again.’ But he may deny it.”

It wouldn’t be the first time: Putin denied his country tried to sway the election when he and Trump met at the G20 summit in July 2017 — and Trump believed him.

Russia continues to say they had nothing to do with Meddling in our Election! Where is the DNC Server, and why didn’t Shady James Comey and the now disgraced FBI agents take and closely examine it? Why isn’t Hillary/Russia being looked at? So many questions, so much corruption!

That’s astounding, considering all the evidence that proves Putin lied to the president’s face. Three US intelligence agencies concluded last year that Russia interfered in the election, and the GOP-led Senate Intelligence Committee backed that assessment this month.

There’s also special counsel Robert Mueller’s ongoing investigation into whether or not Trump’s presidential campaign colluded with Russia to win the White House. Mueller has indicted at least 32 people, 13 Russian nationals on conspiracy charges for using the internet to divide the American public among political, racial, and class lines.

None of that will stop Putin from denying meddling allegations — or stop Trump from trusting him.

Trump wants US troops out of Syria. Putin wants his ally, Syrian President Bashar al-Assad, to stay in power after seven years of civil war. The two leaders may strike a deal, but it will likely be a bad one for the US.

Here’s the background: America’s roughly 2,000 troops in Syria are there to defeat ISIS. They do so mainly by supporting Kurdish forces who have taken the lead in the anti-terror fight, and also working with other countries as part of an anti-ISIS coalition.

However, the US is also on the side of fighters that want to remove Assad. That pits the US against Russia, which serves as Assad’s main military and political backer during the seven-year-long civil war.

So it’s not surprising Trump would want to speak with Putin about Syria. What is surprising is the kind of deal they might make involving their involvements in the conflict.

Here’s what the agreement may look like: Russia promises not to attack the small contingent of US-backed fighters in southwest Syria near the border with Jordan, an area known as the Daraa province, that pro-Assad forces recaptured this week. If that actually happens, it would give Trump space to withdraw US troops that ostensibly support anti-government forces.

But that’s not all: Trump also wants Russia to ensure that no more fighting between anti-Assad rebels and pro-regime forces happens in southwest Syria and that Iranian proxies, like Hezbollah, cannot enter the region.

Israeli Prime Minister Benjamin Netanyahu, who just met with Putin, said on Thursday the Russian leader had agreed to keep Iran at bay during their talk.

What would Trump offer in return? Well, he wouldn’t impede Moscow’s efforts to help Assad consolidate control of the country, even though US troops are mostly focused on defeating ISIS in Syria anyway.

Here’s why all of that is troublesome.

First, Russia has backed out of several Syria peace deals with the United States. It’s very hard to trust Moscow’s word that it will help de-escalate violence in Syria, since the Kremlin continues to support Assad — even as he kills his civilians with chemical weapons. Russia also wreaks havoc of its own by dropping bombs near US troop positions.

And second, Russia and Iran are allies in Syria because of their support for Assad. It’s hard to believe the Kremlin would suddenly work against Iran solely to make a deal with the United States, unless Putin extracts a big concession from Trump.

That concession wouldn’t come from Syria at all, but actually from Ukraine.

In February, the US Embassy in Ukraine tweeted, “We will never recognize Russia’s attempted annexation of Crimea, and remain steadfast in our support of Ukraine’s sovereignty and territorial integrity.

In June, Trump reportedly told leaders at the G7 summit in Quebec that Crimea might as well belong to Russia because the majority of people there speak Russian — a talking point straight out of the Kremlin. And at the NATO summit on Thursday, Trump said whether or not the US should recognize Crimea as part of Russia was “an interesting question,” citing how Russia built bridges to the southern Ukrainian peninsula and a submarine port.

Russia spends a lot of time spreading propaganda to convince Crimeans, Russians, and the world that the peninsula forms part of Russia. In one extreme instance, Putin drove a bright orange truck across a new 11-mile bridge that connects mainland Russia to Crimea and broadcast it to the world.

His message was simple: I own this place now.

That’s why it would be a stunning decision for Trump to side with Putin on Crimea. Russia’s 2014 annexation of the peninsula was the first time since World War II that a country annexed the territory of a European state. Should Trump basically say “Sure, Putin, it’s yours,” it would turn the entire post-war period on its head, because the US would effectively approve the hostile takeover of territory.

That could even embolden Russia to consider taking other territory in Europe, including parts of Eastern Ukraine. It’s unclear if Trump can unilaterally agree that Crimea forms part of Russia: In July 2017, Congress legislated that the US can “never recognize the illegal annexation of Crimea by the Government of the Russian Federation.”

But regardless, if Trump says that Crimea is part of Russia — or at a minimum refuses to push back on that point — it would be a huge propaganda win for Putin.

There’s a chance for a positive outcome of the summit: the extension of the New Start nuclear treaty between the US and Russia.

New Start, which stands for the Strategic Arms Reduction Treaty, is an arms control deal that came into effect on February 5, 2011, during the Obama administration. The treaty’s goal, essentially, is to limit the size of the American and Russian nuclear arsenals, the two largest in the world.

It allows Washington and Moscow to keep tabs on one another’s nuclear programs through stringent inspections and data sharing — thereby curbing mistrust about each other’s nuclear and military plans.

The treaty is currently in effect until 2021, but there’s an option for the leaders of both countries to extend the accord up to five years. If the treaty expires in three years, though, both sides lose crucial information about each other’s nuclear programs.

The Helsinki summit would be a good time to strike a nuclear deal between the two countries, because they’re effectively in an arms race, experts tell me.

Trump plans to develop newer and smaller nuclear bombs, in part to make them more usable. Putin, meanwhile, has announced plans to create an “invincible” nuclear-tipped missile that can evade any of America’s defense systems.

New Start doesn’t limit the creation of those kinds of weapons, but it would still place some caps on the most powerful ones both countries have.

That’s why most nuclear experts would prefer Trump strike this deal. “It ought to be a no-brainer,” says Kingston Reif, a nuclear proliferation expert at the Arms Control Association.

So the Trump-Putin summit will likely be a substantive one. But the hope is that the meeting is remembered for the right reasons, and not for Putin giving Trump a masterclass in diplomacy.

Rock and roll icon Little Richard has died at 87
The race for presidential delegates has officially begun. Track them here.
Syria has confirmed its first cases of coronavirus. An outbreak there would be hell.
The right-wing populist wave is a threat to the climate
Asymptomatic coronavirus spread is real
What you’re feeling is grief