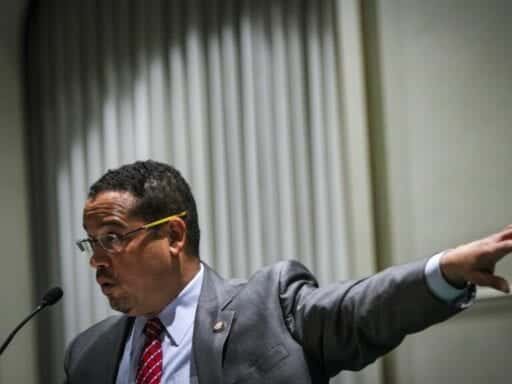 Why the media has been reluctant to assert whether new claims of domestic violence are credible.

Rep. Keith Ellison (D-MN) was considered the favorite to win a five-way Democratic primary for attorney general in Minnesota on Tuesday; then he was accused of abuse by a former girlfriend — an accusation he vehemently denies.

On Saturday night, the son of Ellison’s ex-girlfriend Karen Monahan, wrote a lengthy Facebook post saying that he saw a video of Ellison grabbing his mother and swearing at her in a bedroom.

This is the second time Ellison has been publicly accused of domestic violence. Another woman, Amy Alexander, spoke out in 2006, going public with her account that Ellison verbally abused her while having an affair with him. She also said he grabbed and pushed her during an argument. Ellison denied even having a relationship with her.

There are several similarities between the accounts: both women were involved in Minnesota progressive politics; they described Ellison losing his temper, using threats, verbal harassment, and violence.

But unlike other cases in the #MeToo era, where media outlets, in many cases, have asserted that women endured sexual harassment, assault or other abusive behavior, the media has been much more ambivalent about asserting whether the claims are reliable.

In the recent case, for example, reporters at local and national outlets haven’t been able to review evidence Karen Monahan herself has pointed to — and thereby confirm whether the alleged abuse took place. Monahan has said she won’t release the video that her son described in the Facebook post. And while she has released dozens of text messages she and Ellison sent to each other, they don’t specifically corroborate violence or verbal abuse. Some texts are obviously cropped in the middle of an exchange.

Ellison had appeared to be in a strong position in the Minnesota attorney general’s race as of last week. He’d secured the endorsements of Sen. Tina Smith, Gov. Mark Dayton, and 24 current Minnesota state legislators. Sen. Bernie Sanders (I-VT) campaigned with him, drawing a crowd of hundreds. Polling is scarce in the (normally) quiet race for state attorney general, so it’s difficult to say exactly where Ellison stands as voters head to the polls.

What we know about the new allegations

Karen Monahan had been posting for weeks on social media about an abusive relationship in her past, but she hadn’t named the man. She confirmed her son’s statement in a Sunday tweet, mentioning Ellison and adding, “you know you did that to me.”

“Karen and I were in a long-term relationship which ended in 2016, and I still care deeply for her well-being,” Ellison said in the statement.

Monahan also released a lengthy statement to local outlet Fox 9, painting a picture of a long-term relationship that was emotionally abusive and took a physical toll by the time she left Ellison in January 2017. In her statement, she said the relationship had taken a toll on her mental health, and resulted in “complex PTSD.”

In the post, Monahan alleged Ellison was unfaithful and characterized his behavior as “pathological lying, cheating,” and “smearing my name.” She also talks the specific incident of alleged abuse, which she said occurred in 2016.

At the center of this controversy is the alleged video that Monahan and her son both say captures domestic abuse.

The video “showed Keith Ellison dragging my mama off the bed by her feet, screaming and calling her a “f**king bitch” and telling her to get the f**k out of his house,” Austin Monahan wrote in his Facebook post. But in a later interview, he said he didn’t have the footage.

Karen Monahan says the video exists, but in an interview with Minnesota public radio station MPR News, she said she doesn’t plan to release it.

“It’s humiliating, it’s traumatizing, for everyone’s family involved, and for me,” she told MPR on Monday. “It sets the expectation for survivors of all kinds of forms of abuse, whether it be abuse toward women, abuse from police officers, abuse from other people in power, to have to be the ones, like I’m doing right now, to show and prove their stories. It’s feeding into that.”

CNN has been trying to verify the existence of the video, but so far, Monahan has been giving shifting answers as to where the tape is. Here’s what we know about the video, from CNN’s Andrew Kaczynski and Nathan McDermott.

[Monahan] said that alleged physical altercation was the incident her son referred to involving Ellison allegedly pulling her off the bed and cursing at her. Monahan said she discretely recorded the video on her cell phone and then uploaded it onto her computer.

Monahan said Saturday that she did not know where the video was because she misplaced it when moving. Monahan also said she would not want the video made public in any case, calling it “embarrassing.”

Asked again on Monday about the video, Monahan said she put it on a flash drive and packed it up in her previous home and couldn’t immediately find it because it was in storage.

”It’s not on me to show embarrassing and traumatizing video that impacts both families,” Monahan told CNN on Monday.

“This video does not exist because I never behaved in this way, and any characterization otherwise is false,” he said in a statement.

Vox contacted Karen and Austin Monahan for comment, but neither returned requests by publication time.

Monahan released a batch of 100 text and Twitter messages between her and Ellison to MPR News. Many of those messages discussed the breakup; some were positive, while others were not. But, as reporter Briana Bierschbach noted, “there is no evidence in the messages reviewed by MPR News of the alleged physical abuse.”

In one exchange, Monahan told Ellison she wanted to write about their “journey” in a chapter of her book, which he called a “horrible attack on my privacy.” Public documents on the alleged incident are also scarce — there are no police reports or court documents confirming the incident, according to MPR News.

Monahan has also shared text various messages between Ellison and herself on Twitter. While one of Monahan’s texts references the alleged altercation and the video captured, Ellison did not respond to the text, according to MPR.

Other texts Monahan posted show Ellison’s contact information listed as “Dc” and are allegedly sent around April 2018. As Vox’s Emily Stewart noted, some of the text messages appear to be cut off, including ones referencing her son Austin.

This isn’t the first allegation of abuse against Ellison

After local and national outlets picked up Monahan’s allegations, some on Twitter pointed out this isn’t the first time a woman has accused Ellison of mistreatment and abuse.

In 2006, Ellison went to court with Amy Alexander, a Democratic activist, who said she first met Ellison in 1993 and started an extramarital affair with him. At the time, Ellison was married to Kim Ellison, whom he divorced in 2010.

On June 2005, Ellison took out a two-year restraining order against Alexander, and a year later, she filed a petition for her own restraining order in September 2006 (shortly before Ellison’s primary for the US House). In October 2006, Alexander wrote an article for a monthly Minnesota newsletter called the Wright County Republican, detailing her alleged years-long relationship with Ellison.

Alexander said Ellison came to her house uninvited in June 2005, grabbed her, pushed her out of the way, and broke her screen door as he left her home. However, Alexander’s allegations also weren’t independently verified, as MPR News pointed out at the time.

Ellison denied that he was romantically involved with Alexander, and also maintained he had never been to her house or assaulted her. A 2006 court filing by Ellison’s lawyer accused Alexander of trying to blackmail his campaign.

Voters will head to the polls on Tuesday with the allegations hanging over the attorney general’s race. Before Saturday, Ellison was seen as a rising Democratic star — a progressive who understood the Democratic Party’s shifting center, and had made a name for himself as vice chair of the national party.

Whether he’ll stay a rising star in the Democratic Party or burn out on Tuesday is an open question.

How coronavirus could force the work-from-home movement
McDonald’s rolls out meatless Beyond burgers in Canada
You’re single. You live alone. Are you allowed to have a coronavirus buddy?
Delta’s CEO says the Boeing 737 Max 8 scandal has “traumatized” the aviation industry
Netflix’s Death to 2020 rehashes jokes we all spent the last 12 months making
What to do with your kids when schools are canceled